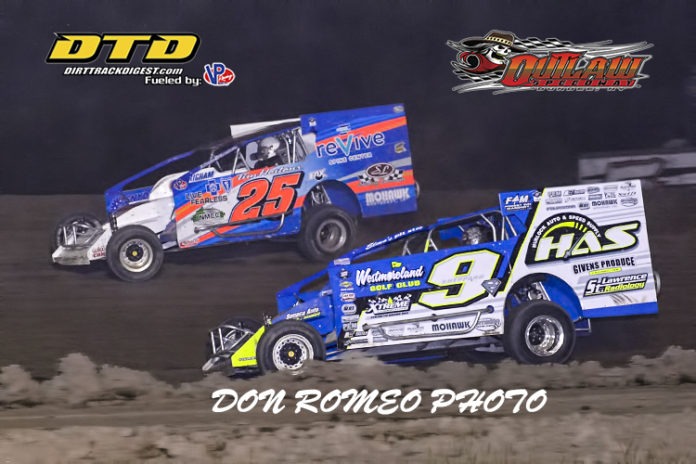 DUNDEE, NY – Even with an early pit stop, Matt Sheppard didn’t need all 30 laps of the Modified feature at Outlaw Speedway to get to the front, snagging the lead at halfway and never looking back en route to his third win of the year.

Jim LaRock led Ron Cartwright in the early laps of the Modified main, with Erick Rudolph and Danny Johnson slotting into third and fourth. A quick yellow on lap three sent a few top runners to the pits, including Alan Johnson and Sheppard, but both restarted tail. Up front, LaRock and Cartwright held strong, remaining one-two through the first handful of laps.

While LaRock tried to run away and hide, Cartwright was under fire from Rudolph and Johnson. A yellow on lap ten erased LaRock’s lead, letting Cartwright, Rudolph, and Johnson close in. Remember Sheppard, restarting last on lap three? A lap 12 power move around Cartwright and Johnson moved him to third, nine laps after pitting.

Under Rudolph and to second went Sheppard on lap 13, then hunting after LaRock for the lead. After a few laps of mulling over what lane to make the pass, Sheppard took command with 16 circuits complete. Once out front, Sheppard turned on the afterburners and drove away. A yellow on lap 20 canceled the gap, but Sheppard motored away again.

One final caution with three laps left deleted a 4–second advantage held by Sheppard, but like before, Sheppard wasn’t ready to be challenged. A flawless set of final laps saw Sheppard take the checkered flag first for his third win in a row at Outlaw, with Johnson, Rudolph, LaRock, and Steve Paine completing the top five.

“I think Kyle Coffey lost power and was trying to get in the infield, but I was there,” Sheppard noted of the contact that required a pit stop. “It cut our tire down, but we had time to get a new one on. It feels good, I say it every week here it seems like, but I’m fortunate to have a really good race car and a ton of good people behind me.”

Over the past few years, Tommy Collins Jr. has been a constant threat in both the American Racer Tire as well as the Hoosier Tire shod Crate Sportsman Divisions.  Thus far in 2020 at Outlaw Speedway Collins has focused his attention strictly on the Hoosier Tire class and it has paid off as he started in spot seven on the opening green flag  and after a spirited battle with then race leader, Stacy Jackson was able to take over the top spot by the mid-way portion of the twenty-five lap feature and from there went on the win his second consecutive feature in a row.  Earlier season Hoosier Tire Sportsman feature winner, Zach Sobotka was again a picture of consistency as he started twelfth and came home for second at the double checkers. Third thru fifth went to a trio of drivers that compete in both the Hoosier Tire and American Racer Tire Divisions as Alex Payne finished third as he was chased across the line by Zach George and last years Hoosier Tire Track Champion,  Will Shields.  Stacy Jackson, who was originally scored third at the finish had his run wiped out as his machine was DQ’d in a post feature event inspection.

Hoosier Tire Sportsman heat wins were claimed by Alex Payne and Tommy Paine who picked up his first checkered flag in his rookie season.

In the Sunrise Insulation American Racer Tire Sportsman Class, a solid field of twenty machines took the opening green flag.  Thus far it has been three different faces in three feature races in the popular Sportsman Division and this night would be no different.  Add third generation pilot and young gun, Alex Payne’s name to an already top-notch list of feature winners including Ajay Potrzebowski, Dale Welty and Zach Sobotka.  Payne started on the pole, led throughout the entire event, was able to withstand several restarts and came home with his first ever feature win at Outlaw.  Payne, who continues to hone his craft by competing weekly in both Sportsman Divisions at the track had all his and his crew’s hard work pay off as the extra seat time has certainly played a part him excelling to the top of his division.  Two additional household names that also compete in both the Hoosier Tire and American Racer Tire Sportsman Divisions including Will Shields and Zach Sobotka chased Payne across the finish line as they finished second and third.  Another pair of second-generation drivers in Billy Paine and Donnie Lawson rounded out the top five finishes.

Jeremy Bunn made it three straight feature wins in a row and has staked an early season claim to the 2020, 4 Cylinder Track Title as he was again victorious in the twenty-lap feature event.  Bunn’s ultra- sleek machine has proven to be the car to beat thus far as he cruised to another popular win.  Father, Scott Lehman once again has the family bragging rights as he bested son Scott Lehman Jr. for the runner up spot at the finish as opening night feature winner, Robert Doolittle came home for fourth.  Robert Decker started the event in the seventh row, put on the drive of the night and rounded out the top five finishers in the sixteen-car feature event.

2018 Outlaw Speedway IMCA Modified Track Champion, Rodney Morgan was dethroned last season by Brandon Smith who claimed his first ever track title after years of competing in the division.  With Smith going into semi-retirement this year it left the door wide open for a new track champion and Morgan has stake his claim by once again putting on a dominating performance in winning his fourth straight twenty lap IMCA Modified feature event and with the win remains undefeated on the season.  Veteran driver, Dick in the Dirt Rich Karlnoski rode home for second at the double checkered flags followed by lady driver, Nichole Spaulding who rounded the top three podium finishers.  For Spaulding she again showed great poise in running against her male counter parts as she continues to turn heads in the division.  Rick Watt and ageless veteran, Carl Sparky Hills completed the top five.

The lone IMCA Modified heat was claimed by Kevin Smith.

In the companion IMCA Hobby Stock Division it was once again Wayne Ellison finding victory lane in the thirteen-car field.  After a last place finish the week prior due to mechanical problems, Ellison came storming back this week.  Starting eighth on the grid, Ellison mowed the field apart and claimed his third win in four weeks of action as not only his machine attractive, it runs as good as it looks.  Bruce Kinner had to settle for second at the end as he was chased across the line by other class regulars in Jamie Eldredge Jr., class rookie, Joshua Oles with lady competitor, Amber Pierce bettering her sister, Allison by one spot to claim fifth.

In the Stan’s No Tubes Street Stock Division a season high sixteen classy looking machines took to the speedway for their twenty lap A main event.  Like the American Racer Tire Sportsman Division before them, the Stan’s No Tubes Street Stocks also have no one driver dominating the feature action.  Thus far in 2020 Quinn Sutherland, CJ Guererri and Glen Whritenour have enjoyed victory lane and on this night it would be a fourth new face hitting pay dirt as third generation driver, Jake Karlnoski was finally able to put all the pieces of the puzzle together in bagging his first win of the year and with it matched his lone win of 2019 in the tough class.  Jared Hill and Jake Karlnoski brought the field to the opening green flag and Karlnoski took full advantage of his up front starting spot, stayed in clean air throughout the event and came home with the win as he was followed across the line by last weeks winner and 2017 and 2018 class champion, Glen Whritenour.  Mike Wonderling, making a rare appearance in the Skyler Family Racing 57j, normally piloted by Sutherland started ninth on the opening green flag and put on a great drive to finish third.  CJ Guererri was again a picture of consistency as he rode home for fourth at the finish chased across the line by Jared Hill who rounded the top five.

In the Winner’s Circle Deli Bandit Division, it was Ethan Decker again finding victory lane as he continues to dominate the youth class.

Up next at Outlaw Speedway on Friday, July 3 tentative plans call for a Regular Super 7 Show as well as the Annual Fireworks Extravaganza.  However, due to recent developments in what was thought to be a re-opening of the facility to race fans it appears like NYS Governor Andrew Cuomo is now pushing that date back to later in the month.  Should the facility NOT be allowed to open the grandstand area, the fireworks program will be set for a later date.

Pit gates for the July 3 program will open at 5:30 with hot laps at 6:30. The first green flag of the night waves at 7:30 pm.  In the event no fans will be allowed in you can always tune in on the Dirt Track Digest TV.  All necessary details can be found on the tracks Facebook account by going to www.Facebook.com/OutlawSpeedwayLLC/. 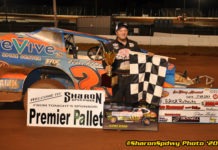