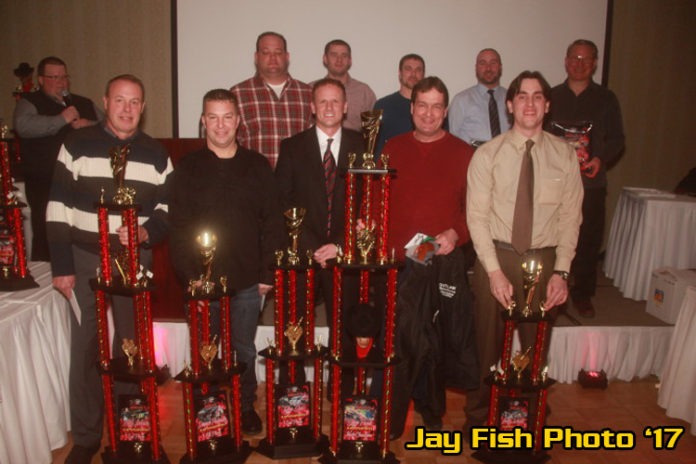 The Outlaw Speedway Racing Family got together at the Harbor Hotel in Watkins Glen, NY to celebrate a very successful inaugural season under the ownership of Tyler Siri. The annual awards banquet was a sold out affair with 300 racers, team members, and fans gathering for the final event of the 2016 racing season, recognizing the accomplishments of the track’s top performers from the track’s first season under the ownership and promotion of Tyler Siri.

After a very nicely done Cocktail Hour and a delicious dinner served by the hotel staff, it was time to get down to business handing out some hardware as well as a serious point fund. In the Friendly Dodge and Ford Modified division, it was “The Hurricane” Steve Paine picking up his ninth career track championship at the Dundee, NY oval. For his championship, Paine collected $5,000 in point fund money along with an “Outlaw Skull” custom designed trophy, and a championship jacket provided by American Racer and Insinger Performance.

Finishing behind Paine in the final point rundown was the driver of the Friendly Ford #14J Alan Johnson. The Friendly Auto Group has recently signed on as a multi-year sponsor at Outlaw Speedway and will be providing both the safety and pace vehicles in 2017. Speedway owner Tyler Siri collected the third place in points trophy while veteran Derrick Podsiablo finished forth in points with Justin Wright finishing fifth.

Sixth through tenth in points were awarded plaques with Brady Fultz finishing sixth in points with Corey Costa seventh in the final rundown. Costa’s on and off track demeanor earned him the Modified Sportsmanship award as well. Ron Cartwright Jr., Donnie Lawson, and Gary Tomkins completed the top ten in points. Jordan Siri finished 12th in points and was recognized as the Rookie of the Year in the Modified division.

In the 602 Crate Sportsman division, it was Chris Fisher making a late surge over the last month of the season to earn the 2016 track championship and the coveted Outlaw Skull trophy, championship jacket, and $1,000 cash. Despite only a single feature win, Fisher was able to secure the championship by 62 points over runner-up finisher AJ Lloyd. The third place trophy went to Bob Buono while Tom Collins Jr. finished fourth in the final point rundown. Collins was also awarded the Sportsmanship award in the division. Veteran Dale Welty drove to fifth in the final point standings.


Loren Lincoln picked up the plaque for finishing sixth in the final standings over Stacy Jackson and Brent Ayers. Mike Jackson and Mike Buchannon were ninth and tenth respectively. Todd Hayward finished eleventh in points and was awarded Rookie of the Year honors.

The top ten drivers in Sportsman points were entered into a drawing for a new Higfab Chassis, donated by Jerry Higbie of HigFab Chassis, Stacy Jackson was the lucky winner of the brand new chassis.

Scott Sebring parlayed a pair of strong late season runs into a sixth place in points plaque while Sparky Hills finished seventh in points and also received the Sportsmanship award. Jeff Austin finished eighth in points to earn the 2016 Rookie of the Year award while Tony Harris finished ninth in points. Rodney Morgan completed the top ten in points.

In the Crate Late Model division, Jason Knowles came out on top of a battle with his brother Brain to earn the Outlaw Skull trophy. Brian finished second in points and also picked up the Sportsmanship award. Bob Buono finished third with Adam Dupuy fourth and John Waters fifth.

In the Creekside Entertainment Street Stock division, it was veteran Chuck Winslow taking home the Outlaw Skull trophy, $1,000 cash prize and championship jacket after a very strong season. Finishing second behind Winslow in the final point standings was CJ Guererri, who also claimed the Street Stock division Sportsmanship Award. Jared Hill finished a strong third in points despite a trying season both on and off the track while Nate Daggett finished fourth in the final standings. Laverne Knickerbocker claimed the final trophy for the top five in points.

Sixth in the final rundown was JJ Kreidler with Carl Cleveland finishing seventh in points. Rookie of the Year Jason Smart finished the season eighth in points with veterans Quinn Southerland and Gene Balmer ninth and tenth respectively.

Austin LaBar picked up the Championship in the Winner’s Circle Deli Bandits division for the younger drivers to claim his first Outlaw Skull trophy. Steven Perkins III finished second in points and was recognized with the Sportsmanship Award. Joey Clark finished third with the divisions’ most prolific winner Jordan Bacon fourth in points despite getting a late start to the season. Matt Irwin finished fifth in the final rundown.

Siri also made several announcements as to the upcoming season. He reports fielding many calls from race teams planning to compete at Outlaw Speedway in 2016 with some high profile race teams looking to call Outlaw Speedway their Friday night home. Car counts are expected to increase in all divisions, but particularly in the Crate Late Models as other area tracks have made changes to their programs and several new faces are expected to join the weekly field. Siri also reported that the track has finalized their beer license for the 2017 season and the new “Outlaw Saloon” will be open for business in the first turn in 2016. Several special events are also on the schedule including the first ever visit of the Super DIRTcar Big Block Modifieds on June 20th and the All Star Circuit of Champions on July 26th. 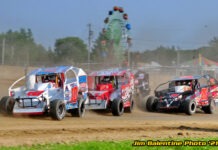