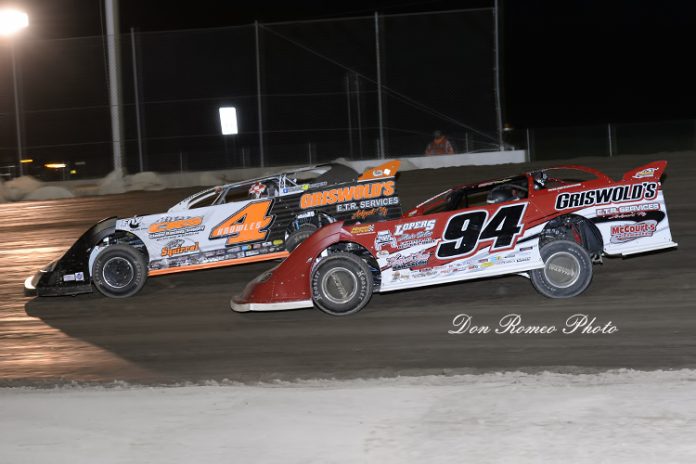 DUNDEE, NY – The Sweeney Chevrolet Buick GMC RUSH Dirt Late Model Touring Series powered by Pace Performance continued its northern swing on Friday night as Outlaw Speedway played host to the Series’ first ever visit for race #4 of the 2017 season. Friday night was the inaugural “Gary Montgomery Memorial”. Montgomery passed away in November 2016. Montgomery’s passion was his lifelong involvement in stock car racing. From spectator, driver, columnist, local track announcer to NASCAR radio and DIRT television commentator and track promoter, he participated in every aspect of the sport, resulting in lifelong friendships, within the auto racing community. Montgomery most recently promoted the BRP 360 Late Model Series, which has turned into a great stepping stone for many of the top New York RUSH Late Model racers today.

And it was only fitting that Montgomery’s best former racers went at it hard in the 30-lap feature. After a heartbreaking end for early leader Jason Knowles, Series standouts Bryce Davis, Jeremy Wonderling, and Wayne Robertson put on a show fans won’t soon forget. The trio battled three-wide for the lead with Davis and Wonderling trading slide jobs lap after lap, but Davis would get the last one in and pulled away in the final laps for his first win of 2017. Davis’ victory was worth $2,000 plus was selected as the Maxima Racing Oil “Maximum Performance” award winner.

“I haven’t gotten chills like this from a race in a long time,” revealed the 26-year-old Hornell, NY driver. “I can’t thank Jeremy (Wonderling) for running me clean like that. We ran a hell of a race. I’m speechless right now…that was awesome! I think that was the most risky race I’ve run in my lifetime. The bottom of three and four was the only place the track wasn’t glazed over so I could get in there and get the right rear to stick pretty hard and get the drive off. That’s what won us the race. My dad puts a ton of time into this race car. I have to thank my sponsors, everyone that helps me, my mom, brother, sister, and my wife and kids for allowing me to do this. This is just a huge team effort.”

Davis earned the feature pole via the K&N Dash victory, but it was Knowles powering into the lead using the topside of the track to nose ahead of Davis to lead the opening lap. After falling out of the top five, Series defending champion, John Waters, worked his way back to fourth on lap two behind Wonderling. On lap four, Davis got sideways exiting turn four allowing Knowles to pull away.


Knowles continued to lead as he caught lapped traffic on lap eight with a half-straightaway lead; meanwhile, Wonderling began to challenge Davis for the runner-up spot on lap 10. Knowles’ excellent run and bid at his first career Sweeney Tour win ended when he got too high on the backstretch in lapped traffic on lap 13 slamming the wall and ending up over the track in turn three. Knowles was awarded the TBM Brakes “Tough Brake of the Night”.

Davis assumed the lead over Wonderling and Waters when racing resumed. Waters looked like he may have a shot at his first win of the season as he got by Wonderling for second on the restart, but one lap later Wonderling regained the position. Debris brought out the second caution of the event- this time with 17 laps scored.

Back under green, Wonderling threw a slide job to take the lead on lap 18, but Davis gave one back to lead lap 19. Wonderling returned the favor with one in turns one and two on lap 20 to regain the lead. The two raced side-by-side between laps 17 through 22 before Jason Genco got turned out in turn one to bring out the final caution.

The winning move for Davis came on lap 24. Davis dove low in turns three and four and slid Wonderling. Wonderling got off the gas and tried to drive back under Davis, but this time Robertson was underneath. Wonderling squeezed between as it was three-wide racing down the frontstretch for the lead. Davis nosed ahead at the line over Wonderling and Robertson.

That would prove to be the winning move as Wonderling wouldn’t get any closer. Davis slowly stretched his lead over the final five laps to win by 2.585 seconds in the Dave Davis-owned, Griswolds E.T.R. Services/ Close Racing Supply/Jody’s Hair Design/GRT Racecars-sponsored #94. The victory was Davis’ eighth of his career in Sweeney Tour action moving him into sole possession of second place on the all-time win list.

Wonderling followed up his season opening Sweeney Tour win at Stateline on May 20 with a fine runner-up to earn $1,000. “That was a lot of fun,” expressed the 37-year-old Wellsville, NY driver. “I’ve raced with Bryce forever. I knew I could trust him. I actually thought I screwed him up because I dove on the bottom and pushed. I figured I was going to take him out and screw us both up, but he turned and drove back underneath me so I figured well…we might as well keep this going! It was definitely a lot of fun, but it was nerve-wracking at the same time especially when I was running on the outside of Bryce. I was coming down the frontstretch and was trying to leave Bryce room, but also trying to leave enough room between me and the wall. There were a couple times I didn’t think there was enough room.”

Robertson made his first Sweeney Tour start of the season a successful one in third. Kurt Stebbins had an impressive first ever Sweeney Tour start to finish fourth after starting seventh. Brian Knowles, who won the Sweeney Weekly Series opener at Outlaw, came from 12th to complete the top five. Rounding out the top 10 were Andy Boozel, Sean Beardsley, Steve LeBarron, T.J. Downs, and Andy Michael.

Beardsley earned the $100 Precise Racing Products “Pedal Down” Hard Charger gift card. In his first ever Sweeney Tour start, Beardsley raced from 17th to a seventh place finish. “Futures Cup” racer, Kyle Murray, was 14th and the final car on the lead lap to receive a $25 CrateInsider.com gift certificate.

Mesler laid down an impressive 15.543 lap for his first ever FK Rod Ends “Shock the Clock” Qualifying top honors for $100. Mesler then went out and won FK Rod Ends heat 1 for an additional $25. Waters and Wonderling added $25 FK Rod Ends heat race wins. Davis won his first K&N “Cold Air Induction” Dash of the season for a $100 K&N certificate. Jason Knowles was second for a $50 K&N certificate. Wonderling and Waters received an additional $25 cash for finishing third and fourth in the dash.

The Sweeney Tour will be in action on Saturday night (June 3) at Genesee Speedway for the first ever appearance at the Batavia, New York facility in a $2,000 to-win event. Pits open at 3 p.m. with warm-ups at 5:30 followed by $100 FK Rod Ends “Shock the Clock Qualifying”.