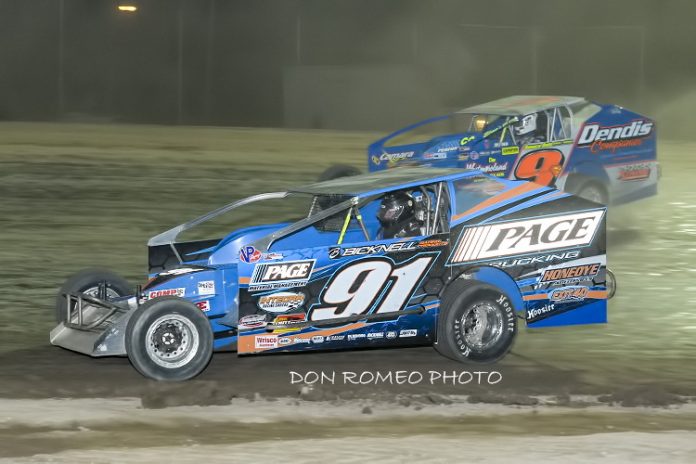 DUNDEE, NY – Billy Decker used the outside lane to take the lead from Larry Wight on a lap 68 restart and then fended off numerous challenges from reigning Super DIRTcar Series champion Matt Sheppard over the final 20 laps to win the Ultimate Outlaw 100 at Outlaw Speedway on Tuesday night.

Decker was strong in lapped traffic and had to utilize both the inside and outside lanes over the final 15 laps to get his second victory of the season in the Series’ first visit to the Dundee, NY track since 1990 when it was known as Black Rock Speedway.

“This Paige Trucking car was really good,” Decker said in Victory Lane. “MPR racing works really hard on this thing and gave me a rocketship tonight. We were pretty good putting in some time and then had a really good restart with Larry (Wight). He left me a lane and I got to the lead.”

Max McLaughlin and Stewart Friesen brought the field to the green flag from the front row for the 100-lap affair. Jimmy Phelps and Justin Haers had extra motivation to earn the win as the eligible drivers for the Dig Safely New York Call 811 redraw bonus if either could win from their redraw starting positions of 8th and 11th, respectively.


McLaughlin led the opening lap, but Friesen quickly replied by taking over the point in the outside lane. Behind the two front-runners, fifth-starting Wight quickly nosed under McLaughlin, which led to a three-wide battle for second with Matt Sheppard and Keith Flach.

The first caution came on lap seven for a slowed Marcus Dinkins. When the race resumed on lap 13, Wight challenged Friesen for the lead with momentum in the outside lane and completed the pass on lap 16. At lap 20, Sheppard took second from Friesen on the bottom groove as the field used every inch of a fast and racey track.

Wight’s lead of approximately five car lengths was erased on lap 27 when Peter Britten and Tyler Siri tangled in turn four. The incident ended the night for Siri, who doubles as the Outlaw Speedway owner and promoter.

On the ensuing restart, Wight and Sheppard both showed their hand for the remainder of the race, with Wight taking to the top groove while Sheppard glued himself to the bottom. Decker made his presence felt on lap 35 when he took third from Friesen after methodically making his way forward from the sixth starting spot.

Just before the halfway point, Sheppard fell to fifth when he spun and did a complete 360 after he and Wight made contact in turn two while battling for the lead. Sheppard gathered the car back up to speed and the race stayed green.

“I think we had the car to win,” Sheppard said candidly following the race. “We got up to second and were working Larry over. He kind of lost it up on the top of one and two and drove back across the track, drove over my front end and spun me out. I was able to keep it going and get going again”

Sheppard’s turnaround allowed Decker to take over the runner-up spot and pull within striking distance of Wight. Decker followed Sheppard’s previous line around the bottom while Wight continued to hit the top lane. Wight was resilient though, and navigated the lapped traffic well to maintain his advantage over Decker, but was never able to completely pull away.

Wight led until the caution waved again on lap 60 when Eldon Payne made contact with third-place Stewart Friesen in turn one, sending Friesen spinning in the middle of the track. Friesen eventually drove back to a 12th-place finish, but was denied what likely would have been a top-five finish. For his misfortune, Friesen claimed the Speedy First Air Hard Luck award.

On the following restart, Wight chose the inside lane and Decker promptly drove around the outside of the No.99L to take the lead when the green flag brought the field back to speed on lap 68.

“We had a really good car early, we just didn’t have enough of it leftover for the end,” Wight said. “I thought I was making the right decision taking the bottom and Billy was able to stay with me down the front stretch and get around me through one and two.”

A trio of attempts at a lap 75 restart allowed drivers to gather their thoughts before the final sprint. The single-file restart saw Decker out front while Sheppard took second from Wight by lap 78.

Then, in traffic, Decker used the high lane as well as the bottom to protect the lead while maneuvering past the slower traffic with Sheppard racing within a car length.

“When Matt wheeled underneath me a couple of times in one and two, I figured I better move,” Decker said. “I had to move around a little bit and try to find something a little bit better. I think we were fortunate with Steve Paine there. He was having a little trouble and I used him as a pick to get to the bottom and that gave me a little distance.”

Sheppard made several attempts to take the lead from Decker with a drive off the bottom of turn two, but a slower car racing in the bottom lane blocked his effort on more than one occasion.

“I thought we had something for Billy there at the end, but every time I went to pass him it seemed like we’d catch a lapped car,” Sheppard recounted. “Then I’d go to pass him again and we’d catch another lapped car. It pretty much went on like that until the end.”

Regardless, Decker was strong and strategic in holding off Sheppard for the victory, an important second triumph in just the Series fourth race this season. Wight claimed the third position while Alan Johnson, a weekly regular at Outlaw, and Erick Rudolph completed the top-five.

Pat Ward was the race’s KSE Hard Charger after racing from 19th to 9th following his Last Chance Qualifier victory earlier in the evening.

Before the event could even get started, full-time Series driver and rookie-of-the-year contender Michael Maresca found his night in shambles. On his first qualifying lap, the Potsdam, NY driver dug into turn three and flipped wildly end-over-end in his No.7m. The 22-year-old driver was uninjured, however his racecar was destroyed and he was unable to compete in the remainder of the event.

The Super DIRTcar Series returns to action on Tuesday, June 27 for Brett Hearn’s Big Show 9 at Albany-Saratoga Speedway. The $10,000-to-win event is one of the biggest on the tour this season and will attract the talented field of Super DIRTcar Series regular along with home track heroes. Advanced reserved and VIP tickets are available at www.thebigshow9.com.