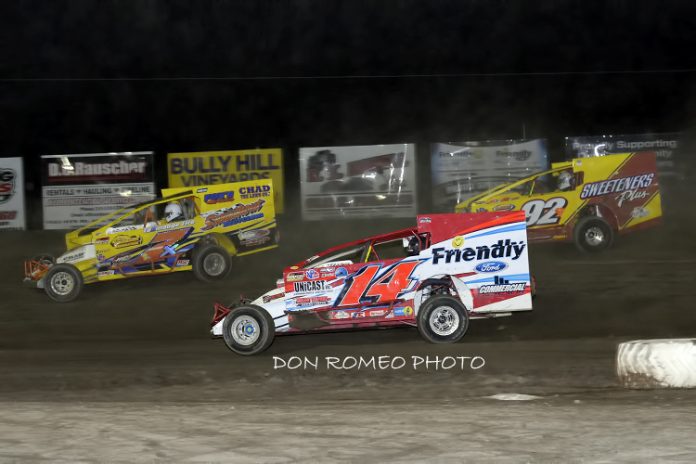 DUNDEE, NY – Knapp & Schlappi night at Outlaw Speedway was a busy one, with 1 on 1 Spectator Races and a heldover IMCA Modified feature from July 7th added to the usual Super 6 Show program.

Derrick Podsiadlo moved into the lead at the start of the 30-lap Friendly Dodge Outlaw Modified feature as Eldon Payne grabbed the runnerup spot. Alan Johnson, Steve Paine, and Matt Sheppard were battling furiously outside the top five with Johnson moving to fourth by lap 8 with Sheppard cracking the top five two laps later as the yellow flew for the Brian Swartout car losing a wheel on the backstretch. Payne took the lead on the restart, but Podsiadlo grabbed the lead back two laps later as Payne went over the cushion and dropped back to fifth. Steve Paine moved to second on a lap 14 restart and there was a tremendous battle among Posiadlo, Paine, Johnson, and Sheppard for the lead. Paine grabbed the lead with ten laps to go as Johnson slipped into second. Johnson closed in on Paine in the final laps, but Paine would not be denied, getting his second win of the year over Johnson, Sheppard, Podsiadlo, and Payne.

Rob Bussey started outside the front row in the 25-lap Crate Sportsman feature and was able to pull half a straightaway lead on Brett Ayers by halfway. Dale Welty spent a good number of laps battling Brett Buono and Chris Fisher for position in the top five as Ayers cruised in second behind the leader. With ten to go, a lapped car jammed up the battles behind leader Bussey and they fought hard for position, with Welty sweeping the outside to get second on lap 21. Ayers fought back and at the line, Bussey had his first win of the year in comanding fashion, with Welty beating Ayers to the line for second, followed by Ayers, Todd Heyward, and Chris Fisher.

Bussey’s car failed a post race inspection and he was disqualified.


Heat races were won by Rob Bussey and Brett Buono.

Friday’s Crate Late Model feature was part of the Double Down Series with Genesee Speedway, and Kurt Stebbins jumped into the early lead. The yellow flew for Kyle Murray’s stopped car on lap 5, which bunched the field. Jeremy Wonderling made some moves on the restart to grab second place and began to chase after Stebbins. JJ Mazur was also moving up in the field, battling Brian Knowles for third Wonderling slid under Stebbins on lap 15 to take the lead and notched the win over Stebbins, Mazur, Knowles, and Andy Michael.

The IMCA Modified division had two features on Friday night, with the first race held over after being curfewed out on July 7th. In the heldover feature, Jake Karlnoski grabbed the lead as the first yellow flew for Todd Stone’s spin on lap 6. A multi car spin on the restart involed Glenn Whritenour and several others, and on the next attempt to go green, Billy Ward took the lead while Rich Michael moved into second. The pair battled for the lead until Michael slid past Ward on lap 12 and cruised to the win over Billy Ward, Brad Smith, Rich Karlnoski, and Jake Karlnoski.

In the regularly scheduled IMCA Modified feature Jaek Karlnoski also held the early lead, but Bob Maynard moved around him one lap in while the rest of the pack battled two and three wide for position. Rich Michael, winner of the first feature, had slid off track on the opening lap, but found himself in sixth on a lap 5 restart. Michael passed Todd Stone for second and a lap later pulled the slide job on Maynard to take the lead. Maynard had problems and came to a stop on lap 11.

Stone spun a lap later, which shuffled Will Ward and Keith Lamphere into the top five. Ward and Lamphere fought for second as Michael held the lead. Michael held on through several late race starts to sweep the night over Lamphere, Will Ward, Glenn Whritenour, and Brad Smith.

Chuck Winslow took the lead from Carl Cleveland at the end of the first lap of the 20-lap Street Stock feature and quickly gapped out to a straightaway lead. As Cleveland and Buono battled for second, there was some great racing behind them with Jared Hill mixing it up with Glenn Whritenour, Kurt Stebbins, and Gene Balmer. Balmer and Quinn Sutherland hooked together and slid off turn 1 on lap 11, and it took several minutes to separate the machines. Sutherland was able to continue as the race restarted with Whritenour and Buono challenging Winslow for the lead. Winslow held off all comers and took the win over Whritenour, Buono, Stebbins, and Jared Hill.

Desi Force led the opening laps of the 20-lap 4 Cylinder feature with Scott Lehman moving into second on lap 2. Ray Hyer was on the move as well, taking the third spot on lap 3. Hyer began reeling in the top two as the yellow flew on lap 8 and was able to move into second on the next restart. Hyer made the move for the lead on lap 12 as Derrick Puryear, Chad Ayers, and Lehman battled for position further back. Lehman faded on a lap 14 restart as Hyer again pulled away, but the Billy Bowers car slowed on lap 18, setting up a two lap dash to the finish. Hyer easily pulled away again to take the checkered flag over Force, Puryear, Ayers, and Eric Bell, who came from the back of the field to take fifth.

4 Cylinder heats were won by Erica Bell and Desi Force.

In the 10-lap Marion Decker Agency/Farmers Insurance Hobby Stocks, Marc Minutolo took the lead from Dave Decker a couple of laps in and led the rest of the way for the win. Decker, Allison Pierce, and Buck Mills rounded out the field.

Next Friday night its Fire Fighter and EMT Night with a Super 6 show. In two weeks, on July 28th, Lane’s Yamaha presents the first ever visit of Tony Stewart’s Arctic Cat All Star 410 Sprint Series, which will feature Sammy Swindell and