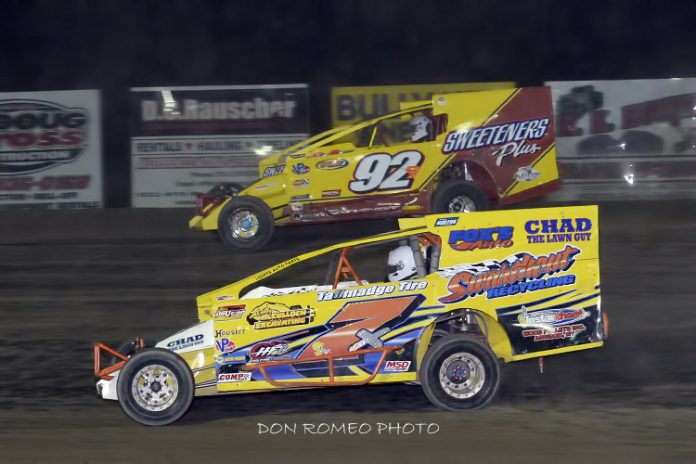 The 30-lap ASCoC ‘A’ Main began with Sammy Swindell grabbing the early lead over Ryan Smith as Danny Dietrich and Caleb Helms battled for third.  The leaders hit traffic on lap 4 and a wild battle for the lead ensued.  Smith was able to muscle his way by Swindell on lap 13 as Helms and Dietrich battled with Chad Kemenah.  Kemenah moved to fourth at halfway as Swindell retook the lead on lap 17.  Diettrich was on a charge and caught the leaders with ten to go but was passed by Kemenah on lap 21.  Smith slipped past Swindell again on lap 23 as the leaders continued to work traffic.  A spin in turn four on lap 28 by Max Stambaugh brought the field together for a restart with two laps to go.  Smith held on and took the win over Kemenah, who passed Swindell on the restart.  Danny Dietrich and Tony Stewart rounded out the top five.

Steve Paine grabbed the lead from his third starting spot in the opening lap of the 30-lap Friendly Dodge Outlaw Modifiedfeature and soon was followed by Alan Johnson, who motored into second.  Matt Sheppard quickly moved up from his 8th starting spot to third, and the trio pulled away from Cory Costa as the race reached halfway.  Sheppard grabbed the top spot from Johnson on the outside lane as Paine fell back from the lead duo.  In the closing laps, Johnson was able to draw in on Sheppard in lapped traffic, but Sheppard made the right moves at the right times to take another victory over Johnson and Paine.  Derrick Podsiadlo made a pass with two to go to take fourth from Costa.  The entire 30-lap distance was run without a caution flag.


Brett Buono jumped into the lead at the start of the 25-lap Crate Sportsman feature event as Jake Dgien battled with Nick Guererri for second spot.  Chris Fisher, Dale Welty, and Tommy Collins Jr were also running hard in the top five.  As the race progressed past halfway, Buono and Welty traded the lead back and forth a few times, while Collins got ahead of Guererri, then slipped under Welty to take second with five laps to go.  Dgien fell out of the top five when he nearly slid off the track in turns three and four.  A lap 22 yellow set the stage for a shootout to the finish, with Buono holding off the challengers for his first win of the season.  Collins Jr, Guererri, Welty, and Fisher followed Buono across the line.

Todd Stone led the first five laps of the 20-lap IMCA Modified feature until Glenn Whritenour passed him for the top spot. One lap later, Stone spun to bring out the first yellow flag of the event.  Brandon Smith battled Whritenour for the lead on the restart, with Keith Jack Lamphere and Richard Michael Jr. also in the mix as they fought for spots with Phil Yaw.  Smith took the lead from Whritenour on lap 10 as Michael slid into third.  Michael then moved into second and made a classic slide job pass on leader Smith on lap 17.  Smith was passed by Lamphere and Chris Fleming late in the race, but they could not catch Smith in the final laps as he took the win.  Lamphere, Fleming, Smith, and Whritenour rounded out the top five.

IMCA Modified heats were won by Will Ward and Brandon Smith.

In the 20-lap Street Stock feature, Glenn Whritenour came out of a three wide battle with Chuck Winslow and Bob Buono for the lead.  Buono faded into a battle for third with CJ Guererri and Gene Balmer, but spun on lap 8.  On the restart, Winslow retook the lead from Whritenour as Quinn Sutherland got the runnerup position.  Sutherland chased Winslow the rest of the way, but could not catch him as Winslow grabbed another win.  Sutherland, Whritenour, Guererri, and Jared Hill rounded out the top five.

In the 20-lap 4 Cylinder feature, James Kreidler and Billy Bowers battled for the lead over the first few laps and were soon joined by Ray Hyer, who made it into third by lap 5.  The trio diced three wide for the top spot as Kriedler maintained the top spot, but contact between Bowers and Kreidler allowed Hyer to slip to the bottom in turn 4 on lap 9 to take the lead. Hyer cruised home for another win.

4 Cylinder heats were won by Billy Bowers and Ray Hyer.