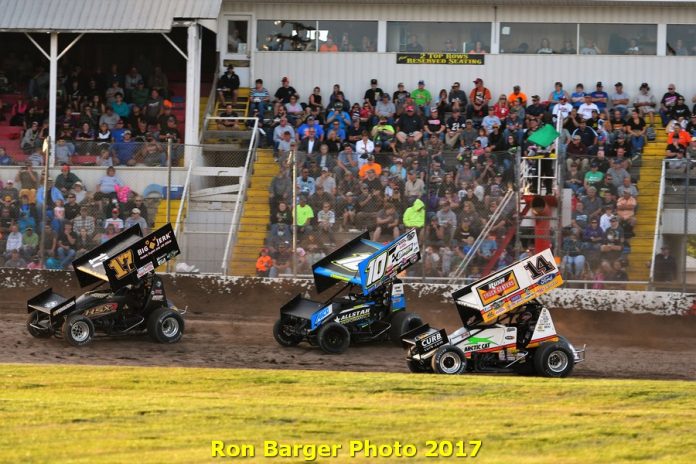 July 28th, 2017 was a date that was some eight months in the making…Tony Stewart’s Artic Cat All Star Circuit of Champions was coming to the Outlaw Speedway in little Dundee, NY. The 4/10ths or so mile dirt track oval that businessman and big block modified chauffeur Tyler Siri bought in the winter of 2016.

Siri has transformed an oval that was starting to show it’s age and it’s popularity dwindling. He’s dumped thousands and thousands of dollars back into the facility. The improvements has even heard people call the track a showcase piece of dirt track racing. Strong words indeed.

While the improvements and dedication gave the track almost instant notoriety which showed in attendance numbers last season in April/May. However as the season went on circumstances and well you can say, inexperience showed.

The biggest issue of 2016 was programs that lasted into the wee hours of the morning. Whether it was weather related, track conditions or just plain long nights. Oh and this writer was there for the infamous 3am event in May doing my other duties. Siri had to even appear in front of town dignitaries in the winter months to address the noise lasting well, quite frankly too long into the night.


While there were these circumstances to be addressed, he continued to press on and get his rookie year as a promoter under the books. Siri addressed what was needed and moved forward to the new year. One main complaint was of the track conditions and the tired surface that he inherited so he dumped truck load upon truck load of new clay in the off-season. This of course brought on a new challenge for the now 2017 season, rough track conditions.

As each show moved on during the year, his ample equipment was put to use each night with time is of the essence as well. Siri though never lost his focus and drive to make Outlaw better each week. So, we moved the clock forward to July 28th and it’s time Tyler and gang to shine.

A big crowd is expected, Tony Stewart is coming, Sammy Swindell is coming not to mention the second largest sprint car organization in the Nation.

“We have been getting ready for this race for a long time now, I have been here (the speedway) to about one in the morning each night (during the week.),” Siri told of his preparations, “The fans love the sprint cars here, with Tony and the All-Stars coming we knew the crowd would probably be big.”

Tyler worked with the same town officials to secure some more parking off the speedway property. He beefed up staff for concessions and had a contingency plan of every seat was filled on the front stretch side. Since I saw the place back in May, it had even a sharper look with new paint and just some good old fashioned elbow grease.

“We wanted to make sure we were ready for all the curve balls that might be thrown at us,” he went on, “We just would like to have everyone have a good time. We felt there were going to be a few that made their first ever trip to Outlaw and we want them to come back.”

Well to make a long story short, Tyler Siri had to use the extra parking, Tyler Siri put the extra staff to work and Tyler Siri filled every single seat available and had to move folks to the pit area. Welcome to the largest crowd EVER in Outlaw, Dundee, Yates County and Black Rock Speedway history.

While Outlaw still ran all their five classes, they have now gotten that down to a good science. “I still get some flak on running my other classes but they are important to Outlaw and the back bone,” He went on with his plan, “We have put a bunch of special shows on the schedule but I just can’t say you’re not running on this night or that night. They deserve to race.

“I think we have a good plan now, we run all the heats and consis if needed first. We have the track prep down pretty good at intermission and only takes 20 minutes or so,” he continued, “Then we will run the traveling class first, then our mods and on from there. Our goal is to have the traveling class done by 9:30/10 O’clock.”

I can attest that his plan as indeed working. Our (Empire Super Sprints) A-Main back in May was done just past 10 and was welcomed by the teams. When Scott Hixson waved the double checkered flag over Ryan Smith, it was 10:13.

It was indeed a night to remember, the energy in the place was well for a lack of a better term, cool. Fans cheered loudly for Tony and Sammy. When Ryan did his wing dance another roar went up from the crowd. Folks were just plain having a good time!

And how could they not? They saw a sprint car A-Main where cars were side by side for all 30 laps with four drivers vying for the win, the big blocks went non-stop for 30 laps with Superman Sheppard coming from eighth to win and the sportsman… Oh the sportsman. Hows a five car battle for the win?!?!

The morning after Tyler was reflecting with a phone call, “What did you think of that buddy!” He said with proud enthusiasm, “How did we do?” I had simple answer…great job man.

“There was a bunch of pressure but I just wanted to make sure everything was the best we could have done. I talked to Tony a bunch as well as he is now big into promoting his track,” Tyler went on with still excitement in his voice, “He even gave me a compliment at the end of the night. We probably talked for about 40 minutes after the show and to hear it from him means alot.”

It’s been a long and expensive nearly two years or so for Tyler and crew but the old adage is hard work pays off. On this beautiful night in July, the hard work paid off.