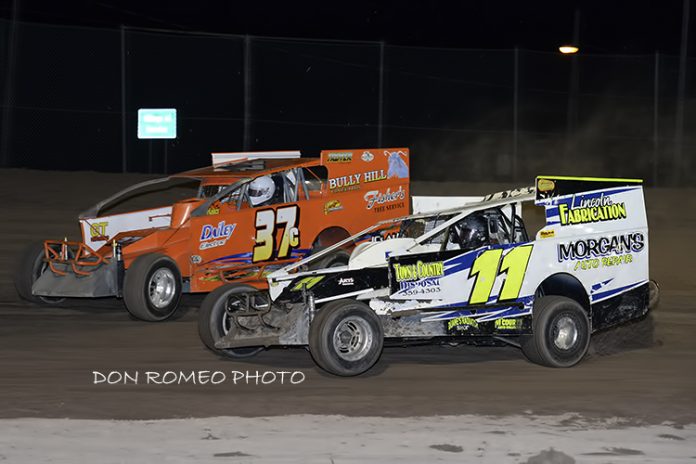 Eric Fisher outdragged Donnie Lawson for the lead at the start of the 30-lap Friendly Dodge Outlaw Modified feature.  A quick yellow for Dillon Groover’s car on lap 4 brought about a restart that saw Matt Sheppard moved into the top five behind Cory Costa.  Contact between Justin Wright and Alan Johnson on lap 8 sent Johnson to the pits, who was only a couple of points ahead of Steve Paine in the battle for second in the season standings.  Lawson dropped out on lap 11, putting Sheppard to third behind Eldon Payne.  Fisher continued to lead as Sheppard and Payne battled, with Steve Paine closing in from fourth.  Paine passed Sheppard on lap 19 as the pair fought it out with Payne while Fisher cruised to a straightaway lead.  At the checkers, Fisher had his first win of 2017 over Eldon Payne, Steve Paine, Matt Sheppard, and Brady Fultz.

Sheppard locked up the 2017 track championship for the Friendly Dodge Outlaw Modifieds.

After a pair of incidents on the original start attempts to the 25-lap Crate Sportsman feature, the race got underway with Chris Fisher taking the lead from Todd Hayward and Doug Smith.  Tom Collins found the outside groove to his liking and charged through the field to fourth by lap 8.  Point leader Karl Comfort also moved into the top five and battled for position with Brett Buono in the race’s middle stages.  Collins made it to second and with four to go was pressuring Fisher for the lead.  Collins battled hard but could not slip past Fisher in traffic as Fisher took the win, followed by Collins, Fish, Hayward, and Brett Buono.  Karl Comfort finished behind Buono, which was enough for him to garner the track championship.

Jason Knowles took off from the front row of the 20-lap Crate Late Model feature and build up a lead and Chris Fleming and Bryce David battled for second, with Davis taking the spot on lap 7.

The Crate Late Model heat was won by Chris Fleming.

In the 20-lap IMCA Modified feature, Jake Karlnoski jumped out to the lead with Brandon Smith and Todd Stone trailing.  Smith and Stone battled for second as Phil Yaw and Shawn Bruce moved into the top five.  Stone spun on lap 14 to bring out the yellow and bunch the field.  Karlnoski pulled away on the restart and Yaw slid under Smith for second on lap 18 as Karlnoski came home with a flag-to-flag feature win, followed by Yaw, Glen Whritenour, Rich Karlnoski, and Tyler Stoddard.

James Kreidler III grabbed the lead from CJ Guererri at the start of the 20-lap Street Stock feature.  They pulled a full straightaway ahead of the field as Dave Matwiejow moved ahead of Kurt Stebbins into third.  Point leader Jared Hill came to a stop on lap 8 to bring out the first caution of the race.  Stebbins also pitted under the yellow.  Guererri grabbed the lead on the restart with Quinn Sutherland jumping from fourth to second.  Guererri and Sutherland battled for the lead until Matwiejow spun out of third with five laps to go.  Guererri held off repeated challenges from Sutherland in the finals laps to claim his first win of 2017.  Following Sutherland in second was Buono, Glen Whritenour, and Kriedler.  Whritenour’s fourth place finish allowed him to leapfrog Hill to take the championship.

In the 20-lap 4 Cylinder feature event, Chad Ayers came through an opening lap scramble to take the lead with point leader Mike Stone in the runnerup spot.  Billy Bowers got the lead on a lap 4 restart as Ayers and Stone battled with James Kreidler III for second.  Erica Bell, second in points, had a spin on lap 5 but charged back into the top ten by the halfway point.  Kreidler grabbed second on a lap 9 restart and chased after Bowers, but Bowers maintained his advantage until Bell’s motor blew on lap 18 to set up a two lap dash to the finish.  Bowers held on for the win over Kridler, Ayers, Stone, and Bruce

The Farmers Insurace/Marion Decker Agency Hobby Stock feature saw Aaron Miller lead the first two laps until Marc Minutolo grabbed the lead.  Dave Decker made his way past Miller at the halfway point but could not catch Minutolo, who took the win as Decker clinched the track championship with a second place finish.  Milller, Jamie Eldridge, and Jeremy Trank rounded out the top five.

In the Winner’s Circle Deli Bandit division feature, Cole Youse led flag to flag to capture the win and seal up the championship in the class.  Austin LaBar, Jarrad Waekfield, and Steven Perkins III followed Youse across the line.  Outlaw Speedway returns to racing action with the Fall Nationals weekend on Friday, September 22nd and Saturday,