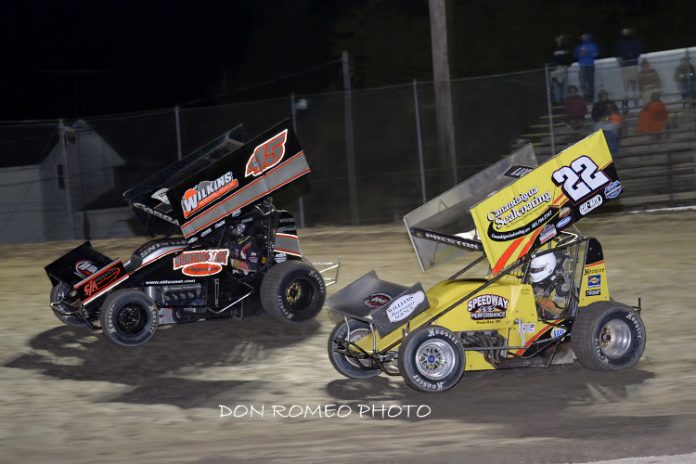 The 30-lap Patriot/URC/ESS A-Main saw Johnathan Preston grab the lead with Chuck Hebing jumping past Scott Kruetter to take second spot.  A lap 10 caution for a crash involving George Suprick restacked the field, then a flip by Paulie Colagiovanni and Steve Collins brought out the red flag.  Hebing got back to the point on the restart with Kruetter going to second as Joe Trenca moved to fourth.  Trenca moved past Kruetter  into second as a spin on lap 23 again bunched the field.  Kruetter lost a right front tire on the restart, and the red flew for a fuel stop.  Jason Schultz and Josh Weller jumped into the top five on the restart, but Hebing was not to be denied, taking his second straight Fall Nationals win over Trenca, Thomas, Schultz, and Preston, who snagged fifth from Weller on the final lap.

Ray Bliss outgunned Adam Leslie for the lead at the start of the 25-lap Hoosier Tire Crate Sportsman feature.  Dave Marcuccilli moved from his fifth starting spot to third by lap 8 and was putting pressure on the leaders.  In the middle stages of the race, Leslie continued to battle Bliss for the lead while Marcuccilli and Kyle Inman fought for position behind them.  Karl Comfort and Nick Guererri were on the move as well, closing in on the top five with seven laps to go.  Leslie used the low lane to take the lead from Bliss on lap 20, but after two restarts, Bliss was able to move back into the lead on the top lane on lap 23 and took the win over Leslie, Marcuccilli, Comfort, and Inman.


In the 25-lap Street Stock feature, Chuck Winslow grabbed the lead from Rich Green, with Kurt Stebbins moving into second on lap 2.  As Winslow and Stebbins battled, Gene Balmer moved into third ahead of Green with Teddy Moreseman and Lance Albanese battling for fourth and fifth.  The first yellow flew for Carl Cleveland’s car on lap 11.  Stebbins grabbed the top spot as Green slowed on lap 14, bringing out another yellow.  Stebbins and Winslow battled side by side for the lead as Albanese moved to third.  Stebbins finally emerged with the lead with two to go and took the win over Winslow, Albanese, Balmer, and Glen Whritenour.

The 20-lap Hobby Stock feature began with Marc Minutolo taking the lead with Buck Mills Jr moving to second.  A crash on lap 4 involving Jeremy Trank and others brought action to a halt as curfew time hit, sending racers back to the pits.  The remainder of their feature will be run during the Dutch Hoag weekend in October.

Due to curfew, the 4 Cylinder and TUSA Mod Lite features, along with the Gunslinger Dash for Modifieds, were held over to be run on the Saturday portion of the Fall Nationals program.

TUSA Mod Lite heats were won by Jeff May and Mike Mullen.