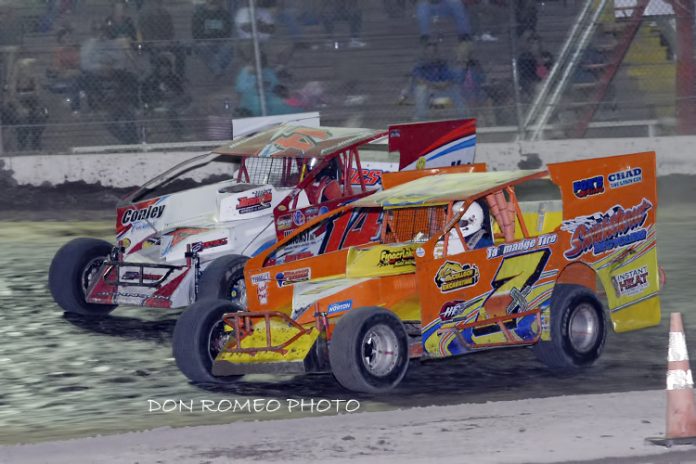 DUNDEE, NY – The second day of the Fall Nations at Outlaw Speedway again brought warm, sunny weather and a full pit area, headlined by the Friendly Dodge Outlaw Modifieds running the ‘Gunslinger 50’, part of the Insinger Performance/Sunoco Race Fuels series of events at the facility.

The 50-lap Friendly Dodge Outlaw Modified feature saw Alan Johnson and Steve Paine move to the front and battle for the lead in the opening laps as Andy Bachetti was coming up from his 13th starting spot into the top five.  As Johnson and Paine separated fro the field, Derrick Posiadlo and Tyler Siri fought for the third spot.  Bachetti and Kyle Coffey closed in on that battle as the leaders started working through lapped traffic.  Paine got by Johnson for the lead on a lap 35 restart and Bachetti moved past Siri for third.  Paine pulled away in the remaining laps to take the win over Johnson, Bachetti, Donnie Lawson,
and Tyler Siri, who crossed the line with a flat left rear tire.

Corey Cormier outdragged Dillon Zacharias for the lead at the start of the 25-lap American Racer Tire GRIT Crate Sportsman feature.  Dave Marcuccilli moved to second on lap 4 and battled Cormier for the lead, taking the top spot on lap 11.  Marcuccilli was able to fight his way through traffic in the middle stages of the race as Zacharias and Kenny Hammond closed in on Cormier in traffic to battle him for second spot.  Tom Collins Jr made a late race surge into the top five as Marcuccilli cruised to the win, followed by Cormier, Collins, Zacharias, and Hammond.


There was also an Open Sportsman Shootout event as part of the Fall Nationals.  Dave Marcuccilli shot into the lead at the start of the 20-lap event and gapped out on Tom Collins Jr and Billy Shantel.  Shantel fell into a battle with Kevin Jordan and Brian Fish as Marcuccilli was able to take his second win of the day.  Collins Jr, Shantel, Kevin Jordan, and Brian Fish rounded out the top five.

In the 20-lap Crate Late Model feature, Jeremy Wonderling shot out to the lead from the pole and Jason Knowles grabbed second on lap 3 and started chasing after the leader, but his race ended when he stopped in turn one on lap 5.  After a couple of restarts, Wondering and Bryce Davis traded slide jobs for the lead, with Davis emerging on top at halfway.  Davis was able to pull away in the second half of the race as Jason McGregor, Brian Knowles, TJ Downs, and John Waters waged a torrid battle for fifth.  At the finish, Davis took the win over Wonderling as Wayne Robertson spun out of third place on the final turn.  Brian Knowles, John Waters, and Alan Chapman completed the top five.

The 20-lap IMCA Modified Empire State Series feature began with Beau Ballard and Brad Smith racing side by side for the lead as the top six all ran tightly together.  As the top six shuffled the deck, Jake Maynard had trouble in turn four on lap 6, which brought out the first yellow.  Richard Michael Jr worked his way to second after the restart and passed leader Brad Sites for the top spot on lap 11.  Michael Jr held off Sites on some late race restarts to take the win, followed by Will Ward, Ken Buck, and Brad Smith.

In the 600c Micro Sprint feature, Garret Bard took the lead as Tyler Walker came from his 8th starting spot to second in the first two laps.  Bard and Walker distanced themselves from the field as MIckey Ciliberto moved into third.  Bard hit lapped traffic at the halfway point but maintained his advantage until Ivan Forrey’s car came to a stop with five laps to go, setting up a restart.  Bard jetted away at the front of the field as Walker fell back on the restart and took the win over Eric Wise, Matt Smith, Brandon Oddo, and Ciliberto.

The TUSA Mod Lites had two feature events, the first being the held over race from Friday night  Brandon Shaw held the early lead in the event, but the top five were all battling side by side with Jeff May, Nick Sapp, Mike Mullen, and Paul Kalger all in the mix for the lead.  Klager emerged with the top spot at halfway and he pulled away to a commanding win over Mullen, Shaw, Chris Robinson, and Sapp.

The regularly scheduled TUSA Mod Lite event saw Klager grab the lead on lap 2 and cruised to a comfortable win to sweep the day’s features for the class.  Nick Sapp, Jeff May, Keith Smith, and Brian Meyers rounded out the top five.

The 4 Cylinders also did double duty on the day, beginning with their held over feature from Friday night.  Ray Hyer jumped out to the early lead, but Brad Sheppard grabbed the top spot on a lap 5 restart.  Eric Boozer moved into second on lap 8 and challenged leader Sheppard during several mid race restarts.  Boozer captured the lead on a lap 11 restart and pulled away for the win over Sheppard, Chris Leone, Phil Desormeau, and Cody Baker.

In the regularly scheduled 4 Cylinder feature, Quinn Wallis led the first three laps until James Kreidler III took over the point.  Ray Hyer moved into second while Phil Desormeau and Dante Mancuso fought with Cody Baker and Brad Sheppard for third.  As Kreidler and Hyer fought for the lead at halfway, Baker and Sheppard moved past Desormeau, who broke down in turn four.  Kreidler’s race ended on lap 15 when he lost the right rear tire.  Baker, Hyerr, and Sheppard had a great battle to the finish, with Hyer taking the win over Baker, Sheppard, Eric Boozer, and Chris Woodard.

Outlaw Speedway finishes the season with the Dutch Hoag Memorial Triple 7 Weekend on October 20th and 21st.  For