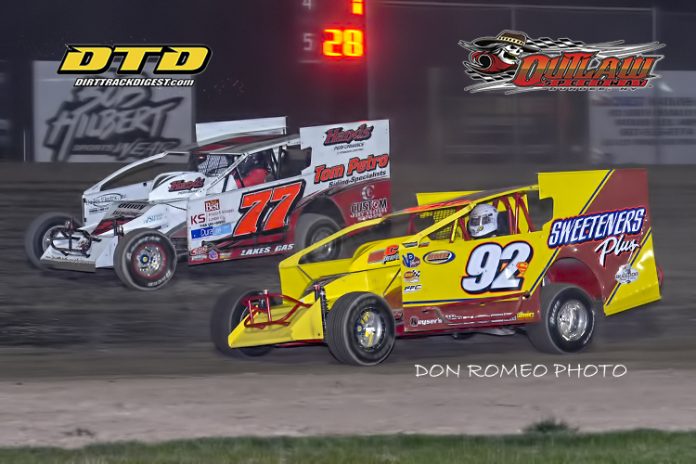 A redraw for starting positions found Matt Sheppard coming from the pole at the start of the 30-lap Friendly Dodge Chrysler Jeep Ram Outlaw Modified feature.  Sheppard and Alan Johnson took off from the pack in the early stages, as Eric Fisher ran unchallenged in third.  Eldon Payne and Steve Paine battled for fifth as the leaders hit lapped traffic.  As Sheppard and Johnson threaded the traffic, Paine used it to move past Payne to grab 4th.  A lap 22 yellow bunched the field for a restart, which saw Eldon Payne slide up into the foam blocks outside turn 1.  Sheppard again pulled away and grabbed his third win in three starts, followed by Johnson, Fisher, Paine, and Cory Costa.

The 25-lap Crate Sportsman feature saw Brian Fish take the early lead while Chris Fisher and Jimmy Zacharias battled for second.  Fish got into lapped traffic at the halfway point, but was able to pick his way through and maintain the lead.  As Fisher and Zacharias continued their battle, Chris Silvers and Karl Comfort battled hard with Tom Collins Jr.  Fish went wire to wire to claim the feature win, followed by Fisher, Zacharias, Silvers, and Collins.


The 20-lap Crate Late Model feature began with Jason Knowles and Chad Homan breaking away from the pack as Kurt Stebbins made a move into the top three, passing Brian Knowles and Kyle Murray.  Homan pulled a classic slide job on Knowles to take the lead after a restart and pulled away for the win.  A battle between the Knowles brothers saw Jason beat Brian for the runnerup spot, followed by Alan Chapman and Kurt Stebbins.

The Crate Late Model heat was won by Kurt Stebbins.

In the Marion Decker Agency IMCA Empire State Series 25-lap feature, Rodney Morgan got the lead after a battle with pole sitter Todd Stone.  There was a lot of battling behind Morgan as Brandon Smith moved into second and Will Ward charged past Phil Yaw for third.  Just past halfway, Smith and Ward moved into first and second and battle for the lead, with Ward making a strong pass coming to the white flag for the win in a caution-free contest.  Smith, Mogran, Cody Johnsons, and Brad Smith completed the top five.

Heats for the Marion Decker Agency IMCA Modifieds were won by Todd Stone and Will Ward.

The 20-lap Street Stock feature saw Carl Cleveland outdrag Gene Balmer for the lead.  Quinn Sutherland made some incredible moves to reach second, but Balmer battled him back.  Kurt Stebbins, Jared Hill, and Glenn Whritenour got into the mix as Cleveland pulled a full straightaway lead heading into traffic.  A lap 14 yellow saw Cleveland again pull away as HIll and Whritenour moved into second and third.  Cleveland held off a closing Hill for the win, followed by Whritenour, Balmer, and Stebbins.

In the 20-lap 4 Cylinder feature, Ray Hyer was the early leader as Adam Austin and Chris Woodard battled with Dan Smart for second.  Austin rocketed past Hyer for the lead on a restart as Woodard moved past Hyer.  The trio battled hard through the second half of the feature with Austin and Woodard running several laps side by side, then three and four wide in traffic.  A yellow came out on lap 19, setting up a single lap shootout.  Austin held off Hyer and Woodard to take the win, followed by Dan Smart and Erica Bell.

Marc Minutolo took the early lead in the 20-lap Marion Decker Agency Hobby Stock feature with Bruce Kinner moving into second spot.  Jamie Eldridge battled Aaron Miller for third as Minutolo gapped out on Kinner.  Miller grabbed third and challenged Kinner as Minutolo drove away up front.  Miller slipped in the final laps, handing third to Dave Decker.  At the finish, Minutolo recorded his first win of the season over Kinner, Decker, and Justin Eldridge.

Next Friday night will feature the Lucas Oil Empire Super Sprints, joined by a full 7 Star Show with the program starting at

7pm.  It will also be Active Duty and Veterans Night.  For more information, visit www.outlawspeedwayllc.com.