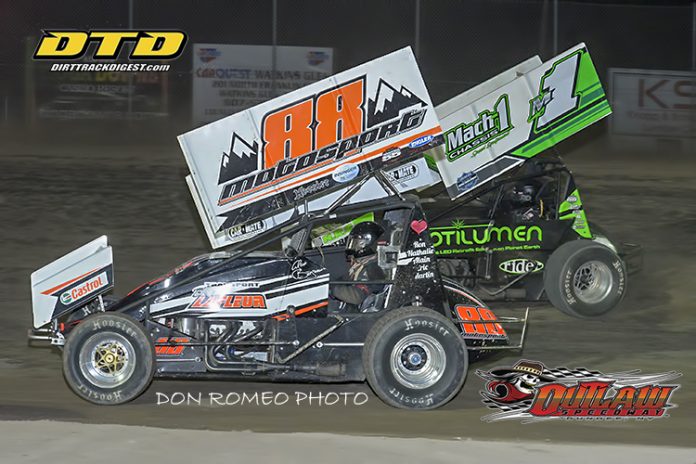 DUNDEE, NY – Mark Smith may have started on the pole in Friday night’s Lucas Oil Empire Super Sprint feature at the Outlaw Speedway, but the win wasn’t an easy one for the Sunbury, Pa., driver. Smith was chased throughout the 25-lap feature hard charging Davie Franek.

Smith was in traffic early with Franek never more than a few car lengths back. Ultimately Smith was able to make the right moves at the right time in traffic to pick up his first Empire Super Sprint win of the season in the NAPA Auto Parts Tour of the US A-Main presented by Mach 1 Chassis.

“I hate starting on the pole,” stated Smith in victory lane. “I’d much rather start in the second row because you never know where the track is going to go. Luckily we got in traffic pretty quick there and I was able to move around and figure out where I needed to go. It seemed like I could go pretty much wherever I needed to.”

The race got off to a rocky start as three attempts were needed to get the feature underway. Once it did, Smith blasted to the lead by sliding up in front of outside front row started Dave Axton.

Smith set a blistering pace during the opening laps while Franek was working hard to move forward from his sixth starting position. Smith found his groove on the top side of the racing surface and utilized that throughout the opening circuits.


Six laps were complete when Smith caught the back-side of the field. As he paced the competition, Franek continued moving forward taking over second on lap 10. From there on his focus was Smith who got bottled up in heavier traffic.

Franek rapidly closed in as he planted his ride on the inner portion of the speedway in turns one and two. By halfway he was on the back tail tank of the Smith ride looking for an opening. At one point he pulled even with Smith as they exited the second corner only to have Smith pick up the pace.

“I saw somebody stick it in there,” mentioned Smith. “I didn’t know who it was, but I figured it was somebody behind me. I didn’t know who was second. I was taking my time when I got to traffic. I was only going as fast as I needed to. When we needed to step it up we went faster.”

As the race continued the traffic got heavier forcing Smith to at times change his lane. With Smith moving around, Franek was able to again able to stay close to Smith. He continued making ground on the bottom of turns one and two.

With just five laps remaining Franek was in striking distance of Smith. Feeling the pressure, Smith made a daring three-wide move in traffic to keep Franek at bay.

Smith led the final few laps for the $2,125 victory. It was his 11th career A-Main triumph with the Empire Super Sprints. Franek, of Wantage, N.J., had no choice but to be happy with the second position.

“That was a tough one to swallow there because I felt like we had a little bit of a better car,” commented Franek. “He did get through lapped traffic better and he’s standing up there and we are here. We’ll go back to the drawing board and be better.”

Jason Barney, the current high point man with the Empire Super Sprints, crossed the line in the third position. Barney advanced from the eighth starting spot for his third podium in as many races to start 2018.

“It’s a great start,” said Barney. “I really hate for the Pennsylvania guys to come up here and beat on us like that. We had a good car. We just missed it a little bit. Those guys were good. It was a stacked field tonight. The race track was a lot of fun and racing in lapped traffic was great. I knew that was our only chance to make up any progress. It didn’t quite go our way, but we are very happy to be here and be top three.”

ESS/OUTLAW NOTES – A big field of 36 cars filled the pit area…After the two tries to get the A-Main started, it did go green to checkered for second non-stop event in a row at Outlaw…Weather claimed the event at Thunder Mountain the next night so the Lucas Oil ESS Gang will celebrate Memorial Weekend with a trip to Fonda on Saturday for the Earl Halaquist Memorial and then on to Utica-Rome the next night.