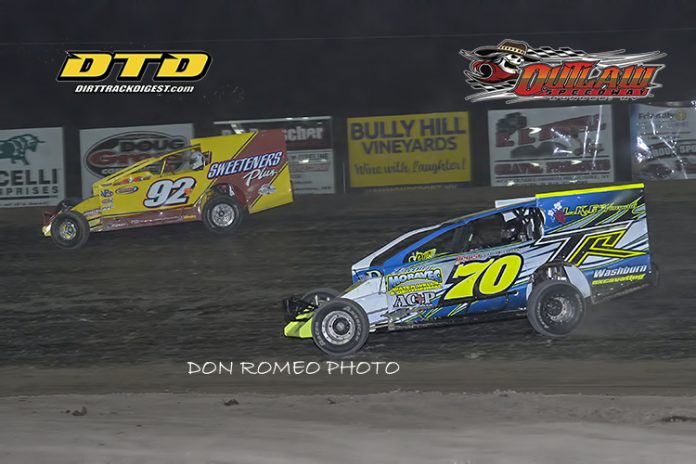 DUNDEE, NY – Mother Nature has not been very kind to virtually every race venue in the northeast throughout the early part of the 2018 season. However, for the first time this season the weather turned out absolutely perfect for the Friday night, May 18, 2018 action at the Outlaw Speedway and the cars and fans turned out in droves with 171 cars packing the pit area representing a number of different classes of competition and the grandstands rocking with anxious race fans.

Matt Sheppard continued his dominance of the Outlaw Speedway on Friday night. The Waterloo, N.Y., driver charged through the field from his 12th starting position to take the lead with only two laps remaining for his fourth victory of the season at the facility.

Brady Fultz and Greg Birosh put on a show early in the 30-lap main-event.   Fultz led the opening circuits before Birosh grabbed the lead on the top of the speedway on lap four.  Fultz stayed patient continuing to work the bottom while Birosh stayed up top.

Fultz regained the lead on lap 10. He stayed true to his line on the bottom of the track which helped him get back by Birosh.  From here he began to pull away from the field as Sheppard was starting to make gains.

At the halfway point it was Fultz at the front while Sheppard was busy with Alan Johnson as he attempted to get into the top five.  He eventually made it there a lap later.


Sheppard moved around the speedway in his CME Incorporated Bicknell working both high and low lanes on the track in order to get into second on lap 23.  From there he put his focus on Fultz.

Sheppard got to the back bumper of Fultz with only five laps to go.  Three laps later he made his move.  Sheppard went to the top of turns one and two to drive by Fultz for the lead.

He led the final two laps for the win with Fultz crossing the line a close second.  Cory Costa, Johnson and Eric Fisher completed the top five.

In Crate Sportsman action, 2017 Outlaw Speedway Track Champion, Karl Comfort was finally able to shake the gremlins that had plagued his team throughout the early part of the “18” season. Comfort who started seventh on the grid was able to use the bottom of the speedway to perfection as he easily got to the front and from that point there was no looking back for the Penn Yan, NY native as he cruised to his first feature win of the season. Dale Welty put on another one of his patented driving clinics coming from the sixth starting row to claim second at the finish. Nick Quererri rim rode his was to a solid third place finish at the end of the 25 lap feature as he was followed by Tommy Collins Jr. and last week’s feature winner, Brian Fish. Only a couple cautions slowed the event and like every other feature event the track was tacky and wide offering a multitude of racing grooves.

The Doug Gross Construction Crate Late Models may have seen a little short in numbers; however the drivers that took the opening green flag were all former feature winners either in Crate Late Model for 360 Late Model action so the experience factor was certainly there. After a lap one incident in turn one that sent Jason Knowles and Kurt Stebbins pit side for a quick look see at their damage the remainder of the 20 lap affair was a green to checkered run with both Knowles and Stebbins able to rejoin at the tail of the field. With Homan setting a blistering pace, multi time track and series champion, John Waters was slowly reeling in the race leader and with just a handful of laps remaining was able to move around Homan and claim the win. For Waters it was his first feature win at Outlaw Speedway in 2018 and vowed to return when his hectic Crate Late Model touring schedule would permit. Chad Homan was able to hold on for second with Damien Bidwell third. Jason Knowles made a nice recovery and fought an ill handling machine to claim fourth followed by Jason McGregor. Fans will be treated to a full contingent of Crate Late Models on June 1 when the Sweeney Rush Late Model Touring Series will make their lone engagement at Outlaw Speedway in 2018 for the 2nd Annual Gary Montgomery Memorial Event.

The Decker Farmers Insurance Agency sponsored IMCA Modifieds had a strong showing with some seventeen cars taking opening green from head starter Raymond Kennerup. Rodney Morgan made the long tow from Troy, Pa and after a spirited race long battle with Will Ward was able to claim the win. Todd Stone took off at the opening green flag and lead throughout the first half of the 20 lap feature go. However, Morgan worked the outside lane to perfection and moved to the top spot and after holding Ward off on a couple of late race restarts was able to claim the win. Will Ward was credited with second as the checkered flag waved followed across the line by Todd Stone, Billy Ward and Keith Jack Lamphere.

The mighty 4 Cylinder division boasted a full field of 24 cars and at the drop of the opening green flag it was 2017 Track Champion Mike Stone leading the parade. A fee caution flags and one red flag stoppage for a turn four incident that saw several cars exit the track at the exit of turn four slowed the event. But, throughout the event Stone drove a steady race hitting his marks to perfection and came home for the win after then race leader, Ray Hyer was disqualified in a post-race rules infraction. Like Karl Comfort before him, Mike Stone was relieved to finally find victory lane after a sluggish start to the 2018 season in his quest to defend his title. Female and crowd favorite, Erica Bell drove a flawless race and finished second followed across the line by last week’s winner, Adam Austin who came from deep in the field. Chris Woodard who started alongside Austin in the ninth starting row finished fourth with Scott Lehman claiming fifth.

The Decker Farmers insurance Hobby Stock Division continues to grow in numbers with fifteen cars taking the opening green flag. Veteran racer, Dave Yehl set the early pace and behind him fans were treated to a fierce battle with no less than a half dozen cars running two and three wide looking to advance. A late race caution wiped out an insurmountable advantage held by Yehl and that is all Marc Minutolo needed to close the gap and take advantage on the ensuing restart. Minutolo was able to clear Yehl and went on for the win, but credited Dave Yehl in victory lane for his outstanding driving performance. Yehl did hold on for a disappointed runner up finish chased across the line by Justin Elbridge and Aaron Miller. Allison Pierce continues to improve and ran an impressive 15 lap feature to round out the top five.

The Classy Looking Street Stocks wrapped up the action packed night with their 20 lap feature. A full field of 24 cars took the opening green flag and with the race track still showing plenty of bite and width it was veteran Dundee, NY native Carl Cleveland showing that last week’s feature win was no fluke as he bested a stellar field of veteran Street Stock competitors. Glen Whritenour was all over Cleveland throughout the final one quarter of the feature and tried every trick in the book to get around the high flying Clevelend but came up just one spot short and had to settle was a well-deserved second. Kurt Stebbins chased Whritenour across the line followed by C.J. Guererri with veteran full fendered competitor Gene Balmer claiming fifth.

Next Friday, May 25 the Outlaw Speedway will kick off the Memorial Day Weekend with a Super 7 Show. Also on the card it will be the first 1 on 1 Spectator Races of the 2018 season. It will be United Way night sponsored by Sunrise Insulation of Dundee and fans are encouraged to bring along their campers and stay the night with free parking.

Pit gates open at 4:00 pm with the main grandstand seating area swinging the gates at 5:00 pm. Free rides on Outlaw Crusher, the tracks monster truck will start at 5:30 pm.

Ticket prices for both pit and grandstand entry along with other valuable information including the current point standings, directions to the speedway and contact information is just a click away at www.outlawspeedwayllc.com.