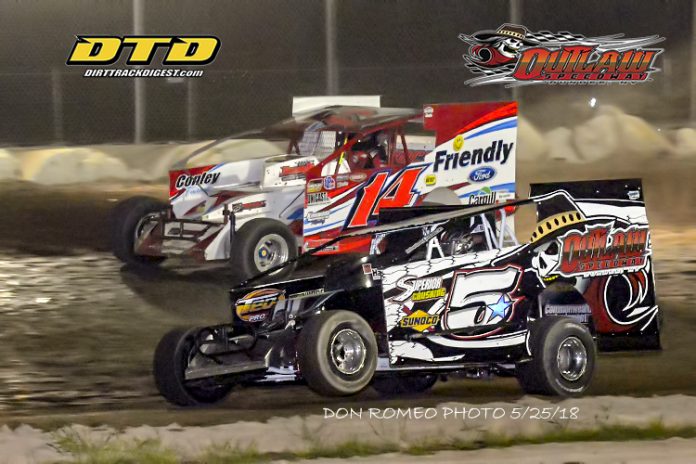 DUNDEE, NY – Sunrise Insulation night at Outlaw Speedway proved to be an interesting one.  After the completion of the qualifying heats, the track lights in turns 3 and 4 did not come on.  Refusing to give up, the track crew, with assistance from driver Ray Hyer and others, worked for two hours to solve the problem…and finally, the lights came back up and the feature events began.

Greg Birosh powered past early leader Derrick Podsiadlo a few laps into the Friendly Chrysler Dodge Jeep Ram Outlaw Modified feature to sail away to a solid lead.  Tyler Siri and Alan Johnson were using the high side of the track as well as they chased the lead duo.  Justin Wright’s car stopped on track on lap 15, which brought the field back togather for a restart.  Matt Sheppard had moved into fifth, and gained track position with the yellow.  Siri grabbed the lead from Birosh as Johnson slipped into second.  Sheppard grabbed third and a lap 26 caution bunched the field again, which allowed Johnson to power around Siri to snap Matt Sheppard’s 4-race win streak.  Siri, Sheppard, Birosh, and Steve Paine rounded out the top five.

The Crate Sportsman feature saw a great battle up front in the first half of the event between several drivers.  Kirk  Reynolds, Brandon Butler, and Loren Lincoln all took turns leading, but Karl Comfort and Chris Silvers were closing in.  Comfort took the lead from Lincoln on a restart, with Silvers and Brian Fish also moving into the top three.  A lap 22 caution set up a three lap shootout, with Comfort taking the win over Silvers, who nearly got nipped by Collins, who passed several cars in the final laps to take third.  Brian Fish and Jimmy Zacharias rounded out the top five.


In the Crate Late Model feature, Chad Homan streaked out to the lead with Briand and Jason Knowles battling each other for second.  Knowles got past Homan after a restart as John Waters passed Knowles for third.  Once out front, Jason was able to gap out on Homan, who in turn distanced himself from Brian, who had retaken the third spot, leaving Waters to battle with Steve LaBarron for fourth and fifth.  LaBarron went flying off turn three on lap 14, ending his night and setting up another restart.  After another yellow for Waters losing a wheel, Jason Knowles powered home for the win over Homan, Brian Knowles, Brad Messler and Wayne Robertson.

The Crate Late Model heat was won by Chad Homan.

The IMCA Modified feature event began with Rich Karlnoski jumping out to the lead while Will Ward sliced through the field to second spot.  After a quick yellow, Ward grabbed the lead on a restart as Rodney Morgan began to move through the field, getting second just past halfway.  Morgan could not catch Ward, who took the checkers.  Brad Smith overcame an early race spint to charge back to third, followed by Karlnoski and Phil Yaw.

CJ Guererri grabbed the lead on lap 3 of the Street Stock feature and pulled to a straightaway lead at the halfway point.  Glenn Whritenour moved past Lavern Knickerbocker and Jeremy Trank to the second spot.  Jared Hill also moved up, as did Quinn Sutherland, but the gap for Guererri stayed the same and he cruised home to the win over Whritenour, Hill, Sutherland, and Knickerbocker in a caution-free contest.

In the 4 Cylinder feature, Mike Ferris and Mike Stone battled for the early lead as Adam Austin charged from his 14th starting spot to fifth by lap 5.  Stone eventually took the lead as Austin moved past Ferris just before halway for second.  After a quick yellow, Woodard got to third and he and Austin put pressure on leader Stone.  Austin and Stone battled side by side with Austin finally snagging the lead coming to the white flag.  Austin went on to take his third win of the year over Stone, Woodard, Erica Bell, and Ray Hyer.

The Hobby Stock feature was another wild battle all through the pack, with Jamie Eldridge wrestling the lead away from Eric Williams a few laps in.  David Yehl moved up to challenge Williams for second, along with Joe Birdsall.  At the finish, Eldridge had his second win of the year in the class, followed by Williams.  Yehl held off Birsdall by a bumper for third, with Allison Pierce grabbing fifth.

Austin LaBar took the lead from the start, but slowed on lap 6 of the Winner’s Circle Deli Bandit feature, handing the top spot to Cameron Nichols.  Nichols held off Brooke McClain for the win.  In the Rookie Sportsman feature, Billy Paine held off TJ Zacharias to grab the victory.

Next Friday night, the RUSH Crate Late Model tour visits for the annual Gary Montgomery Memorial, along with the other regular divisions.  Racing starts at 7:00 p.m.  For more information, visit www.outlawspeedwayllc.com.