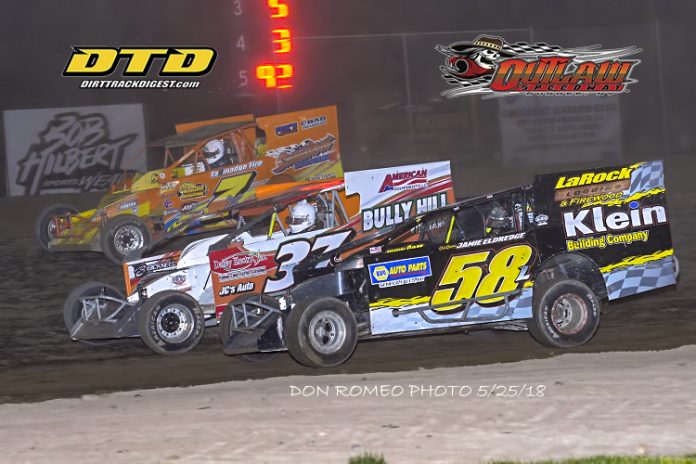 DUNDEE, NY – A man that was synonymous with racing all over the Upstate New York State Region will once again be honored as the 2nd Annual Gary Montgomery Memorial event will be held at the Outlaw Speedway on Friday, June 1, 2018. The popular Yates County speed plant opens up the month of June with the running of the Sweeney Chevrolet, Buick, GMC Rush Late Model Touring Series in conjunction with a Super 6 Show and the second in a series of bicycle give-a-ways held throughout the year.

After a long and courageous battle with cancer, Montgomery passed away in November of 2016 and left behind a loving family that will be invited back to the Outlaw Speedway to help present the trophy to the winner of the Rush Late Model feature event. Last year, Canisteo, NY native and long time 360 Late Model and Crate Late Model competitor, Bryce Davis claimed the victory over a stellar field of drivers many of whom competed in Montgomery’s 360 Can Am Series. It is uncertain if Davis will be back to defend last year’s win as he is currently focused on Super Late Model competition, however you can be certain that when the Vicki Emig and Mike Leone led Rush Late Models make their return voyage to the Outlaw Speedway they will bring along many of the top names that compete in the series all looking to get their hands on the prestigious Gary Montgomery Memorial Trophy.

In addition to the Sweeney Rush Late Models in competition it will be the Friendly CDJR Big Block/Small Block Modifieds, the Crate Sportsman along with the classy Street Stock Divisions. Rounding out the night of action it will be the 4 cylinders, the Decker Farmers Insurance sponsored Hobby Stocks and IMCA Modifieds as well as the Winners Circle Deli Bandits.


Free rides around the facility including laps around the 4/10 of a mile clay oval on the tracks Monster Truck, “Outlaw Crusher” begin at 5:30 pm.