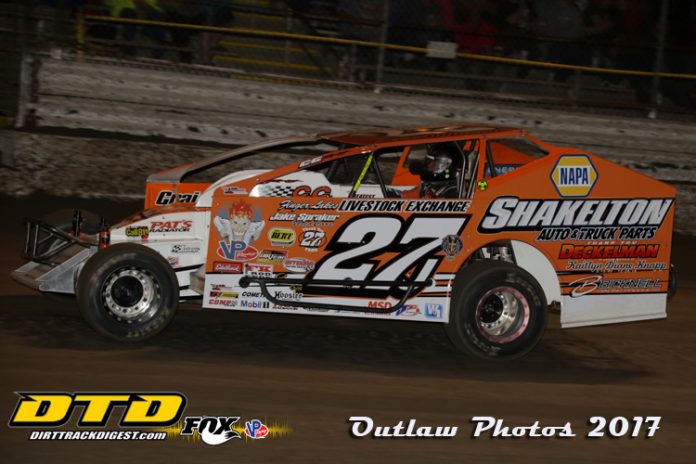 DUNDEE, NY –  “ The Doctor of Modified Racing”, Danny Johnson will make a return to the Outlaw Speedway this Friday, June 1, 2018 piloting the back-up machine of track owner, Tyler Siri.

In continuing to build the Outlaw Speedway into the Friday night race place, Siri looks at the addition of “The Doctor” as nothing but a positive for the Yates County Speedway.

“For three years we have been working tirelessly to build Outlaw Speedway into the premier race facility that it has the capabilities of being, stated Siri. With such standout Modified drivers at Matt Sheppard, Alan Johnson and Steve Paine and a schedule of events for this year that will rival that of any other race venue in the northeast we feel very strongly that we are on the right track. The addition of Danny Johnson to our weekly program solidifies that fact.”

Siri, has several TEO Pro Cars and Billy the Kid power plants in his arsenal and he plans on putting Johnson in a brand new piece. The car that he will drive will be available to him every Friday night throughout the remainder of 2018 at Outlaw Speedway including the Brett Deyo Short Track Super Series race scheduled for June 20.

“Danny has a proven track record at Outlaw Speedway and really knows how to get around the 4/10 of a mile oval. My crew guys are psyched and ready to go. We have the car all lettered up with his familiar number 27j and it looks really sharp!”

It is no big secret that Johnson and Siri have had their run in’s over the past few years, but according to Siri, “We have put all that behind us. Outlaw Speedway is a business and I have to treat it that way. If The Doctor can come here and be the threat to win that I know he will be, than it is going to put a lot more butts in the seats.”

Johnson has a tremendous following in the Finger Lakes Region of Upstate New York and it is anticipated that when he arrives at Outlaw Speedway on Friday there will be a large contingent of Danny Johnson followers now that word is on the street.

Ironically with Johnson picking this Friday to gear up as a hired gun for Siri, it comes on the night of the 2nd Annual Gary Montgomery Memorial event at Outlaw. Johnson and Montgomery had an announcer/driver relationship that lasted for several decades throughout both of their Dirt Motorsports careers. Danny Johnson has been labeled “The Doctor”, “Danimal” and “Dangerous Dan the Stock Car Man” and it was Montgomery who had a hand in coming up with some of those surnames.

Free rides around the facility on the Outlaw Speedway Monster Truck, Outlaw Crusher start at 5:30.

Free parking and camping is available.

For more information on the track, directions, contacts, point standings as well as the complete 2018 schedule of events log on at www.outlawspeedwayllc.com.