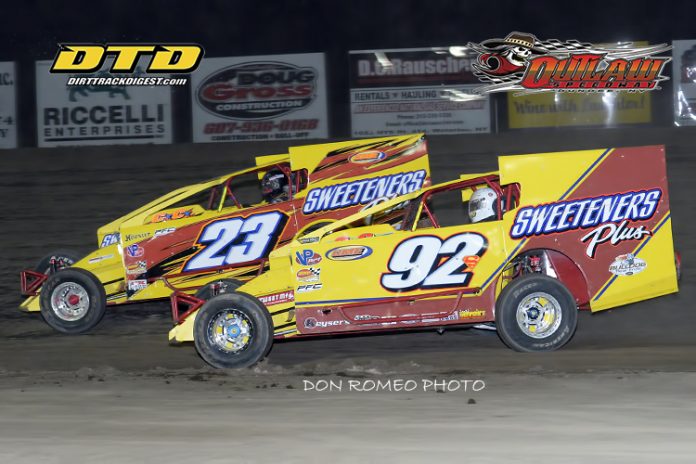 DUNDEE, NY – A perfect night greeted a full house of fans for the first of two appearances of the Arctic Cat All Star Circut of Champions presented by Mobil 1 at Outlaw Speedway.  The All Stars event also featured Tony Stewart in competition.

After Cale Conley flipped in turn four on the start, the All Stars ‘A’ Main got underway with Paul McMahan rocketting out to a big lead.  The yellow flew when Parker Price-Miller’s motor expired, which put Chad Kemenah in second behind McMahan.  A red flag on lap 10 for a three car crash involving Brock Zearfoss saw the field stop to refuel.  Danny Dietrich

grabbed second on the restart but had to contend with Dave Blaney as the leaders hit traffic.  Blaney hit an infield tire and destroyed the front end of his car as McMahan held on for his first All Stars win since 2002.  Dietrich, Chad Kemenah, Aaron Reutzel, and Trey Starks rounded out the top five.

The Friendly Dodge Chrysler Jeep Ram Outlaw Modified feature began with Ron Cartwright Jr taking the early lead for several laps until Kyle Coffey used the outside lane to take the lead.  Tyler Siri and Matt Sheppard were next to challenge Cartwright.  That duo passed him, then Sheppard got by Siri for second and moved past Coffey for the lead just past
halfway.  Siri, Coffey, Eldon Payne, and Alan Johnson all battled for position as Sheppard pulled away to take another win in the caution-free event.  Siri was a distant second, followed by Alan Johnson, Payne, and Coffey.

In the Crate Sportsman feature, Brandon Butler and Stacy Jackson battled for the lead early on, with Todd Heyward coming up to make it a three-way battle as Jimmy Zacharias and Nick Guererri raced for the fourth spot.  Zacharias got by Butler just after the halfway point and passed leader Jackson with five laps to go and held him off in a two lap dash to the finish to record his first Outlaw Speedway win by a car length.  Guererri, Dustin Jordan, and Butler followed them across the line.

The Street Stock feature event saw Quinn Sutherland take the lead on an early restart and hold the top spot through a few restarts while Chuck Winslow and Glenn Whritenour came from outside the top ten to the second and third spots.  The trio pulled away in the second half of the feature and crossed the line in that order.  Jared Hill came back from an early race incident to take fourth with Dave Matwiejow rounding out the top five.

In the Marion Decker Agency IMCA Modified feature, Rich Karlnoski led from the drop of the green till Will Ward slid under him at lap 10 and cruised to his second feature win in a row.  Brandon Smith and Rodney Morgan fought side by side over the finals laps for second, with Morgan getting the position at the checkers, followed by Smith, Phil Yaw, and Karlnoski.

The 4 Cylinder feature saw a multi car crash take out several cars just a couple of laps into the event.  Joshua Oles held the lead and held back challenges from Chris Woodard and Ray Hyer to take his first win in the division.  Woodard, Hyer, Adam Austin, and Desi Force.

Next Friday night will feature the Jeff Searles Memorial and the Mid Season Championships with a full 7 Star Show with the program starting at 7pm.  It will also be Active Duty and Veterans Night.  For more information, visit