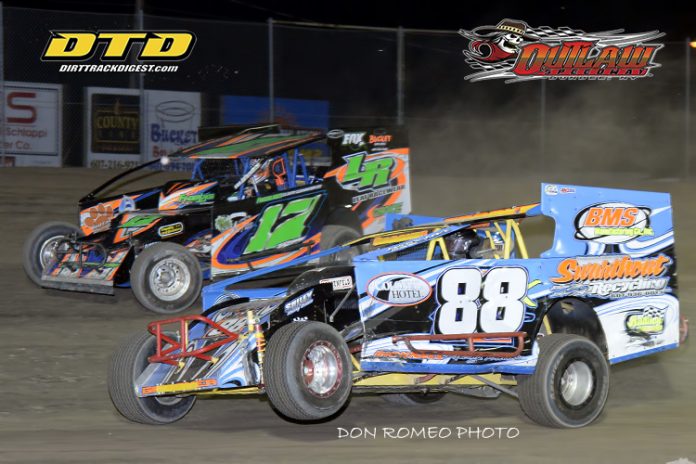 DUNDEE, NY – Mid-June at the Outlaw Speedway means Mid-Season Championship Night for all the regular classes of competition. On the card it will be the headline Friendly CDJR Modified Division as they will be supported by a slew of other classes including the Crate Sportsman and Doug Gross Construction Crate Late Models. Also in action it will be the classy looking Street Stocks, the Decker Farmers Insurance Agency sponsored IMCA Modifieds and Hobby Stocks. The 4 cylinders and Winners Circle Deli Bandits make up the Super 7 Show.

Nearing the half way mark of the 2018 campaign at the Outlaw Speedway Friendly CDJR standout competitor, Matt Sheppard continues his strangle hold on the top point position, but keeping Sheppard within their cross hairs are other top Modified pilots like Alan Johnson, Steve Paine, Eric Fisher and Outlaw Speedway owner, Tyler Siri.

As one might expect the point battle in the Crate Sportsman Division is so tight that the entire top five in the point spread is within a mere 10 points from the top spot to fifth place. Chris Fisher, Brian Fish, Tommy Collins Jr. Dale Welty and 2017 Track Champ, Karl Comfort are a looking for the Mid-Season Championship Trophy. Likewise in the Doug Gross Construction Crate Late Model Class as Jason Knowles holds just a few point advantage over Chad Homan and Brian “Pork Chop” Knowles.

Going into the Mid-Season Championship races 2017 Track Champion, Glen Whritenour holds a slight edge in the Street Stock points over Carl Cleveland and CJ Guererri. Chris Woodard and Adam Austin are in a tight point battle in the 4 Cylinder Division. The Decker Farmers Insurance IMCA Modified top point getter thus far is Will Ward and it is Marc Minutolo leading the point tally in the Decker Farmers Insurance Hobby Stocks. Austin LaBar leads the points in the Winners Circle Deli Bandit Division heading into the Mid- Season Championship races.

Long time Outlaw Speedway fan, Jeff Searles who was a main stay at the track for decades before his passing will once again be honored with the night named in his memory.

Free rides on the Outlaw Speedway Monster Truck, “Outlaw Crusher” begin at 5:30 pm.
Camping is always free at the track

Pit Admission as well as Adult and Senior Grandstand ticket prices can be found on the track web site along with other valuable information including track contacts and news, the current 2018 point standings, press releases and directions to the facility. Just log on at www.outlawspeedwayllc.com.