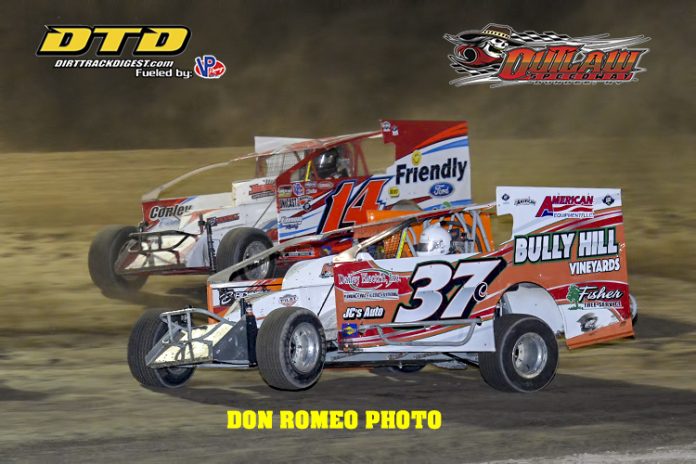 DUNDEE, NY – After an August 3 rainout as well as a previously scheduled night off at the Outlaw Speedway on Friday, August 10, it will be business as usual when the track swings the gates open for the August 17 event which will feature a Super 7 Show.

All the local Boy Scouts from throughout the area are invited will be at the track proudly wearing their uniforms and the kids will be on board complements of the track. It will also mark the 3rd 1 on 1 Spectator Races of the 2018 season. In addition the track will also sponsor another bicycle give a way.

The Friendly Chrysler, Dodge, Jeep Ram Modifieds will headline the show along with the Crate Sportsman, the Doug Gross Construction Crate Late Models and the Classy Street Stocks. Also on the card it will be the Decker Farmers Insurance sponsored Hobby Stocks and IMCA Modifieds along with the 4 Cylinders and the Winners Circle Deli Bandits.
Pit and grandstand gate times as well as all ticket prices can be found on the track website and Facebook accounts.

When the 2018 schedule of events was released early in the year it showed a scheduled break in the activity on Friday August 10. Unfortunately due to Mother Nature the track lost the Annual NASCAR Night the week prior which now will give everyone concerned a two week respite. It will be a sure bet that when the action returns on August 17 the racers and fans will be more than ready to get back to business and with the point battles very tight in all of Outlaw Speedway’s regular classes of competition the competition on the track will be fast and furious as the season is starting to make a turn for home.

For more information regarding the track including the current point standings, the remainder of the 2018 schedule of events, a track contact list as well as directions to the speedway just click on at www.outlawspeedwayllc.com. You can also find us on Facebook at facebook.com/OutlawSpeedwayLLC/