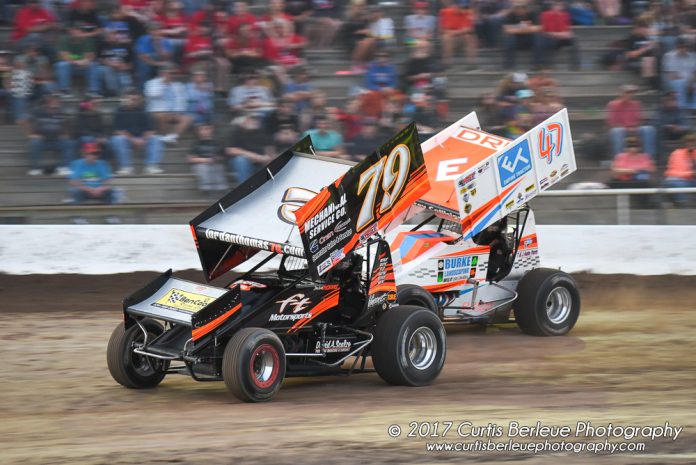 DUNDEE, NY – After a previous rainout on August 3 where the A. Verdi Storage Containers Patriot Sprints were to be run in conjunction with the Annual NASCAR Night at the Outlaw Speedway, the popular 360 Sprint touring group will be back at the Yates County oval on Friday, August 24, 2018 as part of Food Pantry Night.

Mike Emhoff of the Patriots and Tyler Siri of Outlaw Speedway have agreed to terms allowing the Patriot Sprint Tour to make another appearance at the track as a stand -alone sprint event which will be run in conjunction with the tracks Super 7 Show including the Friendly Chrysler, Dodge, Jeep, Ram Modifieds, the Crate Sportsman as well as the classy Street Stocks. Also on the card it will be the Doug Gross Construction Crate Late Models, the Decker Farmers Insurance sponsored IMCA Modifieds and Hobby Stocks as well as the 4 cylinder Divisions. The Winners Circle Deli Bandits and the Sportsman Rookie classes will have the night off.

All gate times and ticket prices for both pit and grandstand entry can be found on the tracks web site or Facebook page.

With rainouts causing havoc at many race facilities and traveling series in particular loosing shows on a regular basis due to the enormous amount of rain the northeast quadrant of the United States has experienced throughout the entire 2018 race season, Siri felt it was a good faith effort to bring back the Patriot Sprint Tour and find a date to fit them in prior to the tracks hectic September schedule which will include the return of the Tony Stewart All Star Circuit of Champions and the inaugural running of the World of Outlaws Late Model Series. Outlaw Speedway is the perfect size venue for Sprint Cars and is located in a region that is continually growing in spectator interest. With that said both Emhoff and Siri felt the drivers, race teams, sponsors and fans needed to somehow get this show into the books thus the August 24 make-up.

It will be Food Pantry Night at the Outlaw Speedway and for more information regarding the track, its sponsors, the 2018 schedule of events, contacts, current point standings, directions to the speedway and much, much more simply click on at www.outlawspeedwayllc.com.

You can also check us out on Facebook for constant updates particularly on race day. Follow along at www.Facebook.com/OutlawSpeedwayLLC/