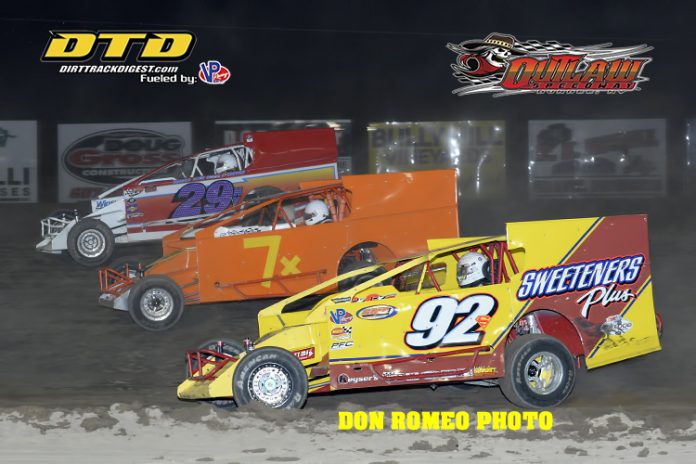 DUNDEE, NY – It doesn’t seem possible, but the final point night of the 2018 season at the Outlaw Speedway will be on Pepsi Night Friday, August 31, 2018. The point battles are remarkably close in virtually every one of Outlaw Speedway’s regular classes of competition and to make it even more interesting the drivers will be racing for double feature points in the August 31 point finale.

The track has experienced several rained out events since the season opener in late April, however the nights of action that have been put into the record books have proven to be nothing short of spectacular and the tight point battles in each class reflects the close competition that each division has to offer.

With Double Points on the line in feature event action for every class no current point leader can rest on their laurels.

“We like the idea of a Double Point Finale at the track stated Outlaw Speedway owner/promoter, Tyler Siri. Every driver in each of our regular classes has raced hard to get where they are at heading into the point finale. The Double Point Championship Night will keep everyone on their toes and race hard right up to the final feature checkered flag. It opens the door for a tremendous amount of movement within the top ten as that is what we will be rewarding at the January 2019 Banquet.”

Outlaw Speedway not only can boast one of the highest paying weekly purse structures throughout the region for all its weekly classes, but the track also pays out a huge point fund at the annual awards banquet.


During the program, no less than 50 back packs loaded with school supplies will be given out to a number of lucky student’s compliments of the track ownership as a show of support for the families and kids that support Outlaw Speedway.

All gate times and admission prices for both pit entry and grandstand seating can be found on the homepage of the tracks web site or on Facebook.

At the conclusion of the August 31 event Outlaw Speedway will take a previously scheduled night off on September 7 as this will allow all the race teams as well as the track management and staff members a chance to prepare for what promises to be an aggressive September schedule of events including the return of the Tony Stewart Artic Cat All Star Circuit of Champions 410 Sprint show on September 14. The World of Outlaw Late Model Series will make their inaugural appearance at Outlaw on Friday, September 21 as part of the two night Fall Nationals. More details on both events will be upcoming.

For more information relevant to the track, its sponsors, contact personnel, the remainder of the 2018 schedule of events as well as the current point standings just log on at www.outlawspeedwayllc.com.