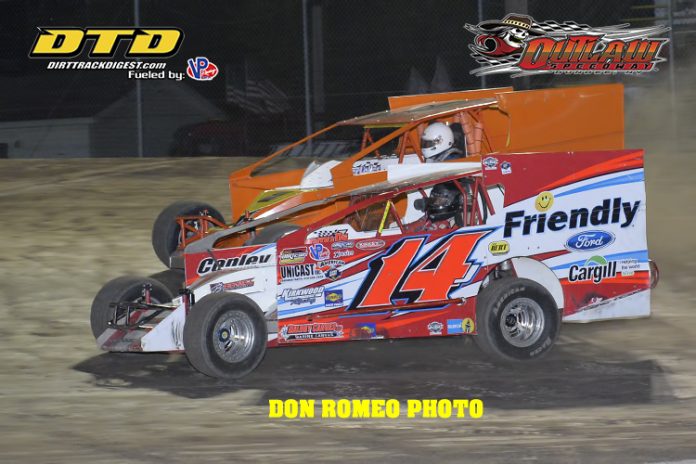 DUNDEE, NY – Friday night was Pepsi Championship Night at Outlaw Speedway, with the majority of the classes featuring battles for the track championship that would be decided on the outcome of the feature events.

The Friendly Dodge Chrysler Jeep Ram Outlaw Modified feature only got half a lap in before a multi car melee sent Justin Wright flipping, bringing out a red flag.  Wright was OK after the crash.  When racing resumed, Alan Johnson took the lead with Steve Paine second and Matt Sheppard third…with 23 points separating them as the top three in the championship standings coming into the race.  Paine took the lead, with Sheppard taking second a handful of laps later.  Kyle Coffey suffered a flat on lap 13, bunching the field and bringing Danny Johnson into the mix in the fourth spot.  Lap 22 is where things went sideways, as Sheppard had a flat right rear and Danny Johnson went pitside.  Paine led the rest of the way for the victory, with Alan Johnson second, followed by Eldon Payne, Eric Fisher, and Derrick Podsiadlo.  Sheppard made it back to 6th at the checkers, which was not enough to hold on to the point lead.  Johnson and Paine were tied in points, with feature wins breaking the tie.  Alan’s 3 wins on the season was one better than Paine, so Johnson was crowned the track champion.

Kirk Reynolds led the opening laps of the Crate Sportsman feature until Loren Lincoln grabbed the lead on a lap 5 restart.  Brian Fish took the top spot two laps later as Reynolds brought out a yellow at lap 12 with a blown engine.  Fish led on the restart as Chris Fisher and Tom Collins Jr battled hard for second.  Fisher and Collins were separated by only 3 points coming into the feature.  Chris Silvers hit a marker tire to bring out a yellow on lap 22, setting the stage for a 3 lap shootout.  Fish held on for the win, followed by Fisher, Collins, Lincoln, and Jimmy Zacharias.  Fisher’s runnerup finish was enough to take the track championship battle.


Brian Knowles and track champion Chad Homan spent the 20-lap Crate Late Model feature in a one on one duel as Jamie Freeman ran behind them in third.  Brian’s car seemed to handle better as the race went on, and he took the win over Homan and Freeman.

Billy Ward and Shawn Bruce battled for the lead in the Marion Decker Agency IMCA Modified feature through the opening laps, with Ward holding the point for several laps until lap 15, when Bruce slid by with Brad Smith in tow.  Ward shredded a right rear one lap later and went pitside under yellow to change it.  Bruce, even with sheet metal rubbing on the right rear, took a 4 car length win over Brad Smith, Morgan, Brandon Smith, and Phil Yaw.  Point leader Will Ward did not start the feature due to engine problems, but had enough of a point cushion to hold the championship.

Glenn Whritenour had enough points in the bank to clinch the 2018 Street Stock track title just by taking the green in the feature event, and started 10th in the field for the regular season finale  CJ Guererri took the lead from Gene Sharpsteen on lap 3, but then spun on lap 8.  Sharpsteen retook the lead over Carl Cleveland as Quinn Sutherland and Whritenour battled for fourth.  Sutherland spun on lap 13, which moved Jared Hill into fourth.  The final few laps saw an intense battle among the top five, with Sharpsteen holding on for the win, followed by Guererri, who came from the rear, Whritenour, Hill, and Cleveland.

Chris Woodard and Adam Austin were separatted by 3 points coming into the night’s 4 Cylinder feature.  Erica Bell was the early leader until contact sent her spinning, setting up a battle between Brian Grant Jr and Austin for the lead, with Ray Hyer battling Woodard for third.  Grant’s engine blew and flamed up, knocking him out of the race with 4 laps to go.  Austin inherited the lead and Woodard wrestled second from Hyer on the restart, but could not catch Austin, who took the title with the win.  Woodard, Hyer, Derrick Puryear, and Scott Lehman rounded out the top five.

In the Marion Decker Agency Hobby Stocks, a four car battle for the lead featured Justin Eldridge, Jamie Eldridge, Aaron Miller, and Bruce Kinner, with Eric Williams and Marc Minutolo, the point leader, joining the fray at halfway.  Williams retired with a smoking car on lap 13, and the battle continued to the finish, with Jamie Eldridge capturing the win by a bumper over Miller, followed by Justin Eldridge, Bruce Kinner, and Ralph Champion Jr.  Marc Minutolo’s 6th place finish was enough to lock down the track championship in the class.

In the Winner’s Circle Deli Bandits, Austin LaBar locked down the track championship by winning the feature event over Steven Perkins III.