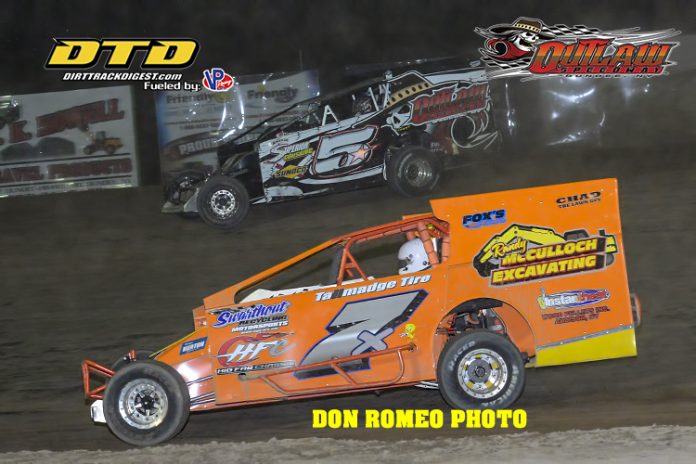 DUNDEE, NY – Outlaw Speedway hosted the Arctic Cat All Star Circuit Of Champions presented by Mobil 1 for the second time in 2018 on a beautiful night for racing.

Ryan Smith and Carl Bowser shared the front row for the 30-lap All Star ‘A’ Main, with Smith taking the early lead.  Point leader Aaron Reutzel moved to second a few laps in as the leaders hit lapped traffic.  Brock Zearfoss and Chad Kemenah battled for fourth as Carson Macedo battled Reutzel.  Kemenah spun on lap 14 to bring out a yellow, and on the restart, Smith again gapped out on Reutzel.  Macedo took second with five to go and tried to run down Smith, making the pass for the lead on turn 3 on lap 28 to take the win.  Smith, Reutzel, Zearfoss, and Paul McMahan rounded out the top five.

Pistons Dash and in Lincoln Electric time trials, Aaron Reutzel set fast time at an 11.590, which stands as a new track record.

In the Friendly Chrysler Dodge Jeep Ram Outlaw Modified feature, Tyler Siri took the early lead and put some distance on the field as Cory Costa grabbed second and Steve Paine moved to third.  A lap 13 yellow for Derrick Podsiadlo bunched the field, and Siri, Costa, and Paine had a furious battle for the lead.  Paine wrestled the lead away on lap 22 and a couple of laps later, Siri spun in turn 2 and was tagged by Costa.  That put Alan Johnson and Justin Wright into second and third, but neither could stay with Paine, who recorded his third win of the season.  Johnson, Wright, Eldon Payne, and Brady Fultz rounded out the top five.

The Outlaw Crate Sportsman Series got one lap in when leader Jimmy Zacharias’s car erupted in flames, bringing out a red flag.  Tom Collins Jr then took the point over Dale Welty and Chris Fisher, but Todd Heyward’s flat on lap 13 set up another restart.  The race was stopped again after a mutli car tangle sent Nicole Hoag flipping into turn three.  She was OK after the crash.  Collins gain led on the restart as Brian Fish moved past Welty, who fell into a battle with Kenny Hammond and Brett Buono.  Collins took the win, with Fish, Welty, Hammond, and Buono rounding out the top five.

Quinn Sutherland grabbed the top spot at the start of the 20-lap Street Stock feature, but Glenn Whritenour ran him down at lap 10 to battle for the lead.  A few laps later, Whritenour headed pitside, which moved CJ Guererri and Dylan Cecce into the top three.  Leader Sutherland had a flat tire with two to go, handing the lead to Guererri, who held off Cecce for the win, followed by Jared Hill, Carl Cleveland, and Aksel Jensen.

Mike Koser and Larry Colton battled for the lead in the 4 Cylinder main event with Ray Hyer closing in from third after passing Chris Woodard.  Hyer took the lead on a lap 10 restart by leapfrogging up from third and carried the lead to the checkers, folllowed by Koser, Woodard, Colton, and Casey Burch.

In the Marion Decker Agency Hobby Stock feature, Bruce Kinner and Frank Burnell battled for the lead with Burnell getting the top spot just before a lap 15 yellow.  Burnell held off Kinner on the restart for the win, followed by Kinner, Jarred Dennis, Aaron Miller, and Jason Clugstone.

Next up at Outlaw Speedway will be the Fall Nationals, with the September 21st event topped by the first ever appearance of the World Of Outlaws Late Model Series, while the Friendly Chrysler Dodge Jeep Ram Outlaw Modifieds and 360 Sprint cars headline the September 22nd race card.  For more information, visit www.outlawspeedwayllc.com.