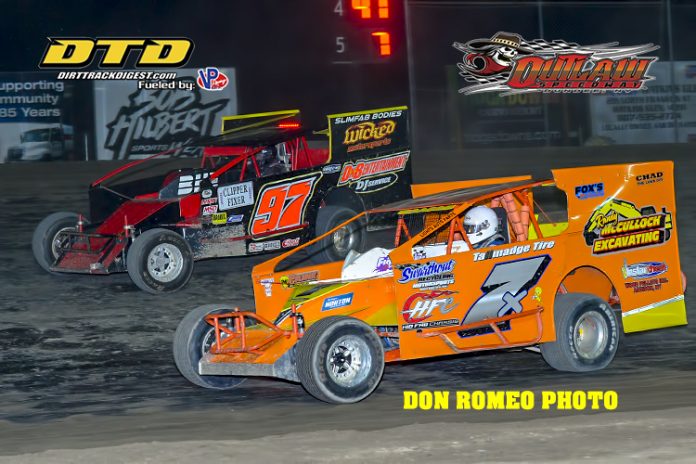 DUNDEE,NY – After rain halted Friday night’s portion of the Fall Nationals at Outlaw Speedway, a much better weather day greeted fans and competitors for Saturday’s scheduled portion of the race weekend, presented by Tioga Downs Casino and Resort.

The Patriot Sprint Tour ran a 27-lap ‘A’ Main to pay tribute to the late Greg Hodnett.  Dave Franek took the lead on lap 6 as Lucas Wolfe moved into second just before the yellow flew on lap 10.  Chuck Hebing blasted from fourth to second on the restart, but Wolfe took it back two laps later as Franek charged away.  A final restart on lap 20 allowed Wolfe to challenge Franek, but Franek again streaked away to take the win over Hebing, who grabbed second by inches at the line over Wolfe.  Joe Trenca and Jason Schultz rounded out the top five.

Hutchinson and Parker Evans werre the top two in the 15-lap Dash held over from Friday night.  The B-Main was captured by Derek Locke and the Dash win went to Dave Franek.  Steve Davis took the lead at the start of the Friendly Chrysler Dodge Jeep Ram ‘Gunslinger 50’ for the Outlaw Modifieds and held it till Steve Paine grabbed the top spot in traffic on lap 11.  Alan Johnson and Davis then battled for second until Marcus Dinkins slowed on lap 20 to bring out a caution.  Johnson took second when the race went back to green and  chased Paine into traffic.  The yellow flew again when Eldon Payne got hung up battling traffic and tagged an infield tire on lap 37.  Paine again pulled away on the restart and took his second straight win over Johnson, Davis, Cory Costa, and James Sweeting.


Cory Costa and Steve Davis were the top two in the 15-lap Dash held over from Friday night.

In the 30-lap Outlaw Crate Sportsman Series feature, Dustin Jordan led through the first half as Brent Ayers and Dave Marcuccilli battled for second.  The race’s first caution flew on lap 19 when Ray Bliss coasted to a stop.  Marcuccilli took second from Ayers on the restart and battled Jordan for the lead, taking the top spot on lap 21.  Marcuccilli pulled away to  collect the win over Jordan, Steve Gray, Brent Ayers, and Casey Pavlick.

The 20-lap Crate Late Model feature saw Jason Knowles and John Waters battle for the lead through several restarts until Knowles had trouble on a lap 8 restart, spun, and was collected by Jason McGregor.  Waters and Chad Homan fought for the lead after that, with Homan getting the lead on lap 15 and pulling away for the win over Brian Knowles, Waters, Alan Chapman, and Steve LaBarron.

Rich Michael Jr took the lead from Rodney Morgan at the start of the 20-lap IMCA Modified Fast Shaft Series contest and had pulled over a straightaway lead on Brandon Smith when the yellow flew for Bob Maynard’s stalled car on lap 10.  Michael again pulled away under green and cruised home for the win.  Brandon Smith, Eddie Sites, Rodney Moran, and  Shawn Bruce completed the top five.

In the 600 Sprint feature, Garrett Bard jumped from his third starting spot to the lead on the opening lap and went the distance to take the win.  Mickey Cilberto, Ivan Forney, Nate Hendrix, and Tim Lotz rounded ou the top five.

The 600 Sprint heat was won by Garrett Bard.

The 20-lap 4 Cylinder feature saw pole sitter Chris Woodard hold the top spot till Ray Hyer moved in to challenge, but contact between the pair damaged Hyer’s car, sending him pitside.  A yellow for Scott Lehman Jr’s crash on the fronstretch on lap 14 put Dante Mancuso on Woodard’s back bumper for the restart.  Mancuso tired to grab the lead, but Woodard was too strong and pulled away for the win as Mancuso’s car failed on the last lap.  Chris Bonoffski, Justin LaDuc, Tim Bush, and Quinn Wallis rounded out the top five.

The remainder of the Outlaw Speedway Fall Nationals, presented by Tioga Downs Casino, will be headlined by features for the World Of Outlaws Craftsman Late Model Series, Hooiser Tire Crate Sportsman, and Street Stocks, plus a full show for the 4 Cylinders and Marion Decker Agency Hobby Stocks.  Hot laps will begin at 5:30 p.m. with racing starting at 6:00 p.m.  Rainchecks from Friday night will be honored for Sunday’s event.  For more information, visit