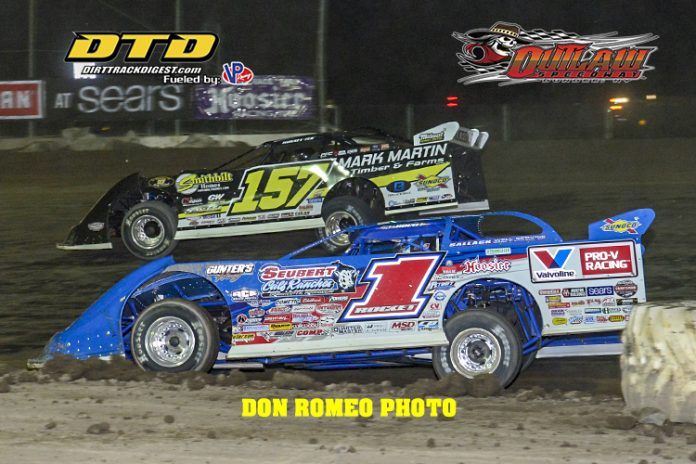 DUNDEE, NY – Brandon Sheppard rocketed to the World of Outlaws win at Outlaw Speedway, holding off the charges of Devin Moran and Mike Marlar.

Shane Clanton and Mike Marlar went to battle early in the 50-lap feature, swapping the lead a number of times in the opening laps before Clanton took firm command. Brandon Sheppard slipped by Marlar for second with five laps in, just before points leader Chris Madden slowed with his left front wheel barely hanging on to his car. That sent Madden pitside, and while he did return later in the event, he could only climb up to 19th in the final rundown.

Marlar had excellent short run speed, darting from third to first on the restart. Sheppard worked past Clanton and back into second on lap 13, but a run-in with a lapped car sent Sheppard airborne and momentarily back to third. However, Sheppard was on a mission, passing Clanton again and quickly erasing Marlar’s lead. On lap 19, Sheppard got a great launch off the bottom of turn four to grab the lead from the high-flying Marlar.

As the laps ticked away, Sheppard slowly extended his lead. By lap 30, the gap between the top two had grown to nearly two seconds, with Sheppard not wanting to slow down any time soon. Unfortunately, Sheppard had to slow as the caution waived with 33 laps completed, letting Marlar and Clanton close in again.


On the restart, Marlar’s short run speed showed again, rocketing to the top of the track and drawing even with Sheppard. The pair swapped the lead nearly every straightaway, with Marlar officially scored the leader on lap 36. At that point, Marlar began to fade, and Sheppard pulled away once more. Meanwhile, Marlar was now under fire from Devin Moran, who had climbed from outside the top ten up to third.

With ten to go, Sheppard seemed on route to another win, but Brent Larson slowed for another yellow. While Sheppard got a great launch when racing resumed, Marlar wasn’t going down without a fight. With five to go, Marlar had closed the gap to within a car length, but that’s as close as anyone could get. Over the final circuits, Sheppard put the throttle down and charged to his 12th World of Outlaws win of the season. Devin Moran claimed second with a last lap slider, while Mike Marlar finished third. Shane Clanton crossed in fourth, while Tyler Erb rounded out the top five.

With Sheppard’s win and Madden’s misfortune, the points race has tightened significantly. Marlar now leads Madden by four points, with defending champion Sheppard just 40 markets back. The series heads to Atomic Speedway in Ohio before their final two stops at the World Finals in Charlotte.

“Every time we get close to the points lead, something happens to us and we fall back,” Sheppard stated. “At this point, all we’re worried about is getting wins and keeping the Rocket 1 car up front. We’ve been fast, we’ve had a good car all year, but a little bit of bad luck. This car is a dream to drive, I wish we could race every day of the week.”

Devin Moran started eighth on the field, but lost spots at the drop of the green. After bouncing around outside of the top ten, “The Mailman” found his groove up high and was the fastest car on the track for the middle portion of the event.

“Thank you to the racetrack,” Moran said. “This is actually one of the best surfaces we’ve been on all year. It cleaned up a little bit and man, we could race all over. Mike and Brandon were side by side, and I couldn’t really do anything because the middle was so slick. It was a lot of fun.

Mike Marlar led a number of laps throughout the event, nearly grabbing the lead from Sheppard late in the going. However, Marlar ended up on the bottom step of the podium.

“I was racing my heart out there with Brandon and Devin,” said Marlar. “It was an awesome racetrack, but I went with a little different tire combination than most. I didn’t realize that until I was out there, so I would be good for a little while and then I’d fade.”

Brandon Butler took off at the start of the 30-lap Sportsman affair, dominating the first half of the event. While Butler was on cruise control, a number of fast cars were working their way to the front of the field. On a mid-race restart, Steve Gray drove past Butler and into the lead, then walking away from the rest of the pack. Over the back half of the event, Gray went unchallenged and drove to the $1,500 victory.

Kurt Stebbins held off a whole host of challengers to grab the Street Stock win and a guaranteed starting spot in their 100-lap finale next month. Ray Hyde and Marc Minutolo claimed victory in the 4-cylinder and Hobby Stock mains, two classes added to the postponed Sunday card.