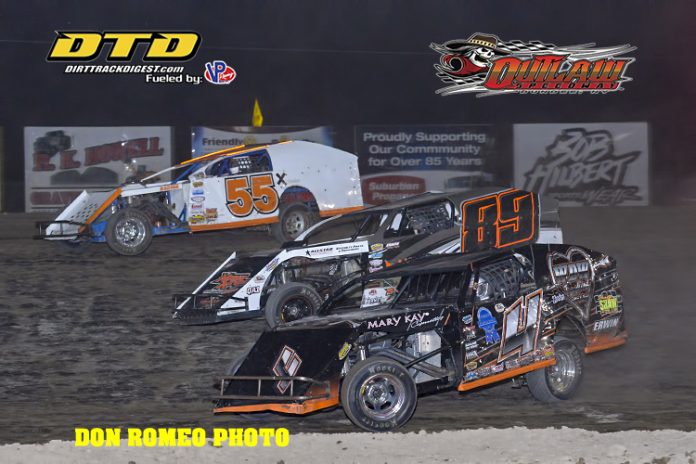 DUNDEE, NY – When Outlaw Speedway track owner, Tyler Siri put the 3rd Annual Dutch Hoag Triple 7’s weekend schedule of events together for October 19 and 20, 2018 he did not overlook his track regular classes. Sure, the Friendly Chrysler, Dodge Jeep, Ram Modifieds along with the 360 Sprints and the 602 Crate Sportsman will get most of the attention over the two nights of action, but there are still a bunch of other classes that will be competing for some pretty big dollars and lap money over the weekend of race action.

The classy Street Stocks will run a special 15 lap Dash on Friday night where the top two finishers will be locked into Saturday’s Empire 100 laying $2,000 to win and lap money will be paid for all 100 laps. The IMCA Modifieds will compete on both nights with Friday’s feature event paying a cool $750 then they return on Saturday racing for a winner’s share of $1,000. The Decker Farmers Insurance Hobby Stocks will race under Outlaw Speedway rules on Friday with the winner picking up $500 with lap money being paid for all 30 laps of their feature event. Saturday the popular Hobby Stocks will return using open rules and again racing for $500 to win the feature go. Likewise for the Mighty 4 Cylinders as they will run a 30 lap feature on Friday paying $750 to win using Outlaw Speedway rules and like the Hobby Stocks the 4 cylinders will also receive lap money for all 30 laps of their feature event. On Saturday the 4 cylinder brigade will return using open rules and racing for $700 to win.

Also on the Saturday card of events the Doug Gross Construction Crate Late Models will race for a winner’s share of $1,500 to win and the 600 Sprints will also be in competition on Saturday paying $600 to the winner. Both the Crate Late’s and the 600 Sprints are only scheduled for Saturday night, however any competitors that would like are eligible to come on Friday night and take advantage of hot lap activities and get a preferred parking pit spot for Saturdays action.

“When we put this 2 night schedule together we take into consideration that we have several classes that support Outlaw Speedway week in and week out. We want to make sure that classes like the Crate Late Models, Street Stocks, IMCA Modifieds, 4 Cylinders and Hobby Stocks are also included and racing for some serious money. The men and women that compete in these classes work just as hard as the Modified, Sprint and Crate Sportsman Divisions. They deserve to race for some big bucks and in many of the classes, lap money. I have a great staff that has taken upon themselves to go out and solicited lap money for the Street, Hobby and 4 Cylinders and we couldn’t do it without their help. This is a great way to end the season for many of these classes by running for some serious money.” That according to track owner, Tyler Siri.

Even though the 600 sprints are not a regular class at Outlaw they are included into the Saturday portion of the 2 day affair. Last year they produced some real good car counts with excellent competition, thus their return engagement in 2018 as part of Dutch Hoag Triple 7’s weekend.

Due to the large influx of race teams, racers are encouraged to get to the facility as early as possible for both nights as the pit area is going to an extremely busy place with lots of the big stacker trailers as well as plenty of other enclosed haulers making pit parking a real challenge. Pit entry gates will open early on both days of Dutch Hoag Weekend to allow haulers ample time to get in and secure a spot. Last year haulers were parked everywhere due to the fact there were closed to 500 different cars in competition over the 2 day affair. Rigs were stationed in the pits, parked along pit entry roads and track exit roadways. Some smaller units were put into the infield in an attempt to get everyone in the facility. It is anticipated that the 2018 version of Dutch Hoag Weekend will have as much or more interest than that of 2017 so everyone needs to make their plans early to attend.

Camping is free all weekend and that is the best option for race fans as once there they don’t have to leave the facility. Come Thursday or Friday and stay till Sunday. It will be a quick turnover from Friday night action as after the last checkered is waved for the night track owner, Tyler Siri and his team of professional track preparation experts, the Povoski Brothers will then take to the 4/10 of a mile clay oval and spend most of the night into the early morning hours grooming the track for Saturday’s finale where racing begins at 1:00 pm. So for the track prep crew it will definitely be a sleepless night as they ready things for some 350 laps of feature action alone in the 9 classes that will compete on Saturday.

All gate times along with ticket prices for both nights can be found on the tracks web site and Facebook account. Free rides on the Outlaw Speedway Monster Truck, “Outlaw Crusher” will be available both nights as well as another one of the tracks mouthwatering chicken bar-b-ques.

The Outlaw Speedway is located right in the heart of the Finger Lakes Region of Upstate New York just a short drive from Penn Yan, Bath/Hammondsport, Watkins Glen, Geneva as well as the Corning/Elmira area.