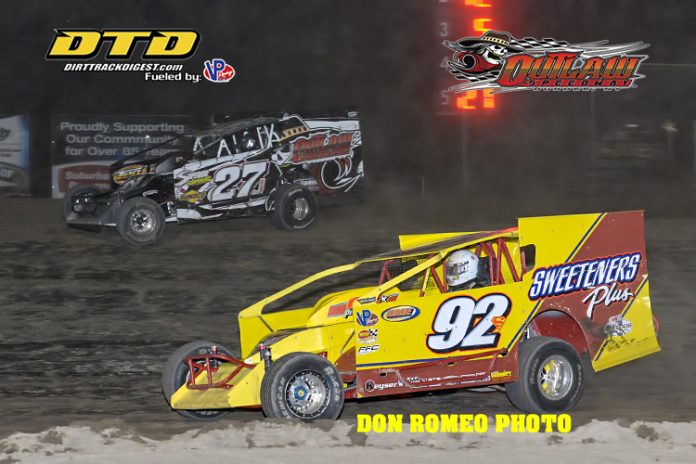 DUNDEE, NY – With persistent on again off again rain showers and sleet putting the kibosh to the 2nd and final day of the 3rd Annual Dutch Hoag Memorial event on Saturday, October 20, the event will now be staged on Saturday, November 10, 2018. It has been well documented that the track preparation crew and the ownership of the facility tried everything possible to get the show into the books on the advertised date, but as she has on numerous occasions during the “18” season, Mother Nature just didn’t want to cooperate thus the make-up. With several of the drivers in attendance that were to compete on the day of the rainout already prepared to make the long trek south to the Charlotte Motor Speedway Dirt Track in Charlotte, NC for both Crate Sportsman and Modified action it was decided to reschedule the event to the November date.

“The track prep crew gave it everything they had to try and make the racing surface race able, but the persistent showers and even sleet made it virtually impossible to get the show into the books on the originally schedule date of October 20. More rain, sleet and even snow showers were in the forecast for later into the evening and the following day. With everything else going on at Charlotte the next two weekends for a lot of our drivers we had to look past that and thus the Nov. 10 make-up. In the past we have seen some absolutely beautiful fall weather into the month of November and it isn’t the first time that this track or other northeast venues have had to roll the dice on November shows. With the early start time of 1:00 pm we will get this show run off as quickly as possible and have everyone out at a reasonable time.”

That according to track owner/promoter, Tyler Siri.

On the day of the rainout some 201 cars had checked in for the eight classes of competition that were to be run and hopefully all and even more will make the return engagement on November 10, 2018.

“Actually we were up against Eastern States Weekend on our original Dutch Hoag dates, stated Siri. We had a pretty good number of Modified and Sportsman teams in our pits on Friday and Saturday. Who knows with no other tracks in the entire northeast running on Nov. 10 we have the potential of having even more cars in all the classes. Time will tell.”

With big winners check and huge purse structures for all the classes that will see competition it is a sure bet that everyone will return for the some 350 laps of feature action.

All rain check’s and wrist bands from the October 20 cancellation will be honored on the November 10 make-up date.

Once again a mouthwatering Chicken BBQ will available at the main concession stand.
The Empire 100 for the classy Street Stocks will find Kurt Stebbins, Glen Whritenour and Jared Dennis all locked into guaranteed spots at the front of the field and all 100 laps are sponsored for lap money.

Along with the Street Stocks and Friendly Chrysler Dodge, Jeep, Ram Modifieds there will also be full qualifying events for the Outlaw Speedway American Racer Tire Crate Sportsman, the Doug Gross Construction Crate Late Models, as well as the Decker Farmers Insurance IMCA Modifieds and Hobby Stocks along with the 4 Cylinders and 600 Micro Sprints.