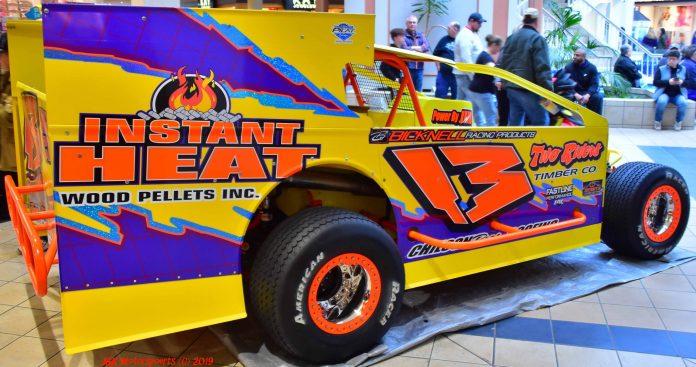 DUNDEE, NY –  For the 4th straight year the Arnot Mall is Big Flats, NY was the setting for the Annual Outlaw Speedway Car Show presented by Lanes Yamaha. Thousands of curious onlookers filed thru the massive Arnot Mall facility over the two day affair with cars rolling in late on Friday, March 29 and the show going Saturday and Sunday March 30 and 31.

Saturday was the more aggressive of the two day’s with both the Dew Pro Excavating Driver Autograph Session along with the Goodrich Auto Works and Goody’s Graphics Tire Changing Competition.

Numerous regular weekly competitors made themselves available for the Dew Pro Excavating Autograph Session including current Friendly CDJR Modified competitor, “The Doctor”, Danny Johnson. Johnson was on hand throughout the entire day mingling with a host of race fans, track employees, sponsors and other drivers.

The Goodrich Auto Works and Goody’s Graphics Tire Changing Competition lived up to all the hype and laughter as some 14; two person teams slugged it out with round one cutting the field in half. The second round saw four more teams eliminated from competition with just three twosomes looking to win the unique, one of a kina trophies provided by Goodrich Auto Works. When it was all said and done the team of Outlaw Speedway Pit Stewart, Tommy Curtis and driver, Danny Johnson walked away with the first place hardware beating out the father/son duo of Ajay and Ajay Potrzebowski.


Chad Gerych, proud employee of Goodrich Auto Works and Goody’s Graphics was there to witness the tire changing event and hand out the trophies and plaques to the winners and runners up.

Track Announce personalities, Mel Thomas and Kenny Shupp Jr. were on hand to make the call for the tire changing action.

On the floors of the Arnot Mall a multitude of various race teams proudly displayed their equipment representing virtually every class that races weekly at Outlaw Speedway.
Track owner, Tyler Siri and his partner, Jordan Lynch were at the Outlaw Speedway display table handing out 2019 track schedule’s, greeting the masses and answering questions relevant to the upcoming season and Mel Thomas of Thomas Video Productions was set up at Center Court with two large screen televisions promoting not only his company but displaying various races at Outlaw Speedway from the past year.

Representatives of the Arnot Mall Facility were very well pleased with the large orderly crowd that was in attendance and plans are already underway for next year’s event.

With the annual car show event now safely tucked away it is time for everyone to shift their focus to the opening two weekends in April. On Friday April 5 and 12 the track will be made available for open practice sessions. Gates for both dates swing at 4:30 with the track open for practice at 7:00 PM. All cars will be granted ample track time to shake down their mounts for the upcoming Dutch Hoag Memorial make-up on Saturday, April 13.

Gate and start times along with all admission prices and all classes of competition for the Hoag Triple 7’s Saturday event will be posted on the tracks Facebook as the date of the event draws near.

For more information about the track including the complete 2019 schedule of events, track contacts, rules, sponsor information, class rules and much more simply click on at www.outlawspeedwayllc.com or check us out on Facebook.