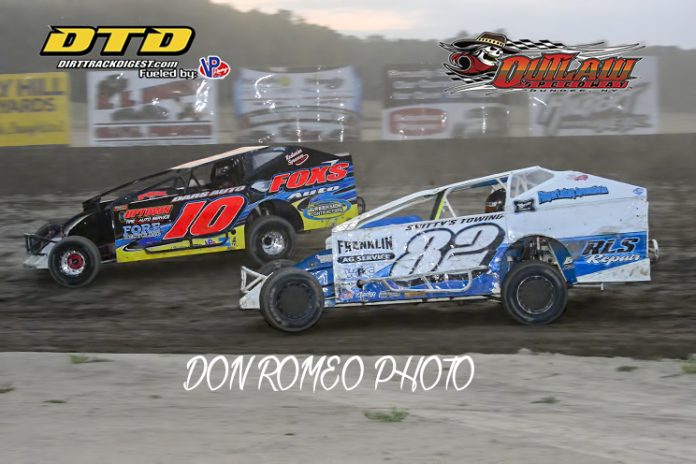 DUNDEE, NY – Night one of the A. Verdi Storage Containers Summer Nationals at the Outlaw Speedway was originally scheduled for just practice, but do to numerous rainouts thus far in 2019 the track management decided to use the opportunity to make-up four features that were washed out earlier in the season as part of the Short Track Super Series night on June 19.

Karl Comfort of nearby Penn Yan, NY has struggled for over a year trying to find the magic that put him into the 2017 Sunrise Insulation American Racer Crate Sportsman Track Championship.  On numerous occasions the veteran driver has had the combination to win, but unforeseen problems always seemed to get between him and victory lane.  However, on this night Comfort was not to be denied as he took full opportunity of his pole position starting spot and led the entire 30 lap distance to claim the $1500 event and it couldn’t have come at a better time as it was also part of the Outlaw American Racer Tire Series.   Will Shields has visited victory lane numerous times thus far in 2019 in both the American Racer and Hoosier Tire Sportsman Classes and gave Comfort fits throughout the entire second half of the feature, but came up a few car lengths short at the end and had to settle for second place.  Last year’s Series Champion, Dave Marcuccelli once again showed his liking of the fast 4/10 of a mile clay oval and finished third followed across the line by Brandon Butler with Tommy Collins Jr. wrapping up the top five.

In the Stan’s No Tubes Street Stock make-up feature Dylan Cecce and Glen Whritenour, who have been locked in a torrid battle all season long both took turns leading the 25 lap feature.  However, mechanical problems knocked Cecce out as he led the opening five laps and later Whritenour succumbed to a flat right rear tire after leading at the half way mark.  A pair of young guns in Jimmy Grant and Jake Karlnoski then took over the top two spots and for the next ten laps had the fans on the edge of their seats as the duo put on a tremendous battle for the lead.  A lap twenty caution put CJ Guererri right on the rear bumper of the race leaders and from there it became a three car race for the win.  Karlnoski got by Grant with two to go and was able to hold on for his first feature in of the “19” season.  Guererri just nipped Grant at the line to claim second with the two racing hard so the checkered flag that Grant shot off the top of turn one clobbering the foam barrier and doing heavy damage to his car.  Tracy Dunn, piloting the Jared Hill back-up machine put on a steady performance to claim fourth chased across the line by Gene Balmer who started twentieth on the grid.  Third generation driver, Jake Karlnoski started in the eight row on route to his win.

Quinn Sutherland picked up the checkered flag in the Last Chance Qualifying Heat.

In the 4 Cylinder Class, Adam Austin made it seven straight wins as he cruised to victory lane.  With only a few cautions to slow the twenty lap affair, the second generation pilot was in command from the drop of the opening green flag as he went on the take the popular win, but the real battle was for second place as the father/son duo of Scott Lehman Sr. and Jr. were the show as the two ran side by side the entire distance with pops (Lehman Sr.) holding off his son (Lehman Jr.) as the two claimed second and third respectfully.  Jeremy Bunn continues to be a picture of consistency as he claimed the fourth position at the finish followed by Ray Hyer who rounded the top five.  With the win Adam Austin has now put his name in the record books with such other greats in the class as Tommy Stewart and the Povoski Brothers who had dominating performances in the division.

The Last Chance Heat Event in the 4 Cylinders was claimed by Pete Johnson.

Also as part of the show the Friendly Chrysler, Dodge, Jeep, Ram Modifieds ran a special fifteen lap dash where the top two finishers  would automatically lock down the front row for the Saturday night $3,000 to win feature.  Some 7 machines took to the speedway and it was Derrick Podsaidlo claiming the win over Eldon Payne Jr. as the two are now secure for the Saturday finale.

The Marion Decker Insurance Hobby Stock Class sent a dozen competitors to the post for their twenty lap feature and for the second time in 2019, Frank “Bubba” Burnell found his way to the Outlaw Speedway victory lane leading the entire event in a brand new machine.  He was pressured throughout most of the event by Justin Eldredge, but was able to stretch the lead at the end and came home with the win.  Eldredge brought his ride home for second place followed across the line by Casey Wagner and Marc Minutolo and as the two crossed the finish line got together sending Wagner off on the hook.  Jamie Eldredge rounded out the top five.

Eric Williams nailed the win in the Last Chance Heat.

Congratulations to all the competitors.

All gate times and admission prices can be found by going to www.Facebook.com/OutlawSpeedwayLLC/.