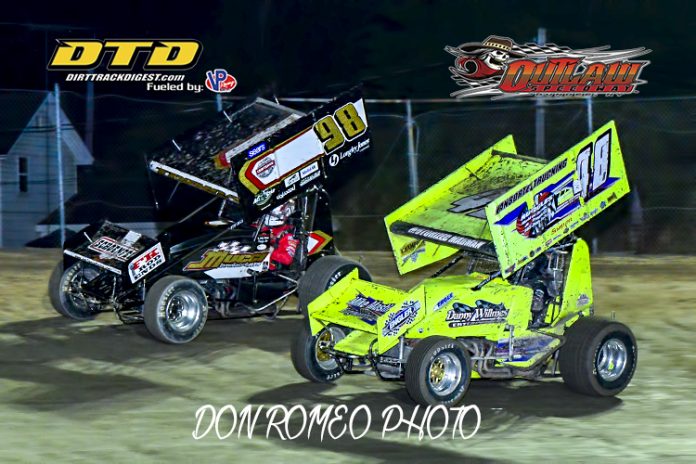 DUNDEE, NY –  After several podium finishes throughout his career, Joe Trenca was finally able to get it done for his first career Patriot Sprint Tour A-Main win over Jordan Thomas and Jonathan Preston.

Trenca would lead all 25 laps and when it was all said and done, victory lane was packed with a lot of happy Trenca and Mucci family members.

“We have tried so hard and I have let the guys down a lot over the years” an emotional Trenca stated in victory lane. “I was actually happy for those cautions because the lap traffic was really tough but I felt good, I felt like I ran a really good race, although we probably should have won one of these things a long time ago, we got it done tonight.”

Trenca was fortunate to draw the outside pole and would start the 19 car field along side Darryl Ruggles. Trenca used the high line to his advantage to grab the early race lead. Ruggles would slide into the runner up but it was not long before fourth place starter Jordan Thomas would get by Ruggles for the two spot.

There would be multiple re-starts throughout the event and all of them were timed perfectly by Trenca as he would start low in four and shift up the high side to protect the high-flying Thomas entering turns one and two.

The gap would always come to a close when lap traffic would be encountered for Trenca and that is when Thomas would attempt to take over. However, Trenca was just too strong in clean air and was able to keep himself separated from the rest of the field.

With two laps remaining, Thomas had an opportunity entering turns one and two to pull along side Trenca but just could not clear him entering three and four. Trenca would go on to win his first ever A-Main over Jordan Thomas who had to settle for another podium finish for the second consecutive week. Jonathan Preston, who won in a non-sanctioned PST race earlier in the year would come home third, followed by Jared Zimbardi and Kyle Drum completing the top five.

Trenca was extremely emotional in victory lane and gave credit to everyone who supports his program week in and week out.

“I have to thank everyone in the pits tonight; all our family and friends, this one is awesome ” Trenca continued. “We just go back our Don Ott engine this week and everything was awesome on the restarts, couldn’t have been better.”

For Jordan Thomas, he continues to find himself on the podium for the third consecutive time.

“We are really finding our stride the last six races” Thomas commented. “The race track went from one extreme to another tonight but it was a good track. I just could not get it rolling on the starts and my motor was stumbling, I felt I had a better car maneuvering through the lap traffic but another caution would come out and hurt us.”

Jonathan Preston would finish on the podium and was happy to go forward after starting sixth.

“Cant complain at all, we got a heat win” Preston acknowledged “You just have to start up front, these guys are so competitive and we are all so close, its really tough when you have a lock down track like this.”

The tour now ventures for its only time in 2019 as they will be visiting Michaels Mercer Raceway on Saturday August 10 and Eriez Speedway on August 11.