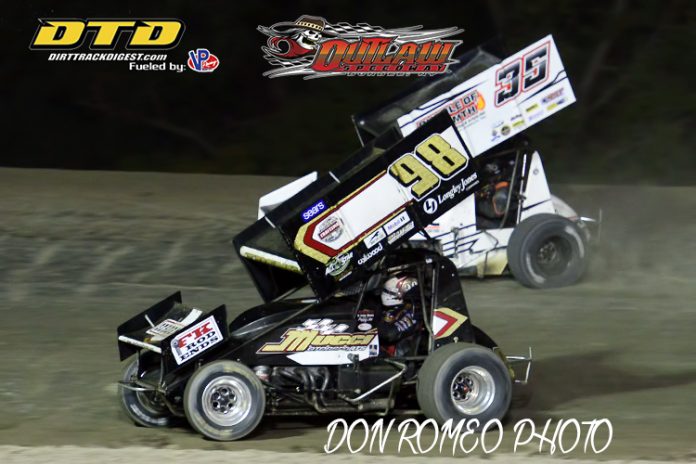 DUNDEE, NY – Joe Trenca took full advantage of his pole position starting position in winning the 30 lap feature and the $5000 that went along with it as 360 Sprint Champion of the 4th Annual Outlaw Speedway Fall Nationals.

By virtue of picking up the Dash win the previous night, Trenca and Jared Zimbardi brought the 24 car field to the opening green flag. Only two yellow flags slowed the pace with the first coming on lap ten and the second and final caution on lap thirteen and in both cases Trenca was not going to be denied a victory in the prestigious Fall Nationals event.

From the opening green and after each restart Trenca was able to open up a comfortable advantage over Zimbardi as both Davey Franek who started ninth on the grid and Paulie Colagiovanni who lined up in fifth were making their move to the front. Zimbardi, who has had an obvious love affair with Outlaw Speedway over the years winning numerous A Main events along with continual top five finishes had nothing for Trenca and as the laps were winding down had to fight off the challenge of Colagiovanni who was able to get around the Bradford, Pa speedster and set sail for the high flying Trenca.

However, without the help of any additional yellow flags to tighten up the field it was too much of a margin to make up and as they crossed the finish line to complete the 30 lap feature Joe Trenca held a comfortable second and a half advantage as Colagiovanni had to settle for a well-deserved runner up finish. Zimbardi was able to hold on for third at the end chased across the line by Franek and Matt Farnham who rounded out the top five.

32 Sprints were on hand requiring four qualifying heats which were won by Jordan Thomas, Steve Doell, Matt Farnham and Derek Locke. Denny Peebles won the B-Main as Farnham picked up the Dash victory.

The Patriot Sprint Tour will be headed to Fonda Speedway this Friday night for the make up feature of the Earl Halaquist Memorial which is a make up from a May 25 rain-out, paying $3,000 to win. This will also be the final full point event of the season in which we will crown our 2019 PST Series Champion. There will then be regular $3,000 to win, $300 to start event totaling in two features for the fans of Fonda Speedway.

The A-Verdi Storage Containers Patriot Sprint Tour will be back at Outlaw Speedway as part of the 4th Annual Dutch Hoag Weekend in October for a $3000 to win event. It will be an unsanctioned event.