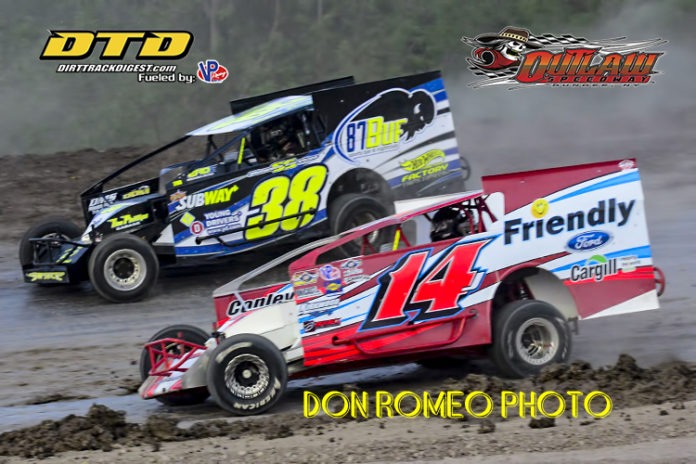 DUNDEE, NY – The engines fired up once again at Outlaw Speedway for their season-opening event. After an extended off-season, competitors were chomping at the bit to finally get back on track.

Alan Johnson, the experienced driver out of Middlesex, N.Y., took the checkered flag in the Modified division, grabbing his first win of the 2020 season.  It marks his 46th consecutive year with a feature victory.

In the 30-lap Modified feature event, Erick Rudolph led the field to green with Alan Johnson on his outside followed by Ron Cartwright Jr.  Rudolph quickly jumped out front with Johnson not too far behind. Rudolph and Johnson began to lap the competitors when a caution was thrown on lap nine.

Matt Sheppard snuck his way up into fourth place just in time for the restart. Rudolph and Johnson led the field to green again, but this time Johnson was able to jump out front where he would remain for the rest of the race.

Sheppard fought hard to chase him down through lap traffic but just could not make it stick.

“On a typical opening day, you have your usual springtime conditions with more moisture in the track, but tonight it was just as dry as it could be,” Johnson stated when asked about how late-season opening track conditions compared to those of early spring.

Discussing the advantage the drivers have who have competed down south already in 2020 over the drivers who have not, the seasoned veteran stressed “seat time is seat time, and it always helps to get an extra lap in.”

With no fans, the victory lane celebration was kept to a minimum with only Johnson and his crew present.

When asked if the lack of fans changed anything for his night, Johnson responded “I didn’t really think about it until we went over to victory lane and there was no one there. You have to have fans.”

New York State is hopeful to return to “normal” soon where fans can once again pack the grandstands.

2019 DIRTcar Hoosier Tire Sportsman Track Champion, Will Shields picked up right where he left off last season by winning the opening night feature as he beat a solid field of some twenty-one entries.  Shields started on the pole, led the first five laps until giving way to third generation young gun, Alex Payne who took over the lead and looked poised to claim the victory.  However, Lap thirteen was very unlucky for Payne as his motor expired in a cloud of smoke taking away a sure victory.  With that Shields again assumed the lead and covered the field over the remaining dozen circuits to pick up his first win of the 2020 season.  Zach Sobotka started sixth on the grid and put on a solid run to claim the runner up position while AJ Lloyd finished out the top three podium positions.  Travis Grover claimed fourth at the finish chased across the line by Tim Guild who rounded the top five.  Also, of note was the sixth-place finishing Tommy Paine, second oldest son of the Hurricane, Steve Paine.  In his first outing as a Rookie, Paine began the feature event inside row two, drove an exceptionally smooth race and completed all twenty-five laps to claim sixth.  Like his older brother, Billy who competes in the American Racer Tire Sportsman Division, Tommy Paine too looks to have a very promising future.

In the Sunrise Insulation American Racer Tire Sportsman Division, it was journeyman driver, Ajay Potrzebowski picking up the popular win and for the Horseheads, NY native.  Having spent most of his career traveling across the Twin Tiers of New York and Pennsylvania, Ajay Potrzeboswki has become a household name and it came as no surprise when he picked up the “W”.  Having the luck of the redraw on his side, Potrzebowski pulled the pole position for the twenty-five-lap feature and cruised to the win.  Zach Sobotka made it two runners up finishes on the night as he once again claimed second in the American Racer shot class as Ted Morseman rounded the top three podium finishers.  Former Outlaw Speedway Track Champion, Chris Fisher was fourth while Kenny Peoples Jr. who started deep in the field in sixteenth position drove thru the field to claim fifth.

In the Stan’s No Tubes Street Stocks it turned out to be a classic battle between two heavy weights in the division.  Quinn Sutherland back once again in the seat of the Schuyler Family Racing 57j and CJ Guererri put on the show of the night as the two beat and banged and slugged it out over the entire twenty lap distance to see who would be the victor.  With neither driver giving an inch and with aggressive racing thru lap traffic, Sutherland was able to hold off Guererri for the win.  Two-time Track Champion, Glen Whritenour started tenth on the grid and put on a steady drive to claim third at the checkered chased across the line by Aksel Jensen and Gene Balmer.  John Carpenter may have had the car to challenge both Sutherland and Guererri as he had caught up to the leaders and looked poised to pass both for the win, however a late race miscue heading into turn one cost Carpenter a trip over the banking and out of contention.

The IMCA Modifieds put on their usual smooth feature performance with 2018 Outlaw Speedway Track Champ, Rodney Morgan finding the short way around the four tenths of a mile clay oval and claiming his first win of the year.  He was followed across the line by Bad Brad Smith, Nicole Spaulding, David Scouten claimed fourth as Rick Watt rounded the top five finishers.

In the companion IMCA Hobby Stock Division it was Wayne Ellison holding off a determined Justin Eldredge to pick up the victory.  Ellison started sixth on the opening green flag and passed a number of very good competitors in winning his first feature of the year including two time and defending class champion, Marc Minutolo who finished third.  Jamie Eldredge and Bruce Kinner completed the top five.

Finishing up the crowded night of activity was the mighty 4 Cylinder Division as fourteen machines took the opening green flag for their twenty-lap feature.  Robert Doolittle, who has run well at Outlaw over the past year was finally able to secure a feature win as he claimed the popular victory.  Doolittle, who started outside pole was able to get to the point quickly and come away with the win as he was followed by many time feature winner, Ray Hyer who claimed second.  Rick Conte came home for third as he was chased across the line by Scott Lehman Jr. and his father, Scott Lehman.

The evening started with the running of the first Winner’s Circle Deli Youth Bandit feature event of the 2020 season as Ethan Decker claimed the win.

Coming up at Outlaw Speedway on Friday, June 12 it will be another Super Seven Show featuring the Friendly Chrysler, Dodge, Jeep, Ram Modifieds along with the Sunrise Insulation American Racer Sportsman and the Stan’s No Tubes Street Stocks.  Also seeing action will be the DIRTcar Hoosier Tire Sportsman, the IMCA Modifed and Hobby Stock Divisions as well as the 4 Cylinders and the Winner’s Circle Deli Bandits.

It is anticipated that there will again be NO grandstand seating due to Covid-19 regulations, everyone entering the pit area must wear a mask and observe social distancing and the event will again be PPV on Dirt Track Digest TV.  Please continue to follow along on the tracks Facebook account for any changes in scheduling that may arise.  Racing starts at 7:30 PM.  For more information simply go to www.Facebook.com/OutlawSpeedwayLLC/.

A complete list of the current points as well as other vital information can be found by logging in at www.outlawspeedwayllc.com.