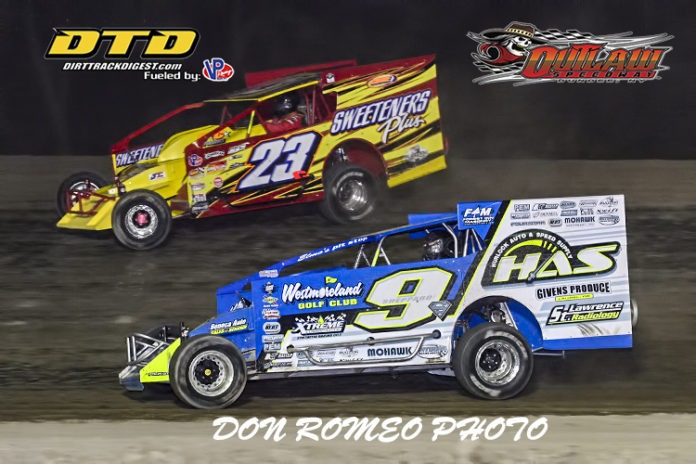 DUNDEE, NY – The empty grandstands are becoming a familiar sight as Outlaw Speedway marked its second week back in action without fans. It was an action-packed night with all seven classes running a regular show. In the Modified division, a fan favorite picked up his first 2020 season win in New York State

At the drop of the green flag, Kyle Coffey and Steve Paine made up the front row. The pair quickly walked away from the rest of the field, but were met with two early cautions on laps one and two. After the early race restart, Coffey extended his lead by several car lengths over Brady Fultz and Paine. As the race went on, Matt Sheppard, who started 12th, quickly worked his way up to the front of the field where he battled with Fultz for second place, eventually passing him and setting his sights on Coffey who was out front by a mile. As the laps clicked away, so did the distance between Coffey and Sheppard. With less than 10 to go, Sheppard put the pass on Coffey to take over first place, where he would remain for the rest of the night. This marked Sheppard’s first 2020 season win in New York State after previously picking up the win down in Louisiana during last month’s southern swing, and a win at Potomac on Sunday.

“We always seem to have bad luck when drawing for positions. We drew the worst for the heat and had the worst number for the feature, but we were able to get it to the front and claim that first feature win.” said Sheppard during his victory lane interview. When asked about how his trip down south impacted the start of his 2020 season, Sheppard stated “Everything we’re doing up here is a little bit of an evolution of what we did down south and I feel like we have a pretty decent package right now. The last few weeks we have been pretty darn good.”

As New York State begins to slowly enter into the next reopening stage, Outlaw Speedway, as well as other surrounding tracks, remain hopeful that the fans will be able to fill the grandstands once again sooner than later and life can return to normalcy once again.