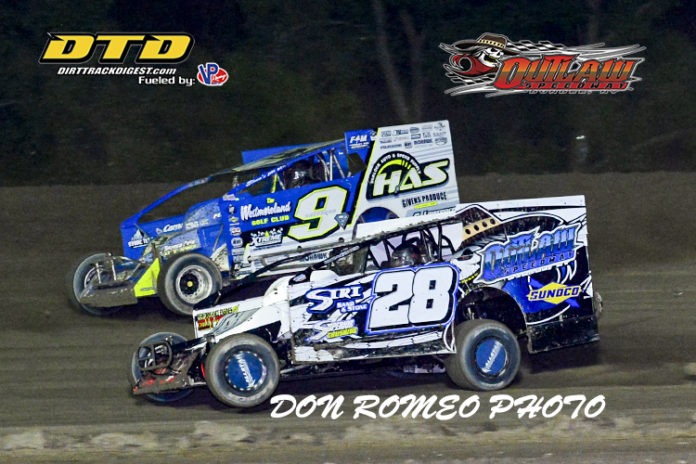 DUNDEE, NY – Despite the late afternoon thunderstorms, Outlaw Speedway was able to run their regularly scheduled “Super 7” show. After a delayed start to the evening with extra track preparations thanks to Mother Nature, the show was able to kick off and run smoothly with all seven divisions competing. Matt Sheppard picked up his second win in the Modified division at Outlaw Speedway for the 2020 season, making it a back-to-back sweep for the 9s machine.

Jordan Siri sat on the pole for the Modified feature event followed by Eldon Payne Jr., Greg Birosh, and Jim LaRock. As the green flag dropped, Jordan Siri bobbled going into turns three and four, which opened the door for Payne to quickly take over the lead. An early race caution on lap two bunched up the field once more and Payne was able to remain out front while Matt Sheppard quickly started working his way up to the front. Sheppard took the lead on lap 11 just in time for the second caution to come out. After the restart, Sheppard gained a generous lead over the rest of the field where he would remain for the rest of the race. Sheppard grabbed the checkered followed by Tyler Siri, Ron Cartwright Jr., Steve Paine, with Greg Birosh rounding out your top five.

“Man, that was awesome” Sheppard stated in yet another fanless victory lane celebration when asked about his second consecutive win. “The track was a lot more like a heat race tonight going into the feature,” Sheppard answered when asked about how the heavier and slicker track conditions played a role in tonight’s win. “Usually if your car is pretty good and pretty balanced, you usually don’t have to change much,” said Sheppard, “It was all about going out there and staying on the gas.”