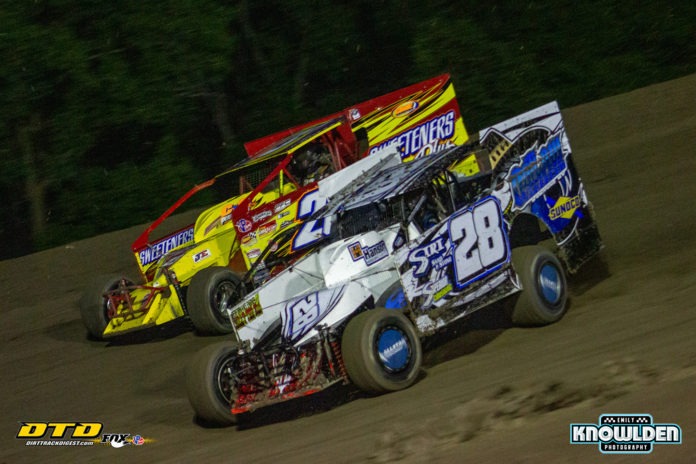 DUNDEE, NY – With the month of June now all but a distant memory, Outlaw Speedway owner, Tyler Siri and his girlfriend, Jordan Lynch are now shifting their attention to the July 2020 schedule.

Outlaw Speedway, along with virtually every other race venue in New York State completely lost the entire months of April and May due to the Covid-19 Pandemic.  As the Finger Lakes Region of New York, where Outlaw Speedway is located moves thru Phases 1, 2 and 3 the track now is readying for Phase 4 which can happen at any time depending on how the scientific date and numbers shake out, but it appears as though everything is on point for most venues like Outlaw to re-open with race fans.

For the past several weeks the popular Yates County oval has been open, but only to pit admission with no fans in the stands as per Governor Cuomo’s directive.  Thousands of others have stayed home and enjoyed televised broadcasts from the track on DIRT TRACK DIGEST TV.  This has worked out well for those that could not attend or did not want to view from the pit area.  For the most part the reviews have made the pay per view effort worthwhile and it keeps loyal fans in touch with the race action.

Entering July Siri and Lynch have some decisions to make as there are no less than two huge events on the horizon the first of which is the annual Fireworks Extravaganza tentatively set to go on Friday, July 3.  The other big event is the Annual Summer Nationals scheduled for Friday and Saturday, July 24 and 25.

With the track having lost numerous high profile events including the Lucas Nationals, the First Annual Cindy Lane Memorial Spring Nationals, the Brett Deyo Short Track Super Series, The Tony Stewart Ollies Outlets All Star Circuit of Champions 410 Sprint Car Series as well as the First Annual Gene Dupuy Memorial, all in the months of April, May and June due to the Coronavirus.  Some of those events “may” have a second chance should re-scheduling become an option; however, most are gone for the season.

According to track owner, Tyler Siri, “We have been at the mercy of Governor Cuomo and the NYS Health Department for months and continue to follow their guidance.  We understand the importance of following along with the protocol and to provide a safe environment for all our racers, fans and staff. Actually, we opened much earlier than we previously thought we would be able to and everyone that has been involved with the events we have run thus far have done a great job in keeping things safe.”

Siri is still not sure what will happen in the coming weeks.

“We can’t even begin to guess what is up next or when we fill be able to open the main gates for race fans.  We have been keeping things simple by just running Regular Super 7 Shows with no special events.  The pit attendance has been consistent and the pay per view has worked out very well, but for us to put on any high-profile event we need those butts in the bleachers.”

Rumors abound as to what directive Cuomo will go with entering the 4th and final Phase.

“Jordan and I are hearing all kinds of numbers flying around.  Everything from 25% to 100% capacity.  If we are limited to let us say 50% that will certainly help, but again if we can’t open with a larger capacity it will make a difference in what kind of program we run.”

It will also be difficult in policing the 6’ social distancing protocol when fans are allowed back into the grandstand seating area, however there Is ample seating area the entire front straight away and if need be there are other options to get people in the facility.

“The track needs to play by the book.  We have permits to operate the facility that are issued by the State of New York and if we screw up it could potentially mean loss of our liquor or health department certificates which would shut us down.  This has already happened across the state in other private sector businesses and we don’t want it happening at Outlaw Speedway.”

With all this in mind the track will continue to take baby steps for the foreseeable future and take it one week at a time.

“That’s still about all we can do at this point.  If I could look into a crystal ball and predict what will happen over the next month, we could plan and go with it, but there is still a lot of uncertainty as we move forward.”

Siri and Lynch do have a well thought plan in effect when the track can re-open to race fans.  The staff members that work on the main grandstand side of the facility have been on alert that they could be called to work on a day’s notice.  The track has been stockpiling food and other supplies and several food and beverage vendors are onboard with the fact that they could receive a call on Thursday to make deliveries on Friday.

“We have been in constant communication with our suppliers and they totally understand the situation that we are dealing with.  It could very well be an eleventh-hour decision to open for fans and our vendors are ready to roll whenever we say go.”

The same holds true with the Annual Fireworks Extravaganza scheduled for July 3.

“The pyrotechnic company we use for our fireworks program knows that we may decide the day before the event that we have the go ahead to re-open and we will still have fireworks as planned.  We are trying extremely hard to not leave any stones unturned so that when we get the go ahead from the state, we can swing the gates for fans.”

With all this in mind Tyler Siri and Jordan Lynch of the Outlaw Speedway will continue to race every Friday night for the duration focusing on their seven weekly classes plus the youth Bandit Division in hopes that the number of Coronavirus cases continues to drop and the remaining schedule can get back on track.

As news continues to unfold racers and fans are encouraged to keep an eye on the tracks Facebook account as developments will be posted as they happed.  Simply go to www.Facebook.com/OutlawSpeedwayLLC/.