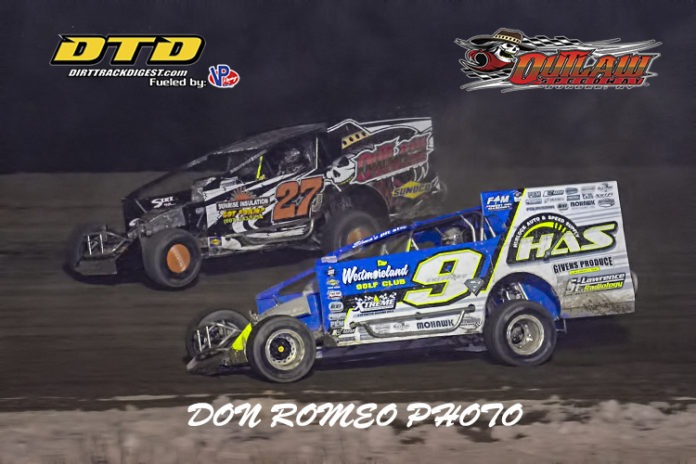 DUNDEE, NY – No matter what is thrown at him, Matt Sheppard keeps finding ways to win at Outlaw. For the second week in a row, Sheppard had to rebound from an early wreck to grab the win, coming out on top of a late battle with Danny Johnson.

Derrick Podsiadlo led a calamity-filled start of the 30-lap Modified feature, the most notable incident being a near half-field pileup on lap two. With a stopped car on the backstretch and the field two-wide, a number of cars were collected with Sheppard, Steve Paine, and others receiving slight damage, with Brady Fultz, Greg Birosh, and Kyle Coffey out of the event.

Once the field got some green flag action, the Siri teammates of Tyler Siri and Johnson went after Podsiadlo. While Johnson and Siri battled, they both closed in on the leader, with both Johnson and Siri sweeping by Podsiadlo on lap ten. With Johnson out front, eyes started to shift back in the field towards Sheppard, looking to repeat last week where he won after an early crash. By lap 12, Sheppard had clawed to fourth.

A halfway yellow reset the field, with Johnson leading Siri, Podsiadlo, and Sheppard at lap 15. Podsiadlo fell to Sheppard on the restart, with Sheppard driving under Siri on lap 17. Sheppard was alone on the bottom, with the rest of the frontrunners on the cushion.

Sheppard reached Johnson with 19 laps complete, but The Doctor held tough. The pair raced side-by-side for a few laps, but Sheppard stuck a nose in front on lap 23. Sheppard then cleared Johnson, but the lead wasn’t comfortable, with Johnson holding pace with Sheppard.

A yellow with four laps left gave Johnson a chance to regain his footing and take one last stab at the lead, but a flawless final set of laps by Sheppard was impossible to overcome. With the checkered waiving, it was Sheppard winning over Johnson, Justin Wright, Tyler Siri, and Jordan Siri.

The win was Sheppard’s fourth on the year, but despite the victory, Sheppard wasn’t entirely thrilled with the way the race went.

“Sometimes this place is dangerous, whether it be the cars stopped on track or the mud puddles everywhere,” Sheppard stated. “We were lucky to survive that one. We had a good night last night with a long drive home, and we had to do it the hard way two weeks in a row, but that shows how bad fast this car is. The right rear is flat, I could feel stuff in the suspension dragging, we just barely made it to the end.”

The Sunrise insulation American Racer Tire Crate Sportsman feature would be the best event of the night as a perfect green to checkered run in the twenty-five lap feature would find pole sitter, Ajay Potrzebowski leading throughout the entire distance in claiming his second feature win of 2020.  After winning on opening night, Potrzebowski has been shut out of victory lane, but on this night he proved to be way to strong as only the machine of Karl Comfort was able to mount any kind of a challenge for the race leader.  Comfort was able to show his car on the inside of Potrzebowski on only one occasion forcing him to grab and extra gear and drive away from the rest of the field.  At the checkered, in an event run off in record time it was Ajay Potrzebowski claiming the win with 2017 Track Champion, Comfort in second.  Alex Payne continues to impress racing in both Sportsman Divisions as he claimed the third and final podium spot.  Zach Sobotak, who like Payne does double duty in Crate Sportsman action came home for fourth at the finish as he was followed across the line by 2018 Track Champion, Chris Fisher.

In the companion Hoosier Tire Crate Sportsman Division, it was Zach Sobotka picking up his second win of the season after a hard-fought battle with Alex Payne.  For third generation pilot, Payne it appeared like he was well on his way to claiming his first win of the year in the class after his first feature win ever at Outlaw the week prior in American Racer Tire action, however a late race caution allowed Sobotka one last shot at the high flying Payne.  On the restart, Payne went right back to his customary position of pushing the cushion while Sobotka ran the bottom of the banking.  Coming for the double checkers, Sobotka would gain the momentum exiting thru four and in a drag race to the finish line would just nip Payne for the win and his second trip to victory lane after winning earlier in the season on June 12.  Following the pair across the line was third place Tommy Collins Jr., while Travis Grover and Zach George would round out the top five finishers with Payne, Sobotka and Grover all doing double duty each week in Crate Sportsman action.

Glen Whritenour made short work of the Stan’s No Tubes Street Stock feature event as the veteran competitor and two time Outlaw Speedway Track Champion would dispose of then race leader, Aksel Jensen on lap seven of the twenty lap feature and cruise to the victory.  An anxious moment on lap two would find front runner, Jared Hill getting turned into the front straight a way concrete collecting several other machines.  Hill along with CJ Guererri would go to the pits for quick repairs, restart at the back and charge back thru the field.  Two more quick caution flags on laps thirteen and nineteen would slow Whritenours pace, however he was the class of the field on the night and with the win made it two feature wins on the season.  Last weeks winner, Jake Karlnoski started in the sixth position, ran in the top five throughout and made a late race rally in tracking down Whritenour, however the third generation pilot would have to settle for second with Aksel Jensen putting on a steady drive to nail the third spot.  Jared Hill recovered nicely after the earlier event trip to the pits to claim fourth as first night competitor, Shawn Boyton rounded the top five.

Heat wins in the Stan’s No Tubes Street Stocks were picked up by Whritenour and Karlnoski.

“Bad Brad” Smith lived up to his name as he put a good old-fashioned butt kicking on the IMCA Modified feature field.  Coming into the event, 2018 Track Champion, Rodney Morgan was making the Outlaw Speedway his personal sand box, but on this night it was Brad Smith who would start sixth, make some nifty moves early on take the top spot away from Nichole Spaulding and drive away from the field.  Morgan, who had a perfect four wins in a row coming into the event would start right behind Bad Brad on the opening grid, but was unable to keep pace and late in the event experienced some mechanical problems relegating him to a sixth place finish.  Trey Palmer, making his first start of the year at Outlaw started the twenty lap feature in the fifth row, put on a steady drive, passed the second and third place machines of Nichole Spaulding and Kevin Smith late in the event and rode home for second.  Lady racer, Spaulding continues to impress in IMCA Modified action as she finished third followed across the line by Kevin Smith and Rick Watt.

In the companion IMCA Hobby Stock feature Marc Minutolo took full advantage of his outside pole position starting spot, jump into the lead, hold off a determined pack of hard chargers and pick up his second win of the 2020 campaign.  The two time and defending Hobby Stock Track Champion had the field covered from start to finish as he led all twenty laps, but the race that kept everyone’s attention was from second on back as first time competitor on the season, Jack Ayers, Jeremy Trank, Justin Eldredge and Bruce Kinner were the show.  With three- time feature winner, Wayne Ellison finding mechanical problems and loosing a couple laps he was out of the picture thus setting the stage for perhaps a new face to find victory lane.  However, Minutolo was the class of the field as he cruised to the win with Trank getting past Ayers late in the race to claim the runner-up spot.  For veteran driver, Ayers who has competed in numerous different classes at the Outlaw Speedway throughout his career it was a hard fought third place run as he was able to hold off Justin Eldredge and Bruce Kinner who completed the top five finishers.

The Mighty 4 Cylinders were the last feature on the night and Bob Doolittle used a power move at the drop of the opening green flag to move from third row starting position to gain the lead before the pack had even exited turn two.  From their Doolittle was not to be denied his second feature win of the season after an opening night victory as he led all twenty laps.  Shawn Bunn has been on a mission winning the last three feature events and once he cleared traffic set his sights on the high -flying Doolittle.  Bunn drew the ninth starting position and methodically worked his way past several quality machines before getting to the second spot and with still several laps remaining looked poised to make it four wins in a row.  But Doolittle had other plans and kicked his machine into overdrive and rode home for the win by a couple car lengths over Bunn.  The Lehman Father/Son duo were once again in full flight with son Scott Jr. taking the third spot in his Front Wheel Drive 4 Cylinder as he held off first time competitor, JJ Kriedler who came from tenth to finish fourth as he was able to hold off the elder Lehman Sr. who crossed the line in fifth.

The opening night feature event saw the Winner’s Circle Deli Bandits taking to the Outlaw Speedway and in dominating fashion, Blake Parsons was able to beat the undefeated Ethan Decker to claim his first feature win of the year.

Congratulations again to all competitors.

Coming up next Friday, July 10 at the Outlaw Speedway it will once again be a Super 7 Show featuring all the regular weekly classes. As of this writing unless something changes as per Governor Cuomo’s directive the grandstands will remain closed, however pit admission is available as well as Pay Per View on Dirt Track Digest.TV.

To stay abreast of the ever changing schedule of events simply follow along on www.Facebook.com/OutlawSpeedwayLLC/.

For a current listing of the points as well as all other valuable information pertaining to the track go to www.outlawspeedwayllc.com.