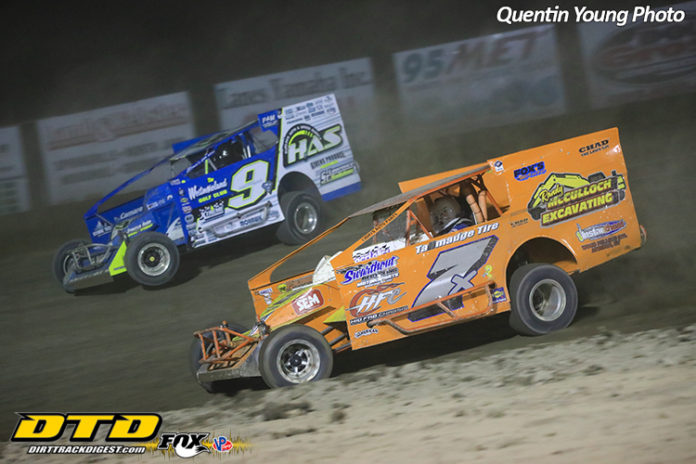 DUNDEE, NY –  Following a rather eventful Modified feature at Outlaw Speedway, it was Steve Paine stealing the checkered flag. Paine inherited the lead with a handful of laps remaining and stormed off to his first win of the year.

Kyle Coffey launched from third to first at the start of the 30-lap Modified feature, setting pace over Jim LaRock. Coffey went unchallenged through the first handful of laps, until a yellow on lap six re-racked the field. Justin Wright launched from fourth to the lead on the restart, blasting the top to pass everyone. Coffey held constant in second, but soon had to deal with Matt Sheppard, who reached third by lap nine.

A lap 13 yellow for Alan Johnson’s spin set another double file restart, with Paine nipping Sheppard for third before a yellow the next lap. On that restart, Erick Rudolph ended up backwards while fifth, claiming a bunch of cars. Following that caution, Paine fired well, sliding by Coffey for second and ready to strike on Wright.

Sheppard disposed of Coffey as well, looking to be in an excellent spot to snag another win. On lap 17, Sheppard tossed a slider on Paine, but the next time by, a small puff of white smoke came out of the #9s entering turn one. The result was Sheppard’s car having no rear brakes, sending him hard into the fence in the middle of turns one and two, out of the race. Now, it was set to be Wright versus Paine for the win.


With Wright up top, Paine ran a lane lower. While Paine held within a couple car lengths, he didn’t have the drive to complete the pass. Just as the leaders were ready to enter traffic with five laps left, the yellow waived once more.

Wright seemed to be in a good spot, up until the restart. With the right rear suspension collapsing on Wright’s car, Paine inherited the lead for one final restart. Coffey gave chase, but Paine never faltered in the final circuits, picking up his first win of the season in the 30-lapper. Coffey crossed in second, with Alan Johnson rebounding from his mid race spin for third. The Siri team cars of Danny Johnson and Tyler Siri had rough starts to their evenings, but claimed fourth and fifth at the checkered.

“We’ve been struggling some, mostly because of what they do with the track,” Paine said. “They’ve had it real fast all year, just too fast and too thin for our car, but tonight it was a little different and it came to us. I really think Justin Wright had the car to beat, but he had some real bad luck and we were able to take advantage of it.”

The first feature event of the night in the adult class was the Hoosier Tire Crate Sportsman make-up from last Friday’s partial rainout as 2019 Hoosier Tire Track Champion, Will Shields showed his mastery of the Outlaw Speedway by starting fifth, got to the point and would go on for his second feature win of 2020 in the division. Like several other Crate Sportsman competitors, Shields also does double duty in both divisions, the added track time certainly makes a big difference in his success. At the completion of the twenty- five lap make-up Travis Grover was credited with a nice runner-up finish as he was chased across the line by two -time 2020 feature winner, Zach Sobotka who was third. AJ Lloyd had another patented top five finish by claiming fourth while Tommy Collins Jr. who has also visited victory lane twice this season rounded out the top five.
In the Hoosier Tire Crate Sportsman regular feature it was third generation pilot, Alex Payne once again proving that he is most definitely a force to be contended with in either Crate Sportsman Division as he started the event ninth on the grid, mowed the field apart, got to the lead and never looked back in claiming his first win of 2020 on Hoosier Tires and thus ending the Shields, Collins, Sobotka stranglehold on victory lane. Payne was followed across the line by class rivals Tommy Collins Jr., Zach Sobotka with Tony Velez having his best run of the season thus far by finishing fourth while AJ Lloyd continued his strong season by rounding the top five.
Earlier evening heat wins were picked-up by Bryan Rhodes and Will Shields along with Tony Velez who nailed his first ever qualifying heat win.

In the Sunrise Insulation American Racer Tire Crate Sportsman Division Ajay Potrzebowski became the first three time feature winner in the class as he jumped out into the early lead from his second row starting spot and led all but one lap as on lap nineteen former class champion, Karl Comfort was able to nose ahead, but Potrzebowski was able to get back by on lap twenty and would go on to the win making it back to back feature victories after his opening night win on June 5. Comfort was able to hold on for second at the finish of the twenty-five-lap grind as he was followed across the line by Alex Payne who capped off a great night of racing. Doug Kline had by far his best run of the season as he rode home for fourth at the checkered flag while Kaiden Dgien rounded out the top five.

Glen Whritenour once again showed why he has become a master in the Stan’s No Tubes Street Stock Division as he claimed his third win of the season, however it did not come easy. After starting eighth on the opening green flag, GW had to make an unexpected quick trip to the pits on lap five, however on the ensuing restart he stormed thru the field and by lap nine was in front and would cruise to the win over CJ Guererri who was trying desperately to back up his June 12 feature win, but came up short on this night. John Carpenter has been a threat all season long to contend with Whritenour, but a rash of problems have kept him from challenging the top echelon in the class, but on this night Carpenter was able to put it all together and claim the third and final podium spot. Jake Karlnoski again had a strong car as he rode home for fourth while Jared Hill completed the top five. With his win, Whritenour has won three of the last four and looks poised to repeat his 2017 and 2018 Track Championships as the season is now well past the halfway mark with only some half dozen point races remaining.

Stan’s No Tubes heat wins were picked up by Whritenour and Carpenter.

In the IMCA Modified Division it was a new face in victory lane as Kevin Smith was able to put it all together in winning his first feature of the year. Smith, who has challenged to win on numerous occasions was able to put everything together in holding off perennial favorite and four-time feature winner, Rodney Morgan who claimed the runner up position. Like Kevin Smith, Bumps Scutt has also showed great speed all season and rode home for third at the completion of the twenty lap feature as he was chased across the line by one time 2020 feature winner, Brad Smith as Shawn Bruce completed the top five.

In the companion IMCA Hobby Stock feature it was yet another Wayne Ellison walk in the park as he continues to show his dominance in a class that is littered with good talent and equipment. For Ellison it was his fourth trip to victory lane this season as second place finisher, Marc Minutolo has been the only other driver to stop the high-flying Ellison as Minutolo has two feature wins thus far. Ellison began the feature in the third row as Minutolo was further back in row five. The two stormed thru the field and ran one/two throughout as Jeremy Trank continues to show great poise as he once again claimed a top five by finishing third at the checkered flag. Fourth row starter, Bruce Kinner made some good moves and came home for fourth as pole sitter, Jason Clugstone hung in the lead group all night and claimed fifth.

In the Mighty 4 Cylinder Division Scott Lehman Jr. was finally able to put a feature win in the record books as the second generation pilot started along side father, Scott Lehman in row four, took his potent Front Wheel Drive machine to the top of the banking, drove thru the field and came home with the win thus ending the Jeremy Bunn and Bob Doolittle dominance in the division. Lehman Jr. was chased across the finish line by Doolittle who came up just shy of his third feature win of the year as Rich Conte had his best run of the year by nailing down the third spot. Jason Smart led the field to the opening green, ran with the leaders all race long and came home to claim fourth while Scott Lehman rounded the top five, but it will be son Scott Jr. who has the bragging rights for this coming week.
Scott Lehman Jr. capped off a perfect night by also picking up a qualifying heat race win as

In the Winner’s Circle Deli Bandit Division it was yet another new young face visiting victory lane as first time competitor, Abbie Decker was able to take advantage of problems with the race leaders and come home with her first trip to victory lane in 2020.
Congratulations to all competitors.

With the ongoing Covid-19 Pandemic and the stringent New York State guidelines which are still in place restricting mass gatherings, the Outlaw Speedway has no other choice but to cancel next weeks 5th Annual Summer Nationals event which was to feature the first appearance of the Patriot 360 Sprint Tour. However, with no fans in the stands the track ownership will go with another Super 7 Show on Friday, July 24, 2020.

For updates leading into the event simply go to www.Facebook.com/OutlawSpeedwayLLC/.
For a current list of the points in all classes log on at www.outlawspeedwayllc.com.