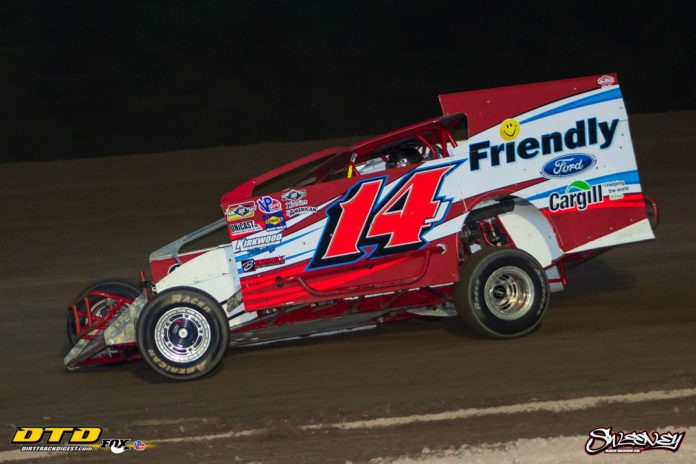 DUNDEE, NY – Matt Sheppard appeared to be on cruise control on Friday night at the Outlaw Speedway, but a flat tire derailed his bid to win.  The benefactor of that flat tire was Alan Johnson, who powered around Sheppard on a restart with just 3 laps to go and cruised to victory.

Greg Birosh and Corey Costa lead the starting field to the green with Costa jumping out to the early lead, but when the first yellow flag of the event would fly on lap 3, Matt Sheppard was already up to the 9th position.

By the 10th circuit Sheppard was working his way past Alan Johnson with his sights set on the leaders.  Just two laps later, he would take the lead he’d never relinquish driving past the 02 of Costa on the bottom of the speedway.

Matt Sheppard appeared to be on cruise control from there as he jumped to a big lead.  Unfortunately for Sheppard the yellow flag would fly on lap 27 and it revealed a right rear tire that was starting to lose air pressure.

Sheppard stayed on track for the restart but the soft right rear didn’t provide enough grip to hold off Alan Johnson on the restart.  Johnson cruised by but the yellow flag would fly again.  This time Sheppard pulled his 9s machine pitside to change the right rear tire.


On the restart Alan Johnson jumped out to the lead and collected another victory at the Outlaw Speedway.  Based on the race monitor results, Matt Sheppard did not complete all 30 laps, so the bounty offered by Tyler Siri was not eligible to be collected.