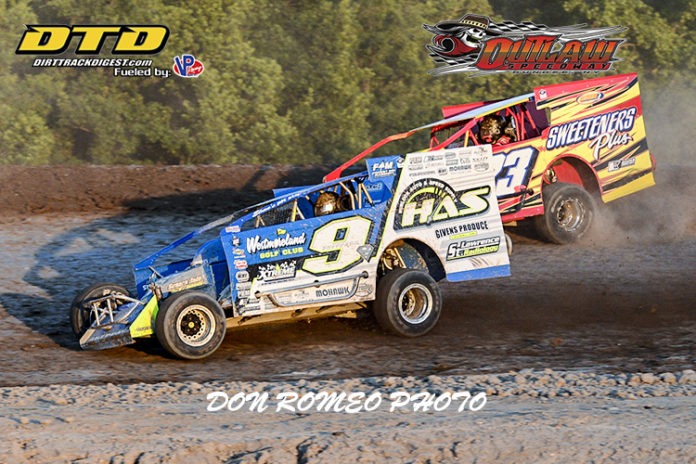 DUNDEE, NY – Matt Sheppard certainly does not have the greatest luck in Dirt Modified racing, suffering a flat tire just before halfway in the 30-lap Modified make-up feature. The flat didn’t deflate Sheppard’s drive to win, coming from the rear to pass Brady Fultz with three laps remaining to score another win.

Fultz used his outside pole starting spot to jump out to the lead at the start of the first Modified main of the night, a make-up from the rain two weeks prior. No surprise, the man on the move early was Sheppard, driving from tenth to third in the opening handful of laps, then looking for second just as a lap six yellow waived. Sheppard immediately went to second, with Erick Rudolph and Kyle Coffey going to third and fourth.

Fultz showed strong speed, holding Sheppard at bay for the moment. Sheppard took a look at the lead on lap 11, but a blown right rear sent Sheppard sliding off the top of turn two. The yellow waived, and Sheppard went to the pits for new rubber.

This placed Rudolph and Coffey second and third for the restart, and the top three were inseparable. At halfway, it was Fultz by half a second over Rudolph, Coffey in tow. With Rudolph low, Coffey snuck around the top of Rudolph to take second on lap 21. One lap later, the yellow waived again, and a brief glance at the scoreboard noted Sheppard had clawed back to fifth.

Immediately following the restart, Sheppard disposed of Alan Johnson and Rudolph to grab third, putting heavy pressure on Fultz and Coffey. With Fultz and Coffey up top, Sheppard went bottom and nearly took both spots at once, but a yellow on lap 27 placed Fultz back out front.

With Sheppard restarting second, he drove by Fultz in the first pair of turns following the restart. The two-to-go signal and white flag came and went, with Sheppard rapidly extending his lead en route to another Modified win. Fultz crossed in second, with Coffey, Johnson, and Justin Wright completing the top five.

“I’d certainly rather not have to come from the back more than I have to,” noted Sheppard. “Thankfully we didn’t hit anything when the tire came apart, and we were able to come back through. That just shows you how good our team is, to have trouble like that and have a car that can drive back through.”

Sheppard made it a clean sweep of the two Modified features at Outlaw Speedway, winning the rained-out event to start the evening and the regularly scheduled race. No drama in the latter event, as Sheppard took advantage of a rare up-front starting spot to dominate the event.

Eldon Payne took control at the start of the 30-lap main, with Sheppard quickly getting to second from his fourth starting spot. Sheppard patiently stalked Payne, pulling the trigger on lap five to take the lead. A quick yellow kept Sheppard in check for the moment, but was long gone after the restart.

Rudolph drove by Payne for second on the restart, but Sheppard was already out to a big lead. Three seconds was the gap before a lap 12 yellow, but once more, Sheppard fired strong on the restart. Rudolph stayed constant in second, with Kyle Coffey and Danny Johnson going at it for third. Invader Mat Williamson started twelfth, but was holding steady in the top five as the race passed halfway.

Sheppard’s pace did not slow as the lap counter clicked away. With ten to go, Rudolph started to slow his pace with some issues, surrendering second to Coffey on lap 24. The battle consisting of Johnson, Williamson, and Jim LaRock closed in, but this was all nearly half a lap behind Sheppard. Out front, it was Sheppard dominating the second Modified feature, cruising to the win over Coffey, Rudolph, Johnson, and LaRock.

“It always helps starting near the front,” Sheppard said. “In a way it can hurt not knowing where other fast cars are running, but we have such a good piece it’s hard to get worried about anything. We’re definitely happy with the way we’re rolling here.”

In the Sunrise Insulation American Racer Tire Crate Sportsman feature front row starters Lance Irwin and Bryan Rhodes brought the twenty-one-car field to the opening green flag. 2019 Outlaw Speedway Hoosier Tire Track Champion Will Shields lined up outside row two and wasted little time getting to the point and once there went on to his first feature win of the year on American Racer Tires. Shields, like several others does double duty each and every week on both tire compounds nailed the set up to perfection and cruised to the win as a host of heavy hitters in the class chased him across the line including second and fourth place finishers and former Track Champions, Karl Comfort and Chris Fisher. Zach Sobotka continues his impressive season as he was sandwiched in between Comfort and Fisher and finished third. Alex Payne once again put on a steady drive to claim fifth. With the win Shields now becomes the sixth different driver to find victory lane thus far in 2020 in the Sunrise Insulation American Racer sponsored division.

In the companion Hoosier Tire Crate Sportsman Division another impressive full twenty-four car field was again on hand to compete in their twenty-five-lap feature event. With Jordan Bacon not firing on the starting grid he relinquished his outside front row starting spot as second generation and Rookie of the Year contender, Tommy Paine brought the field to the opening green flag. Lance Irwin would lead the first six laps before being overhauled by veteran driver, Stacy Jackson who would control the pace. With only three yellow flags to slow the event, Jackson looked flawless until lap sixteen when Zach Sobotka would take control just before the third and final caution flag on lap seventeen. Having to withstand one final challenge from Jackson and Tommy Collins, Sobotka was able to hold on for his third trip to victory lane on Hoosier Tires in 2020 as he was chased across the line by Collins, Zach George, Jackson with Tommy Paine running in the lead group throughout the entire event finishing fifth.

Like Matt Sheppard before him, Glen Whritenour also had a Bounty placed on his head for any driver that could knock off the 2017/2018 Stan’s No Tubes Street Stock Track Champion. Coming into the event GW had won the previous three feature events and had four wins total on the season thus the track Bounty of an additional $250 to anyone that could take down the potent #15 machine. Opening night feature winner, Quinn Sutherland along with young gun, Aaron Miller brought the fourteen-car field to Raymond Kennerup’s opening green flag. Sutherland would take the early lead and looked poised to upend the Glen Whritenour stranglehold on the division as he would lead until lap eleven when he would fall prey to the high flying Whritenour. From there GW would have to hold on thru two yellow flag slow downs on laps fourteen and sixteen and keep a very persistent Quinn Sutherland at bay to claim the win. At the completion of the twenty-lap affair, Whritenour won by less than a second over Sutherland as Bob Buono had his best finish of the season in finishing third. Invader Damian Long looked strong throughout the entire distance and wound up fourth at the end as he was chased across the line by one-time 2020 feature winner, Jake Karlnoski who rounded the top five. After a post- race tech inspection, the Quinn Sutherland machine was found in violation thus wiping out his great second place run as he was relegated to a DQ. With Whritenour’s win the Bounty will continue to next Friday for any driver that can take down GW while he is still racing on the lead lap.

Stan’s No Tubes heat wins were pick-ed up by Miller and Whritenour.

A season high fifteen IMCA Modifieds were on hand for their twenty-lap feature with a field of several invaders including feature winner Keith Lamphere making a rare appearance at the Yates County facility and coming away with the victory. Track regulars, Rich Karlnoski and Kevin Smith brought the field to the opening green flag with Lamphere lining up ninth on the starting grid. Steadily working his way thru traffic, Lamphere was able to get to the front and onto his first trip to victory lane in 2020. Last weeks feature winner, Shawn Bruce dogged Lamphere to the checkered flag but came up just short at the finish and had to settle for second. Like Lamphere, Jake Maynard was also making a rare appearance and made the trip worthwhile as he claimed the third and final podium finishing spot. 2018 IMCA Modified Track Champion, Rodney Morgan was fourth at the line as he was followed by Trey Palmer who completed the top five.

In the companion IMCA Hobby Stock Division the largest field of the year was on hand as some nineteen machines took the opening green flag. Throughout the entire 2020 season, Wayne Ellison has been the man to beat with two time and defending Track Champ, Marc Minutolo the only driver to take down Ellison and on two occasions he (Ellison) was out with mechanical issues. In typical Hobby Stock fashion the action was fast and furious with plenty of side by side action, but in the end and for the fifth time this year Wayne Ellison was just too hard to handle and picked up the victory as he was followed across the line by class top runners in Casey Wagner, Bruce Kinner, Jamie Eldredge Jr. and Jason Clugstone who finished in positions second thru fifth.

For all practical purposes, Jeremy Bunn and Bob Doolittle have used the 4 Cylinder Division as their own personal sand box with Scott Lehman Jr. and Ray Hyer the only other two drivers to visit victory lane thus far. Doolittle looked poised to pick up win number four on the season, but exited the speedway late in the event thus handing the lead and the win to, you guessed it Jeremy Bunn who would go on to claim win number four on the year. Lee Fritz and lady competitor, Desi Force would lead the seventeen-car field to the opening green flag with both Doolittle and Bunn starting in the fifth row. It would not take long for both Doolittle and Bunn to get to the top two positions, but all eyes were on last row starter and last week’s feature winner, Ray Hyer. The veteran driver was mowing the field down and with Doolittle out was setting his sights on race leader Bunn, but time ran out and Hyer had to settle for second at the double checkered flags. Lehman Jr. put on another steady drive to claim third at the end of the twenty-lap event as he was followed by Derrick Evans and Scott Lehman Sr.

In the Winner’s Circle Deli Bandit Youth Division Ethan Decker was again victorious in the classes feature only event.

Friday, August 7, 2020 will again feature a Super 7 Show and as per NYS regulations NO FANS will be allowed into the grandstand seating area. However, pit entry is allowable and for those who can not attend online viewing is available once again by going to www.dirttrackdigest.tv.

For continual updates leading up to the August 7 event including any changes in NYS guidelines pertaining to fan entry click on at www.Facebook.com/OutlawSpeedwayLLC/.
All other information including a complete updated list of the 2020-point standings can be found by logging on at www.outlawspeedwayllc.com.