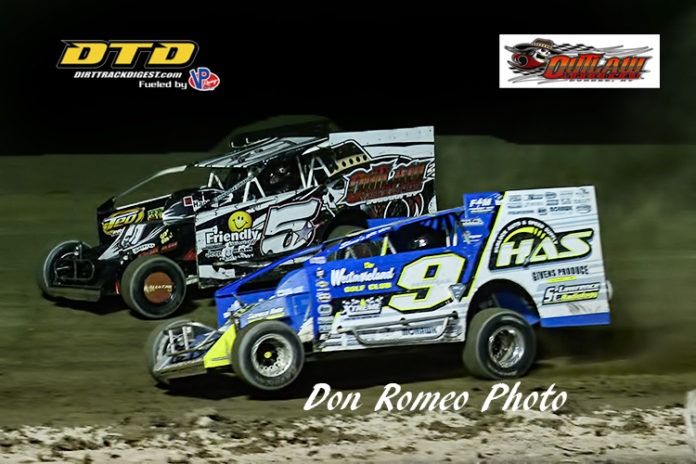 DUNDEE, NY –  With each passing week, Matt Sheppard seems to be getting faster and faster. Following a pair of wins last week, Sheppard took his most dominating win yet, lapping all but the top five cars.

Tyler Siri took control over Eldon Payne at the start of the 30-lap Modified feature, with Sheppard jumping from eighth to third in the opening lap. After a brief battle with Payne, Sheppard took second on lap five, then erasing Siri’s ten car length advantage in an instant. Slight contact with a lapped car got Siri out of shape, and Sheppard stole the lead on lap seven.

Once out front, Sheppard quickly became a memory to Siri and Payne. By halfway, positions were shuffling inside the top five, as Rudolph had taken third from Payne and went to work on Siri. While Siri and Rudolph battled, Sheppard’s lead was over half a lap and continuing to grow. Rudolph eventually cleared Siri on lap 20, but Sheppard was too far gone to make a run.

Sheppard seemed to be a lock for another dominating win, but a caution with two laps left erased his nine second advantage. However, a flawless restart gave Rudolph no shot to make a move, and Sheppard scored his seventh Outlaw win of the year. Rudolph finished second, with Alan Johnson, Siri, and Payne the top five.

“I’ve never had a car as good as the one we got here this year,” Sheppard said. “I feel like a kid again, coming here and just having fun. We had a real nice track tonight, top, bottom, and a middle, but I really didn’t want to see that yellow with two to go.”