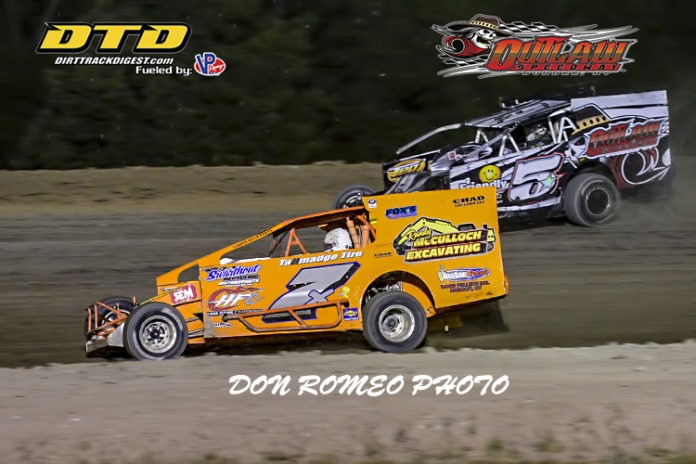 DUNDEE, NY – For the second time in 2020, Hurricane Steve Paine was able to work his way into the Outlaw Speedway victory lane.  Lance Dusett and Boss Man, Tyler Siri brought the twenty- car field to the opening green flag for the thirty- lap event.  Siri would immediately jump into the lead which he would hold down thru numerous caution flags which would slow the race. Steve Paine and Alan Johnson who both have visited victory lane at Outlaw Speedway in 2020 lined up eighth and tenth respectively while current second place point man, Danny Johnson started eleventh. All eyes were again on Super Matt Sheppard who would line up twelfth on the grid and by lap seven was already up to the seventh position.  Track owner, Tyler Siri had put up an additional $2,000 to any driver that could upend Super Matt and go onto the feature win.  However, with Sheppard suffering serious right side damage to his potent 9s machine while coming thru traffic he made yellow flag pit stops to try and have the problem rectified finally exited the event on lap seventeen and was officially listed in the fifteenth position and with that the Bounty Money continues onto next Friday.  While out in front Siri was continuing to set a blistering pace, but Paine, the brothers Johnson and Eric Rudolph were starting to climb up the leaderboard and with the help of caution flags on laps fifteen, seventeen and twenty allowed them to keep Siri within the cross hairs.  Finally, on lap twenty-three, Hurricane Paine was able to set Siri up for the winning pass and from there went on to back up his first feature win of 2020 on July 17.  Once out in front, Paine was able to stretch the advantage to a full three seconds as he cruised to the win.  Boss Man, Siri was able to hold off a hard charging Jim LaRock to claim the second spot with LaRock trailed at the line for third.  Kyle Coffey put on the drive of the night as the pilot of the Sweeteners Plus machine started fifteenth on the grid, took full advantage of the caution flags, moved thru traffic and claimed another top five by finishing fourth.  AJ Slideways, Alan Johnson bested brother Doctor Danny Johnson by one spot to round out the top five.

The evening got started off with the Stans No Tubes Street Stock make-up feature from July 10.  Glen Whritenour, like Super Matt Sheppard had Bounty Money placed on him for any driver that can stop his current five race win streak.  In the twenty-lap event Aaron Miller would grab the opening lead which he would hold on to for just one lap before CJ Guererri would take over the top spot. Guererri looked poised to pick up his second feature win of the season building up a sizeable lead.  However, Whritenour had other ideas and although starting in the tenth spot, GW quickly moved thru traffic and was running third by the halfway mark of the twenty-lap affair.  It took the potent number 15 machine just one lap to dispose of the second-place machine of John Carpenter and on lap twelve cleared Guererri for the lead and from there would open the advantage.  Only one caution flag on lap sixteen would slow the pace and allow Guererri one last shot at Whritenour, but it was to no avail as GW coasted to his seventy-feature win of 2020 and sixth straight.  Guererri held on for second at the finish chased across the line by Jared Hill, Quinn Sutherland and Aksel Jensen who completed the top five.  With that the Bounty Money would now roll over to the regular night feature event.

In the night cap CJ Guererri and Jared Hill would bring the fifteen- car field to the opening green flag with Whritenour mired down in starting spot number eleven.  Hill would immediately move into the lead and at the half way mark of the twenty-lap feature he was still holding court at the top while being chased by Jake Karlnoski and Whritenour who was now up to third, however that is as far as GW would get as on lap eleven he would suffer thru mechanical issues, drop back thru the field and finally exit the speedway on lap fifteen and was credited with a ninth place finish.  However, while not on the lead lap and running at the finish the Bounty Cash rolls over till next Friday.  With the fifth and final yellow flag waving on lap thirteen, Hill just needed to keep his nose clean as with both Karlnoski and Whritenour now out all he had to do was keep Guererri at bay to pick up his first win of the season.  For Hill, Guererri and third place finisher, Quinn Sutherland and fifth place runner, Aksel Jensen it was a very good night as all four finished in the top five in both feature events.  Bob Buono chased Sutherland across the line to claim fourth while Jensen was fifth at the double checkers.

In the Sunrise Insulation American Racer Tire Sportsman feature Casey Williams would jump into the early lead and would hold the top spot until lap six when three time 2020 feature winner, Ajay Potrzebowski would wrestle away the lead, withstand four cautions and one red flag that would slow the event and go on to the win.  The red flag stopped the event for nearly twenty minutes as a bone jarring crash found current high point man, Chris Fisher taking a violent flip.  In all some eight machines were included in the melee including second place point getter, Zach Sobotka along with Kaiden Dgien, Billy Paine, and invader, Jim Spano who were all done for the night.  After the track was cleared Potrzebowski would continue to build on his lead as two more caution flags would slow the pace on laps eleven and fifteen.  From there it was clear sailing for Potrzebowski as he went on to feature win number four on the year as he was followed across the line by early race leader, Casey Williams who had his best finish of the year.  Third place went to Travis Grover, Kevin Stevens in his first appearance was fourth while Alex Payne rounded out the top five finishers.

In the Hoosier Tire Sportsman Division Casey Williams and Travis Grover who both do double duty in the two sportsman classes would lead the twenty -car field to the opening green flag in their twenty-five-lap event.  Like he did on American Racer Tires, Williams would again take the top spot on Hoosier Tires and lead the opening five circuits.  Grover would take control from there and lead the next ten laps before fifth place starter, Alex Payne would wrestle away the lead from Grover and go on to his second feature win on Hoosier Tires this season.  Zach Sobotka would recover from his incident in the earlier evening American Racer Tire train wreck to claim third at the finish and maintain his current point lead in the class as he was chased across the line by Tommy Collins Jr. and Will Shields who ironically sit second and third in the points. In all some seven caution flags would slow the event, but for Payne it again was a stellar night with his win on Hoosiers and a fifth on American Racer Tires.

In the IMCA Modified Division Kevin Smith would start outside of the front row, take the lead early and go onto his second feature event win of the 2020 season backing up his previous win on July 17.  Rodney Morgan who came into the night with five feature wins on the season and looking to make it two in a row came up a bit short at the line and had to settle for second place as he was followed across the line by one time feature winners in Shawn Bruce and Bad Brad Smith who finished third and fourth while Jared Spaulding claimed fifth at the finish of the twenty lap main.

In Mighty 4 Cylinder feature action, Kenneth Evans would take full advantage of his outside front row starting position to claim his first trip to victory lane in 2020.  For Evans it was by no means a walk in the park as he had to withstand pressure from four-time feature winner, Bob Doolittle in claiming the victory.  In fact, outside of Doolittle’s second place finish the top five was littered with previous 2020 feature winners as Scott Lehman Jr. nailed the third spot, four- time feature winner Jeremy Bunn came home fourth as Ray Hyer rounded out the top five.  It was a well -deserved win for Kenneth Evans as he held off the very best that the class has to offer.

The IMCA Hobby Stock feature found a familiar face once again taking the feature win as Wayne Ellison was able to mow the field down from his sixth row starting spot and go onto claim feature win eight on the year.  Brian Lloyd and Casey Wagner brought the seventeen car field to the opening green flag, but most eyes were on the top guns in the class with Bruce Kinner lining up ninth, two time and defending class champion, Marc Minutolo in tenth and Ellison in twelfth.  Consistent runner Jeremy Trank lined up outside the third starting row.  With Minutolo having problems and finishing well back that left the door wide open for the remainder of the field and like he has done seven previous times this season, Wayne Ellison was just to much for the competition to handle as he got to the front and left everyone else fighting for second place.  At the finish it was once again Jeremy Trank coming up just one spot shy of winning his first feature win of the year as he claimed the runner up spot.  Bruce Kinner continues to keep pace with Ellison in the point standings as another consistent third place run will keep in second in the point tally.  Casey Wagner ran inside the top five all feature event and wound up fourth at the end while Amber Pierce was able to hold off sister, Allison Pierce to claim fifth at the completion of the twenty-lap feature.

In the Winners Circle Deli Youth Bandit Division Ethan Decker was able to hold off Abby Decker for yet another feature win and with that solidifying his huge point advantage in the class as the weeks continue to wind down.

Coming up next Friday, August 21 it will be a Regular Super 7 Show with another make up feature from July 10 included on the agenda.  As per NYS regulations there are still no fans allowed into the grandstand seating area, however those that cannot attend in the pit area, visual coverage of the event can be found on DirtTrackDigest.TV.

For continual updates leading into the night of action keep an eye on www.Facebook.com/OutlawSpeedwayLLC/.

With just two point races remaining on the season an updated list of all current points along with other valuable information can be found by logging on at www.outlawspeedwayllc.com.