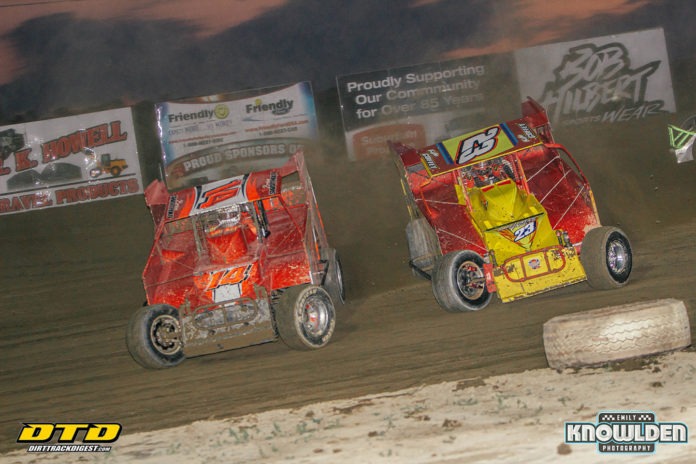 “Due to the Covid 19 Pandemic, Outlaw Speedway like every other venue in the northeast got off to a late start. It was early June before we could even host our opening night of action. Since then we have been in conservation mode by only hosting Regular Super 7 Shows each Friday night since we first swung open the gates. With no fans allowed in the stands as per NYS Governor Cuomo’s orders, we have had to forgo all Special Events thus far including any 360 Sprint events, the All Star Circuit of Champions 410 Show, the Brett Deyo Short Track Super Series, NASCAR Night along with all our local special events. We have been able to weather the storm with pit admission along with those at home watching on PPV via DirtTrackDigest.TV. We have held our own thru an environment that has been tough at best, but with the late start coupled with the fact that we have had tremendous car counts each and every week we have decided to extend the season thru the month of October.” That according to track owner/promoter, Boss Man Tyler Siri.

The Outlaw Speedway Regular Point Season will conclude on Friday, August 28, 2020 with Double Point Championship Night at the track. Tentative plans call for a Fall Miniseries beginning on Friday, September 4, 2020 with the format being a Draw/Re-Draw for heat and feature line-ups versus the traditional handicap system. The classes involved on a weekly basis will be the Friendly Chrysler, Dodge, Jeep, Ram Modifieds racing for a weekly winners share of $2,000. The Sunrise insulation American Racer Tire Sportsman as well as the Hoosier Tire Sportsman will run for $750 to win. Also scheduled to compete will be the Stan’s No Tubes Street Stocks racing for $500 to win along with the IMCA Hobby Stocks as well as the Mighty 4 Cylinders each offering a winners take of $300.

Points will be awarded in each division throughout the running of the Fall Miniseries.
It should be noted that if the current protocol set down by the State of New York stating that fans are not allowed into the grandstand seating area is lifted, the Outlaw Speedway will then revisit their originally scheduled events including the 5th Annual Fall Nationals set for September25 and 26 along with Dutch Hoag Triple 7’s Weekend on October 23 and 24. The track at that time can exercise their option to push the reset button and go back to the pair of two night events which include outside touring series and massive purse structures. However, if New York remains steadfast in not allowing butts in the bleachers it will be a Super 6 Show each Friday night.

“We are trying to salvage the season,” stated Siri. “By going deeper into the fall, we can make-up for some of what we lost in April and May. A lot of tracks have not even opened, and many will be shutting down for the season in a few weeks. By running later, there is the potential of several non -weekly competitors visiting Outlaw Speedway. A lot of teams will be looking for some place to compete in the fall and with us staying open it gives them a viable option to come here and race.”

For continual updates leading up to each Friday nights activities including gate and start times simply go to www.Facebook.com/OutlawSpeedwayLLC/.

A current list of the point standings as well as other valuable information relevant to the facility can be found by logging on at www.outlawspeedwayllc.com.