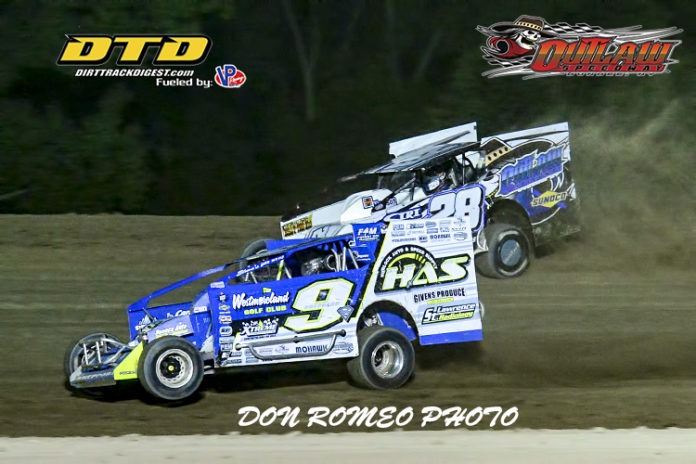 DUNDEE, NY – The Matt Sheppard and Glen Whritenour stranglehold on the competition in their respective classes continues at the Outlaw Speedway as both won their feature events on Friday, August 21 and with their victories the Bounty Money posted by the track will continue on yet another week.

The night got off to a fast start with the makeup feature in the Sunrise Insulation American Racer Tire Sportsman Class held over from a July 10 rain out. In that event Ajay Potrzebowski made short work of the twenty-five lap affair as he immediately took control of the event from his front row starting spot, led every lap and with only one caution on lap two to slow the pace he went on to his fifth feature win of the year. Potrzebowski had to contend with a persistent Troy Sperring who was looking to back up his first feature win of a few weeks earlier, but the seasoned veteran was up to the challenge, hit his marks to perfection and was able to hold off Sperring by less than a second at the double checkered flags. Will Shields and Chris Fisher both lined up inside the top five at the start and finished third and fourth while Karl Comfort advanced two spots to claim fifth. For Fisher it was a nice recovery after taking a bone jarring side over side flip just one week prior and keeps him in the hunt to back up his 2018 track title, but with the Potrzebowski win he will extend his small point advantage leading into the night cap feature event.

In the regularly scheduled Sunrise Insulation American Racer Tire Sportsman twenty-lap main event Billy Paine and Zach Sobotka brought the nineteen-car field to the opening green flag with Sobotka taking control immediately. Sobotka is one of several drivers that does double duty each week at Outlaw racing in both Sportsman Divisions and was looking to back up his lone feature win in the class dating back to June 19. With just one caution flag to slow the event, Sobotka would lead thru lap seventeen when 2017 Track Champion, Karl Comfort would make his move, take over the top spot and go onto his first feature win of 2020 by several car lengths over Chris Fisher. Sobotka would fall back to third at the completion as he was chased across the line by Casey Williams who finished fourth while Ajay Potrzebowski had another solid top five run claiming fifth at the finish and should maintain a very small point advantage leading into the season finale double point show next Friday.

Coming off a disappointing finish last Friday due to significant damage done to his potent 9s Modified, Matt Sheppard got back on track in dominating fashion as he nailed feature win eight on the 2020 campaign in the Friendly Chrysler, Dodge, Jeep, Ram Modified Division. Super Matt, who lined up in his traditional twelfth starting position, charged thru a star- studded field, got to the point and said see you later as he built up an insurmountable lead. Even with a mid-race yellow on lap fourteen to bunch the field, Sheppard was able to stay in clean air, keep fourth row starting AJ Slideways, Alan Johnson at bay and cruise to a four and a half second win while lapping up to the ninth place machine. The Brothers Johnson who are trying to keep pace with Super Matt in the point battle both had good runs with AJ Slideways holding off Doctor Danny for second with the Doc in third as young guns Kyle Coffey and Jordan Siri claimed fourth and fifth. Siri lined up in the front row at the start, ran with the lead group all race long and claimed a well-deserved top five finish. For Coffey it was a little tougher as he was buried mid-pack, drove another methodical race and claimed a top finish helping his effort in taking a top five-point finishing position with just one-point event remaining.

In the Hoosier Tire Sportsman twenty-five lap feature AJ Lloyd and JT Sperring led the sixteen-car field to the opening green flag. Zach Sobotka, who lead the points coming into the night lined up twelfth on the grid and had his work cut out for him. However, like he has done three times previously this season, Sobotka was able to barn storm the field, take the lead and just barely nip AJ Lloyd at the line to claim victory number four. A disappointed Lloyd, who is a picture of consistency each week at Outlaw Speedway will have to wait one more week to try and pick up his first feature win of the season. As expected, Will Shields, Alex Payne and Tommy Collins Jr. all put in great drives as they finished third thru fifth at the finish. With his win Sobotka will extend his already healthy point advantage over Collins Jr. heading into next week’s double point feature event. Last year’s Track Champion Will Shields is still in the hunt but will need a miracle next week if he plans on defending the title.

In the Stan’s No Tubes Street Stock Class a pair of strong runners in Aaron Miller and John Carpenter would bring the seventeen car field to the opening green flag, but all eyes were on ninth place starting, Glen Whritenour as he looks to maintain his season long dominance of the class. Carpenter would lead early but by lap twelve GW had taken away the lead on a restart. A rash of caution flags from laps twelve thru seventeen, four in all would keep the field within striking distance of Whritenour. The last yellow on lap seventeen found CJ Guererri glued to the rear bumper of the Whritenour #15 machine and it appeared as though Guererri could take home the $500 Bounty Money which the track placed on Whritenour. However, that was not the case and try as he might, Guererri came up just a half a second shy of claiming his second win of the year. With that the Bounty Money rolls over to next week. For Whritenour it was win eight on the year and keeps pace with Sheppard in the win column. Guererri wound up second chased across the line by one -time feature winner, Jake Karlnoski who finished third. John Carpenter continues his strong 2020 performance in the class by nailing the fourth spot at the completion of the twenty-lap grind as invader, Kane Stebbins came home for fifth.

Josh Oles made the move this season from the 4 Cylinder class into the IMCA Hobby Stock Division and has found the class much to his liking with some solid runs. However, on this night Oles would line up outside the front row at the start, stay in clean air throughout, withstand numerous caution flags and come home with his first ever feature win in the division. With his win it breaks the four-race win streak of Wayne Ellison and for only the third time this season the class finds a different face in victory lane. Marc Minutolo, the other feature winner in the class mustered up a third-place finish at the end as Justin Eldredge had one of his best finishes of the season coming home in the runner up spot. Fourth at the finish went to Casey Wagner with Wayne Ellison rounding the top five. Second place point getter, Bruce Kinner had a rare off night finishing tenth and will lose ground to Ellison heading into next week’s double point finale.

Like multi 2020 feature winners, Sheppard, Whritenour, Sobotka and Potrzebowski before him, Rodney Morgan was able to win the twenty lap IMCA Modified feature event for his sixth trip to victory lane thus far. The 2017 Track Champion in the Nationally Sanctioned Division lined up fifth on the opening green flag, wrestled the lead away from Jared Spalding on lap ten and cruised to the victory. Shawn Bruce who was looking to back up his previous win on July 24 was no match for the high-flying Morgan and had to settle for second. Spalding drifted at the end to a solid third place finish after leading the first half of the event as he was chased across the line by another 2020 feature winner in Bad Brad Smith while Dick in the Dirt, Rich Karlnoski rounded the top five at the finish. Throw a blanket over the top five in points leading into next week’s finale as any driver on the point leader board has a mathematical shot at the championship.

In the Mighty 4 Cylinder Division some seventeen cars lined up for their twenty-lap main event. Bob Doolittle and Jeremy Bunn have dominated the class all year long with only a few other drivers able to break the juggernaut. However, Scott Lehman Jr. in his potent front wheel drive machine was able to blast thru the field from his fourth row starting position and once out in front held off the best the class has to offer and claim win number two on the year. For Lehman Jr. it was no cake walk as he had to hold off a determined Bob Doolittle who wound up second at the finish as well as his own father, Scott Lehman who claimed the third and final podium spot. Last week’s feature winner, Kenneth Evans had another solid run finishing fourth while Jeremy Bunn claimed fifth at the end. With his runner up finish, Doolittle can inch a little closer to Jeremy Bunn’s point lead heading into the August’s 28 point finale at the track.

In the Winner’s Circle Deli Youth Bandit Division Abby Decker was finally able to put things all together in winning the feature event after numerous runner up finishes to her brother Ethan. However, Ethan has an insurmountable point advantage over Abby and Blake Parsons heading into next week’s Double Point show.
Congratulations once again to all competitors.

Friday, August 28, 2020 will find the Double Point Regular Season Finale which will determine the 2020 Track Champions in all classes. The event will include a make-up feature in the IMCA Modified Division for a July 10 rained out event.
All the hype leading up to the night of action can be found by going to www.Facebook.com/OutlawSpeedwayLLC/.

Gates will open at 5:30, hot laps at 6:30 and the first green flag will wave at 7:30.
With the point battles at a fever pitch you can log on at www.outlawspeedwayllc.com for a complete update of the point standings heading into next Fridays Double Point Show which will conclude the regular season heading into the all new Outlaw Speedway Fall Series. As noted in previous press releases and Facebook posts track owner, Tyler Siri and his girlfriend Jordan Lynch have added on two more full months of Fall Season racing every Friday night starting on September 4 thru October30, 2020.

As is every event at Outlaw the schedule is subject to change should New York State relax the stringent protocol of not allowing fans into the grandstand seating area. In the event the ban is lifted, the track will revisit such events as the two-day 5th Annual Fall Nationals and Dutch Hoag Triple 7’s Weekend in September and October.

In the meantime, it will be business as usual with Pit Admission only as well as viewing on DirtTrack Digest.TV which continues to provide top notch audio and visual coverage for those who cannot attend.