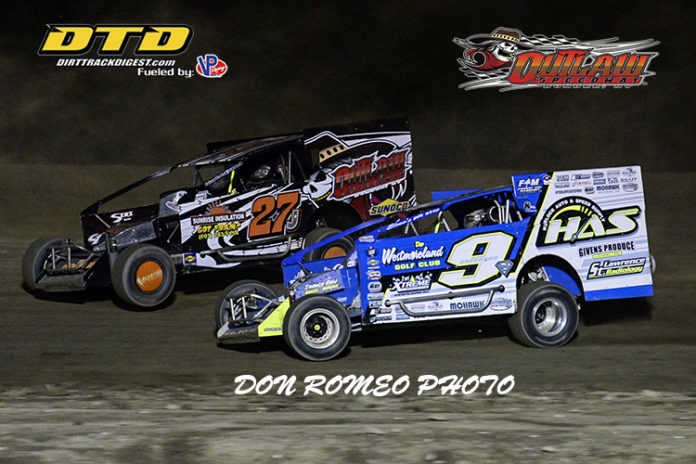 DUNDEE, NY – Many of Matt Sheppard’s nine Outlaw Speedway wins in 2020 came in dramatic fashion, this one no different. Sheppard battled Brady Fultz during the entire back half of the 30-lap Modified main, with Sheppard coming out on top with both the feature and track championship trophies.

Fultz used his front row starting spot to grab the lead and ditch the field at the drop of the green, putting nearly a straightaway between himself and Jordan Siri by lap five. With a handful in, Sheppard had already passed more than a handful of cars, up to third from tenth. Lap nine was when Sheppard snuck under Siri for second, then quickly working to erase Fultz’s gap.

Traffic hampered Fultz’s momentum, allowing Sheppard to pull within striking distance before a lap 13 caution. With Fultz up top, Sheppard went to the bottom, nearly drawing even before another yellow at halfway. Fultz fired well on restarts, holding off Sheppard once more until a lap 19 stoppage.

Both Fultz and Sheppard went to their respective lanes for the final dash to the finish, with Fultz throttle down on top and holding Sheppard at bay. As laps ticked away, Sheppard drew closer to Fultz inches at a time, pulling alongside Fultz’s door with five laps left. Multiple times, Sheppard appeared to be headed to the front, but Fultz kept fighting back.

After half a race trying, Sheppard finally got the launch he needed on the bottom to nose out in front of Fultz, immediately taking the top line away and leading lap 27. From there, Fultz was left to fend off a charging Alan Johnson while Sheppard darted away from the pack. With the checkered waiving, it was Sheppard winning over Alan Johnson, Fultz, Kyle Coffey, and Danny Johnson.

“We finished that one just in time because my left rear is going down,” Sheppard said. “We won nine races and I feel like we had about 14 flats this year, so hopefully I can use some of that bounty money to buy some tires. That bounty deal was cool, we held them off and won every race we finished for two months. The track was super fast tonight and Brady was rolling good up top, but we were able to get by him right at the end.”