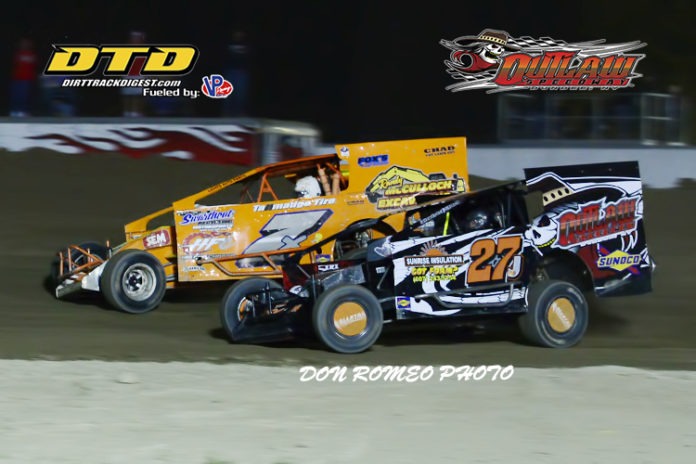 DUNDEE, NY – Under near perfect late September weather conditions the Outlaw Speedway played host to Fall Series Event #3 as some 103 cars checked in for the Super 6 Show.

In the thirty- lap feature event and by the luck of the re-draw, Fall Series Event #1 feature winner, Steve Paine and invader, Sam Allen lead the field to the opening green flag.  Hurricane Paine immediately jumped into the lead which he held until lap seven when third row starter, Danny Johnson stormed by on the outside to take command.  The Doctor, running a very unique diamond shaped line around the top side of the speedway began to stretch the distance between himself and the rest of the competition as fourth row starter, Super Matt Sheppard was methodically working his way thru traffic.  By lap twelve, Sheppard had cleared Paine along with the third-place machine of Joe Dgien and set sail for race leader Johnson. For the entire second half of the event Super Matt tried every line on the racetrack to make his move on the high-flying Doctor Danny who was hoping to make it two wins in a row at Outlaw Speedway.  Lap after lap Sheppard continued his relentless pursuit and lap after lap Johnson was able to hold the nine- time 2020 feature winner at bay.  All the while the top two were slugging it out for the win, Tyler Siri was making his way into the battle from his fifth row starting spot as last row starter, AJ Slideways, Alan Johnson was mowing the field down and had cracked the top five.  With just handful of laps remaining The Doctor still maintained a comfortable three car length lead over Super Matt with Bossman Siri, Hurricane Paine and AJ Slideways all now within striking distance of the lead duo.  But when the double checkered flags waved it was Danny Johnson claiming his second win in a row at Outlaw with Matt Sheppard having to settle for second.  Siri wound up third with early race leader, Paine coming home for fourth.  Without question the drive of the night was put on by fifth place finisher, Alan Johnson after being a no show in his qualifying heat race had to start last on the opening grid.  Quick arithmetic will show that the top five finishers including Siri, the brothers Johnson, Paine and Sheppard have produced well over fifteen hundred feature events during their illustrious careers, perhaps closer to two thousand?

The Hoosier Tire Crate Sportsman twenty-five lap feature event was slowed by numerous yellow flags and two red flag stoppages for the machines of Adam Taft who found himself upside down in turn two after a lap two restart which took out several other machines.  The other red flag involved Eric Williams piloting the Greg Crooker owned car after a bone jarring front straight away incident prior to the halfway mark.  Recently crowned 2020 Regular Season Hoosier Tire Track Champion, Zach Sobotka wasted little time moving to the forefront from his outside row two starting position and once out in front distanced himself from the rest of the field.  A couple late race cautions allowed second place runner, Nick Guererri the opportunity to make a run at Sobotka, but came up just a few car lengths short at the completion of the twenty-five-lap grind.  Front row starters Brett Buono and Stacy Jackson ran inside the top five the entire distance to finish third and fourth while Alex Payne began the night in seventeenth, stayed out of trouble and rounded out the top five.

It was a totally different story in the companion Sunrise Insulation American Racer Tire Sportsman twenty-five lap A Main as by the luck of the re-draw last week’s feature winner, Donnie Lawson started on the pole and led early in the going.  Lawson, who finds the bottom of the Outlaw Speedway much to his liking gave way to relentless pressure from Billy Paine who secured the lead and would hold on to claim his second feature of the season and first in the Fall Series.  However, from second on back the racing was some of the best seen at Outlaw Speedway in 2020 as the entire top seven were all challenging for position with side by side racing throughout.  Chris Fisher who started fourth was finally able to clear the likes of Lawson and Kreg Crooker and once up to second set his sights on Paine.  But, with time running out Fisher had to settle for second at the end as he was chased across the line by Kreg Crooker, Donnie Lawson while 2020 Track Champion, Karl Comfort rounded out the top five.  The battle from third on back to the eighth-place finishing, Kenny Peoples Jr. will be talked about for quite some time with plenty of two and three wide racing with little or no contact.  With his win, Billy Paine now makes it three different faces in three Fall Series races that have graced victory lane.

A much smaller than usual Stan’s No Tubes Street Stock feature event found invader, Dennis Cummings accomplishing something that many have not been able to do in recent memory at Outlaw Speedway and that was to pass and defeat 2020 Class Champion, Glen Whritenour.  Whritenour brought the field to the opening green flag and led in the early going, but a determined Cummings was able to drive by the nine-time 2020 feature winner and go on for his first win at Outlaw Speedway.  For Cummings, who also promotes the Bradford Speedway it was sweet revenge as he had flipped his primary car just two weeks ago and came out with an all new ride for this event.  After holding onto the second slot for much of the event, Whritenour exited with mechanical issues handing over the runner up position to Adam Dupuy, but with Cummings over a half a track ahead Dupuy had no chance of catching the race leader and that is how they would finish with Aksel Jensen putting yet another solid effort to claim the final podium spot in third.  Jared Hill started fifth and wound up fourth while Mark Phelps rounded out the top five.

Stan’s No Tubes heats were picked-up by Dupuy and Cummings who capped off a perfect night.

After struggling thru one of his toughest regular seasons at Outlaw, Marc Minutolo has been on a rampage thus far in the Fall Series as for the third time in as many weeks and sixth time overall in 2020 the big fella was able to hit pay dirt.  Starting outside pole in the twenty-lap event, Minutolo jumped into the early lead and was never pressured from there.  However, the story of the event was Justin Eldredge who began the event in eighth, drove thru traffic only to get sidelined with a flat tire.  Quick work by his crew enabled Eldredge to fall in at the tail of the field and he put on a driving clinic racing his way back to a runner up finish at the end.  Shawn Lloyd ran within the top five all race long to claim third as Brent Ayers was able to recover from an early race spin to wind up fourth.  Casey Wagner rounded out the top five

It’s always nice to see a first time winner in any division and that was exactly the case in the Mighty 4 Cylinder Mini Stock Division as young gun, Matt Irwin played the waiting game to perfection, cleared then race leader, Mike Stone late in the going and would go onto victory, his first ever.  Stone, who was looking to back up last week’s win started last on the opening grid, drove thru the field, took advantage of an incident between then leaders Ray Hyer and Jack Ormsby and took over the top spot at the half way mark.  However, late in the twenty lap feature Stone was not able to keep Irwin at bay as his machine was starting to slow.  Irwin was able to get by along with Brian Grant, Hyer and Chris Force who would go onto claim positions one thru four in that order while Stone dropped to fifth at the double checkers.

A pair of qualifying heat wins went to Ray Hyer and Lee Fritz.

NYS regulations stating NO FANS in the STANDS continues to be enforced with pit entry only.   For those unable to attend, audio and visual coverage are once again available by logging onto www.dirttrackdigest.tv.

For more information regarding the Oct. 2 event including continual updates leading up to the night of action simply go to www.Facebook.com/OutlawSpeedwayLLC/.

A current listing of all the points for both the regular season as well as the Fall Series log on at www.outlawspeedwayllc.com.