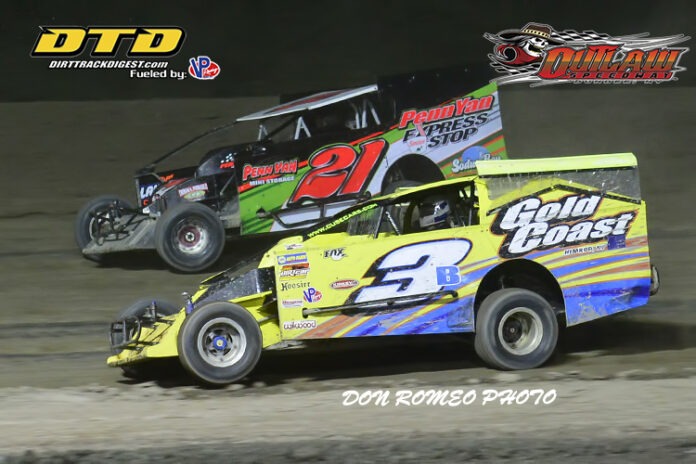 DUNDEE, NY –  For the second consecutive season, earlier than usual spring like weather has allowed racetrack promoters across the northeast the opportunity to get their facilities prepared for the 2021 race season.

The same holds true for Outlaw Speedway owner/promoter, Tyler Siri as he and his crew have been hard at work over the past few weeks prepping the fast 4/10 of a mile speedway for race action.

“My crew has worked right thru the winter months building the new pit towers and the Outlaw Saloon. Progress has been going along very nicely on both and with the unexpected break in the weather that we have had in March it has allowed us to get on the track and get it ready for our two April practice dates.” That according to Tyler Siri.

Saturday, April 3 and Friday, April 9 have been designated as the dates for test and tune at the popular Yates County facility where anyone can come and shake down their equipment for the upcoming season.

It has been well documented over the past several months that the Lane’s Yamaha 360 Sprints will be racing weekly at Outlaw in 2021 and it is anticipated that there will be a large turnout of cars and stars that compete in the 360 Sprint Division will be on hand to shake off the rust.

“Many of the 360 teams that will be competing at Outlaw this coming season never turned a wheel last season or if they did it may have been one or two events as COVID pretty well shut down most 360 Sprint Car Racing across the northeast. It is a safe bet we will have an impressive list of drivers on hand just for practice.” That once again according to Siri.

In addition to the high powered 360 Sprints those taking advantage of the open practice sessions will be many of the other weekly classes including the Friendly Chrysler, Dodge, Jeep, Ram Modifieds, the Sunrise Insulation American Racer Tire Sportsman, the Speed Connection Hoosier Tire Sportsman as well as the Stan’s No Tubes Street Stocks. In addition, the Napa Hobby Stocks along with the Winner’s Circle Deli Mini Stocks will also see track time.

Siri is assuring all drivers in every class that they will receive ample track time on both practice dates.

Pit Admission is set at $25 per person for both dates and all entrants will be required to wear a mask and social distance. It is still unclear as to weather fans will be allowed into the grandstand seating area for practice, however as time draws nearer for the practice dates as well as the Lucas Nationals set for April 10 NYS regulations regarding outside gatherings appear to be relaxing and a final determination regarding spectator entry will be made as the dates draw closer.

Drivers, race teams and fans are encouraged to keep abreast of all the information relevant to practice along with the season opener by logging onto www.facebook.com/OutlawSpeedwayLLC/. This will include pit gate times as well as any and all protocol should fans be allowed into the main grandstand seating area.

Other information regarding the complete 2021 schedule of events, rules, contacts and directions to the track can be found at www.outlawspeedwayllc.com.