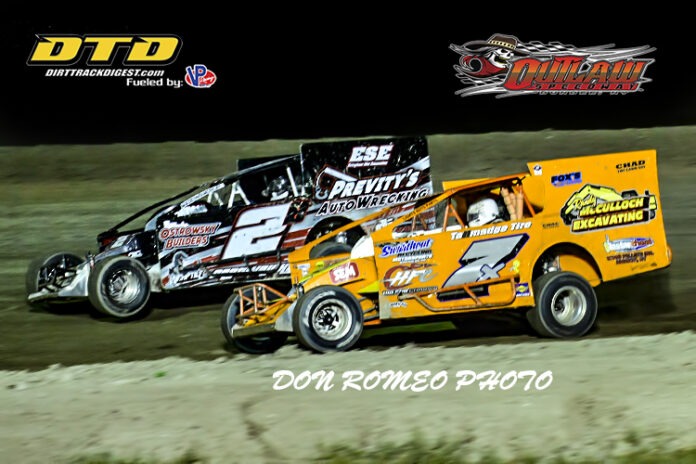 DUNDEE, NY – After an abbreviated 2020 race season due to the COVID 19 virus, Tyler Siri and all his staff of the Outlaw Speedway are more than ready to open the gates for the first official race of the 2021 season.

Outlaw will open on Saturday, April 10, 2021 with the traditional Lucas Oil Nationals with big money on the line for all the classes involved in the Super 7 Show.

The Classy Stan’s No Tubes Street Stock feature winner will claim $1,000.  Also, the participating NAPA Auto Parts Stores Hobby Stocks as well as the Winner’s Circle Deli 4 Cylinder Mini Stocks will race for $750 to win. In addition, and making a rare appearance at the Outlaw Speedway, The Crate Late Model feature winner will walk away with a nifty $1,200.

With the awesome spring whether the Finger Lakes Region of Upstate New York as experienced thus far in 2021 it has made life much easier for Siri and his crew as they prepare the historic facility for the season lid lifter on April 10 right after two previously scheduled afternoon practice dates for Saturday, April 3 and Friday, April 9.

“My crew has worked right thru the entire winter building new rental pit towers as well as the Outlaw Speedway Saloon.  We were able to get on the racing surface earlier than usual due to the break in the weather in early March.  Everything is in place for what we hope will be a much better 2021 than we experienced last season due to Covid.”  That according to owner/promoter, Tyler Siri.

After missing out on the first two full months of race action in 2020 due to New York State’s shut down of most non-essential businesses, Outlaw Speedway was one of just a handful of tracks in New York that opened for business last year with a June 5 start after state officials lifted some of the stringent restrictions.  However, fans were not allowed into the main grandstand seating area throughout the entire year and Siri along with all other racetrack owners across the state are hoping all that will change as the new racing season begins.

Outlaw Speedway was able to get thirteen regular season events into the record books with only one whether related issue and Siri extended the year into a Fall Series which saw an additional five events from September thru late October.

For additional information leading up to the Lucas Oil Nationals on April 10 including pit gate entry, hot lap and race times go to www.Facebook.com/OutlawSpeedwayLLC/.  In addition, up to the minute fan admission information will be posted on the tracks Facebook as well.

The complete 2021 schedule of events, sponsor information, track contacts, rules and directions to the popular Yates County Racetrack can be found at www.outlawspeedwayllc.com.