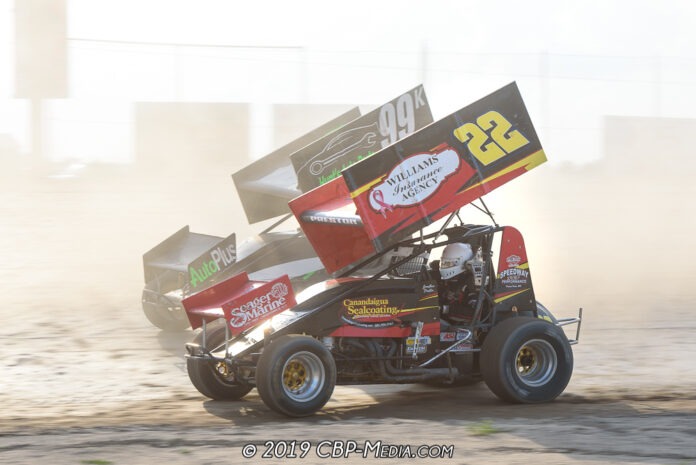 DUNDEE, NY – Like so many special race events in 2020 that were cancelled by an abbreviated season, the Outlaw Speedway will try once again to put the 1st Annual Cindy Lane Memorial Spring Nationals Event into the record books.

“We lost the first two full months last year with the shut down in New York stated Outlaw Speedway owner, Tyler Siri. When we did get rolling in June, we knew with no fans being allowed in that all special events were off the table so with that we ran with strictly regular weekly classes and nothing fancy. One high profile event we lost was the Cindy Lane Memorial Spring Nationals. We felt terrible for the Lane Family as they have been staunch supporters of this facility for fifty years, but it was totally out of our control. Hopefully, we have a great night for it this year.”

Like so many other touring organizations, the Mike Emhoff led Patriot Sprint Tour was virtually grounded throughout most of 2020 and their loyal following of cars and stars are itching to get on the fast Outlaw Speedway as PST will be the host 360 Sprint sanctioning body for the April 16 event.

Historically the Outlaw Speedway has provided plenty of exciting Sprint Car action and because of its long straights and fast corners the machines rocket around the 4/10-mile clay oval at breakneck speeds and 2021 promises to be one of the best seasons yet.
With the Lane’s Yamaha 360 Sprint’s running weekly at Outlaw in 2021 many of the drivers will have had plenty of track time heading into the Spring Nationals as two practice dates on April 3 and 9 will allow racers plenty of seat time to shake off the rust. At the recently held Outlaw Speedway Arnot Mall Car Show presented by Lane’s Yamaha much of the talk throughout the two- day event was the 360 Sprints racing weekly at the historic Yates County Facility and with good reason as Outlaw will be the only venue in the Empire State to host 360 Sprints every Friday night throughout the season.

Like the high-powered Patriot Sprint Tour 360’s, the Friendly Chrysler, Didge, Jeep, Ram Modifieds will also be on the Spring Nationals card with both class feature winners taking home checks for $3,000. Likewise, a huge car count of the Mighty Modifieds is expected at Outlaw Speedway for the event as many high-profile drivers have expressed interest in making Outlaw Speedway their Friday night race place in 2021. Also, on the Super 7 Cindy Lane Memorial Spring Nationals card the Stan’s No Tubes Street Stocks will race for a nifty $1,000 to win. Both the Sunrise Insulation American Racer Tire and the Speed Connection Hoosier Tire Sportsman Divisions will slug it out for a winner’s check of $1,500. Likewise, the NAPA Hobby Stock Class as well as the Winners Circle Deli 4 Cylinder Mini Stocks will see the winner taking home a check for $750.

All gate, hot lap and start times will be posted at www.facebook.com/OutlawSpeedwayLLC/.

Also included will be up to the minute guidelines relevant to fan attendance. With the New York State Governor along with NYS Health Officials guidelines changing regularly all fans are highly encouraged to keep an eye on the tracks Facebook for updates as the event draws closer.

Should weather become an issue for the Friday, April 16 event, a rain/snow date of Saturday, April 17 will be used if necessary

For more information regarding the track, its sponsors, rules, contacts and directions to the facility log on at www.outlawspeedwayllc.com.

For everything you need to know about the Patriot Sprint Tour check out their extensive web site at www.patriotsprinttour.com.