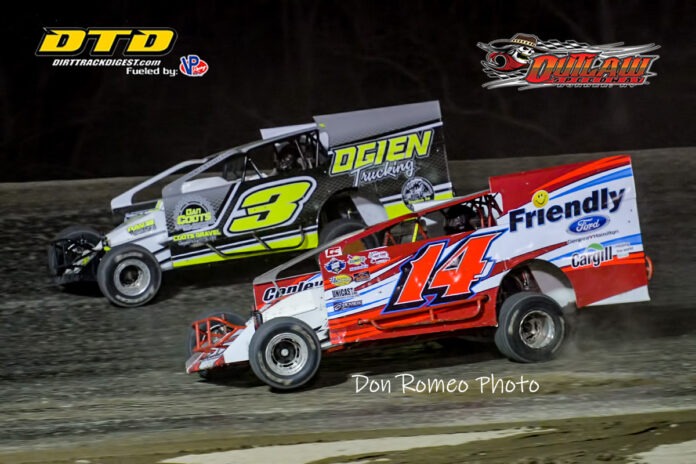 DUNDEE, NY – AJ Slideways, Alan Johnson just keeps rolling along and seems to keep getting better with age as he kicked off the 2021 season at the Outlaw Speedway with a huge win in the Lucas Oil Nationals. With the victory, Johnson was able to extend his consecutive yearly win streak to an amazing 47 straight years as he easily won the 35- lap feature event to open the season at the popular Yates County oval.

By the luck of the re-draw, track owner/promoter, Boss Man Tyler Siri jumped into the early lead which he would hold on till lap five when AJ Slideways would drive by and take over the top position. Only a couple caution flags would slow the pace as Johnson extended his lead over Siri, Nick Nye, The Doctor Danny Johnson and Steve Paine who started twelfth and was up to fifth by the halfway mark. With Alan Johnson distancing himself from the rest of the field and the laps winding down all eyes were on a ferocious battle between Boss Man Siri, Nye and The Doctor with Hurricane Steve Paine looking for an opening. With just a couple laps remaining Nye’s great drive from sixteenth to second began to slip away as he began a backward slide opening the door for both Siri and Doctor Johnson as they were able to get by. With the white flag in the air both Paine and a hard charging James Sweeting were also able to get by Nick Nye and when the final checkered flag waved AJ Slideways had lapped up to the tenth-place machine. Siri was able to hold off his hired gun, Danny Johnson for second as Hurricane Steve Paine finished fourth while Sweeting rounded out the top five finishers.

In the Sunrise Insulation American Racer Tire Sportsman Division Ajay Potrzebowski Sr. picked up right where he left off last season as he was the winningest driver in the class with four feature wins to his credit. Potrzebowski, who started right behind front row starters Tommy Collins Jr. and Travis Grover wasted little time in getting to the point and once out in front never looked back and picked up the win in the Lucas Oil Nationals. 2020 Outlaw Speedway Sunrise Insulation American Racer Tire Track Champion, Karl Comfort tried mightily to grab his first win of the season, but Potrzebowski was just too much to handle, and Comfort had to settle for second at the completion of the thirty-lap affair. Third generation speedster, Alex Payne started the event right behind Comfort in the fourth starting row, ran in the top five the entire event and came home for third at the checkers while Zach Sobotka finished fourth with Kreg Crooker fifth after lining up fifteenth on the original starting grid.

Perhaps the best feature of the night came in the companion Speed Connection Hoosier Tire Sportsman Class. Zach Sobotka among several others that race in both Sportsman Divisions jumped into the lead from his outside pole position starting spot and led the entire thirty lap distance. However, his win did not come easy as Ajay Potrzebowski Jr. put relentless pressure on Sobotka throughout the entire distance. In a real classic battle, Sobotka was on the top while Potrzebowski ran the bottom and the two raced side by side lap after lap and in one case Potrzebowski took over the lead only to have a yellow flag wipe out the lap and thus any chance he had of winning. On the ensuing restart, Potrzebowski Jr. would not give up, however Sobotka was able to hold him off and nail down the win as he looks to defend his 2020 Hoosier Tire Track Championship at Outlaw. Potrzebowski Jr. continues his impressive early start to the 2021 race season in the northeast with a well-deserved runner up finish as he was chased across the line by Alex Payne, Tommy Collins Jr. and AJ Lloyd who would round out the top five finishers.

The Crate Late Models made a rare appearance at Outlaw Speedway for this year’s running of the Lucas Oil Nationals and a good field of some sixteen machines turned out for their feature event. Former Outlaw Speedway Crate Late Model Track Champion, Chad Homan was able to take the lead past the halfway mark and go on to win the thirty- lap feature event. J.J. Mazur who led early after starting on the pole position came home for second as he was followed across the line by 2016 RUSH Crate Late Model Series Champion, John Waters who claimed third. Fourth went to Sean Beardsley while Austin Allen would nail down the fifth spot. The RUSH Late Model Series will make its annual trek to Outlaw Speedway on Friday, May 28 for the $2,000 to win Gary Montgomery Memorial.

Glen Whritenour returned to the winner’s circle in the Stan’s No Tubes Street Stock twenty-five lap feature event. Gene Sharpsteen and Mark Phelps brought the field to Raymond Kennerup’s opening green flag, but it was Dennis Cummings powering from his fifth starting position to take over the lead which he would hold onto thru the first eleven laps. After a fierce battle for the lead, Adam Depuy was able to wrestle away the top spot-on lap eleven as Cummings got shuffled back to fourth. As the lead pack worked turns three and four, Cummings clipped an infield tire launching his machine sideways where he barrel rolled several times before coming to a rest. It took track rescue personnel several minutes to extricate Cummings from his demolished machine, but thankfully he was able to walk away. After the lengthy red flag, Glen Whritenour was able to take the lead away from Depuy and from there GW was on cruise control to pickup the win as he looks to defend his 2020 Outlaw Speedway Track Championship. After a poor redraw, CJ Guererri began the event in twelfth, put on a steady drive and was able to come home in the runner up position while Adam Depuy claimed third. Gene Sharpsteen ran with the lead group all race long to claim fourth while Jared Hill rounded the top five.

Justin Eldredge looked poised to win the NAPA Hobby Stock twenty-five lap feature as jumped into a quick lead from his second row starting position and drove away from the field. Marc Minutolo was able to get to second from his third row starting position but had nothing for Eldredge until a red flag for the rolled over machine of Jimmy Grant on the back straight away would bunch the field. One lap later, Eldredge had problems ending a nearly perfect drive relegating the lead to Minutolo who went on from there to take the win. Casey Wagner who lined up along side of Minutolo at the start ran in the top five the entire distance to claim second at the finish as he was chased across the line by Josh Oles and Justin Eldredge. 2020 Class Champion, Wayne Ellison got spun early in the event, however he rallied back to round out the top five finishers. Willy Easling, in his first ever start in an adult division put on a tremendous effort, ran with the lead pack all race long and looked like a sure top three finisher until a last lap, last corner spin relegated him outside the top five.

The Winner’s Circle Deli 4 Cylinder Mini Stocks was the last class to take to the speedway for the Lucas Oil Nationals. Veteran competitor, Ray Hyer had luck on his side by drawing outside pole position as he and Cole Susice brought the field to the opening green. Hyer jetted into the lead and would never look back in the twenty- five lap feature as he led the entire distance and with the win looks poised to stake his claim to the 2020 Outlaw Speedway Track Title when the points officially begin on April 23. Dante Mancuso capped off a great weekend of racing by backing up his Friday night dash win with a solid second place feature finish behind Hyer as he was followed across the line by Andy Schumaker, Brad Whiteside and 2017 Trach Champ, Mike Stone.
Congratulations to all winners.

Up next at Outlaw Speedway it is the Cindy Lane Memorial Spring Nationals on Friday, April 16 as the Patriot Sprint Tour 360 Sprints will make their first appearance at the track in 2021. Also, on the card it will be the Modifieds, both Sportsman classes, Hobby and Street Stocks along with the Mini’s.

All gate and start times along with protocol pertaining to fan participation will be posted at www.facebook.com/OutlawSpeedwayLLC/.

The complete 2021 schedule of events, news, rules along with other valuable information is a click away at www.outlawspeedwayllc.com.