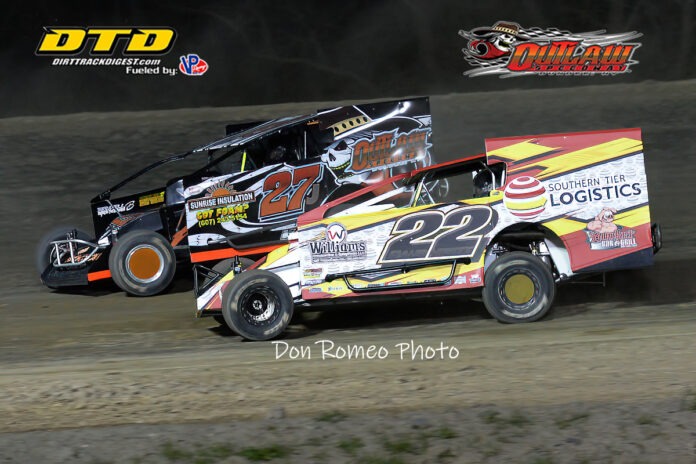 DUNDEE, NY – After a week of rain and snow things dried out very nicely with plenty of sun and high winds on Friday as the Outlaw Speedway made it three weeks in a row with exciting race action.

Danny Johnson was scheduled to be racing at Bristol over the weekend in Super Dirtcar Modified action, however engine woes found the Doctor making a quick trip back to upstate New York just in time to climb aboard his Tyler Siri owned Big Block Modified and went on to pick up his first feature event at Outlaw Speedway in the Friendly Chrysler, Dodge, Jeep, Ram Modified Division.

Dillon Groover led the opening nine laps from his front row starting position, but on a lap ten restart the Doctor made a bold move to wrestle away the top spot and from there he led throughout the remainder of the thirty- lap event to claim the win.  Bobby Varin, making a rare appearance at Outlaw driving the Jordan Siri machine on this night stormed thru the field from the ninth starting spot to pass Groover and Tyler Siri and challenge The Doctor for the race lead.  With eight yellow flags to slow the pace, Varin had several cracks at Johnson, but could not quite muster up enough bite to overtake the lead and had to settle for second at the end as he was chased across the line by his car owner, Bossman Tyler Siri and in doing so making it a Siri Motorsports 1, 2, 3 finish.  Groover ran right in with the lead group all race long and settled for fourth while Hurricane Steve Paine would round the top five finishers.

The highly acclaimed Lanes Yamaha 360 Sprints made their first appearance of the year as fourteen cars took to the fast four tenths of a mile clay oval.  In the twenty-five lap A Main Paulie Colagiovanni would jump into the early lead from his front row starting spot and never look back as only one caution would slow the pace on lap twenty and by then Colagiovanni had already lapped up to the seventh-place car.  On the ensuing green he once again opened a commanding advantage and would go on to claim the Inaugural Lanes Yamaha 360 Sprint Feature Event at Outlaw Speedway in dominating style.  Last weeks PST winner, Davie Franek came from middle of the field to claim second at the double checkers as he was followed across the line by Jared Zimbardi who lined up one spot ahead of Franek on the opening grid.  Jordan Thomas continues to impress at Outlaw as he rounded out the top five after a good run with the Patriots in last week’s Cindy Lane Memorial.

Alex Payne continues his dominance in Crate Sportsman action coming right back this week and taking the win again in the Sunrise Insulation American Racer Tire Sportsman Division.  Stacy Jackson and Justin Schenck brought the nineteen-car field to the opening green with Jackson leading laps one thru three before Payne would shoot by and take over the top spot which he would never relinquish.  Seven caution flags slowed the twenty-five-lap event, but nothing was going to stop Payne from making it two in a row on American Racer Tires.  At the completion Ajay Potrzebowski was just able to nip Karl Comfort for second as the pair duked it out the entire distance.  Stacy Jackson would stay with the leaders throughout and claim fourth while Chris Fisher rounded out the top five.

In the companion Speed Connection DIRTcar Hoosier Tire Sportsman Division Alex Payne was looking to sweep both Sportsman Classes for the second week in a row, but Ajay Potrzebowski Jr. was just too tough to handle on this night.  Potrzebowski shot into a commanding lead from his front row starting spot and lead all twenty-five laps in route to win number one on the 2021 season at Outlaw.  With the final of seven yellow flags flying on lap twenty-four it gave Zach Sobotka one last shot at Potrzebowski, but Ajay Jr. was not to be denied on this night as Sobotka had to settle for second after his opening night win.  Third went to Alex Payne who capped off another stellar night.  Fourth found Brett Buono making his best finish of the season while Adam Hilton finished fifth.

Glen Whritenour made things look relatively easy in the Stan’s No Tubes Street Stock twenty lap feature.  GW took the immediate lead off the drop of the opening green and never looked back and with the win remains undefeated thus far in 2021 with three straight wins.  Kurt Stebbins made a rare appearance at Outlaw, had plenty of car but was no match for the high flying Whritenour and settled for second with CJ Guererri coming thru the field for third.  Gene Sharpsteen nailed down the fourth spot after a fierce battle with Guererri and Adam Depuy who would claim fifth at the end.

Kenneth Evans led all twenty laps of the Winners Circle Deli Mini Stock feature event to pick up his second straight feature win at Outlaw Speedway in 2021.  Evans had to keep his composure thru five cautions flags and a fierce battle with Bob Doolittle to claim the victory.  Scott Lehman dogged the lead duo the entire distance and was able to squeak by Doolittle at the finish line to claim second with Doolittle taking the third and final podium spot.  Chris Force would run in with the lead pack all event to claim fourth while Mike Stone recovered from an early event spin to come thru the pack to take home the fifth position.

Like Glen Whritenour, Alex Payne and Kenneth Evans before him, Justin Eldredge was also able to make it back-to-back trips to victory lane as he moved past then race leader, Wayne Ellison on lap six and hold on for the win in the NAPA Hobby Stocks.  2020 Hobby Stock Track Champion, Wayne Ellison’s bad luck continued for the third straight week as this time he did a slow roll over onto his top right after loosing the lead to Eldredge.  Ellison exited the car unhurt, but his damaged machine had to be cradled off the track.  After the lengthy red flag, Eldredge went right back to work holding off a late race rally by rookie contender, Willy Easling who once again proves he can run with the best in the division.  Opening night winner, Marc Minutolo came home third followed across the line by Brian Lloyd and Jamie Eldredge Jr.

Congratulations to all winners.

Up next at Outlaw it will be a Super 7 Show on Friday, April 30 and it is also Little league Night at the track.

All pit and grandstand gate times along with admission prices will be posted throughout the week at www.facebook.com/OutlawSpeedwayLLC/.  The first green flag of the night waves at 7:30 pm.

For more information including the complete 2021 schedule of events, rules, points, sponsors and directions to the track log on at www.outlawspeedwayllc.com.

For those that can not attend Pay Per View observing is available for just $19.95 with all the details how to subscribe on the tracks Facebook.